Divvy Coffee & Buns brings flavors from around the world to Oakland 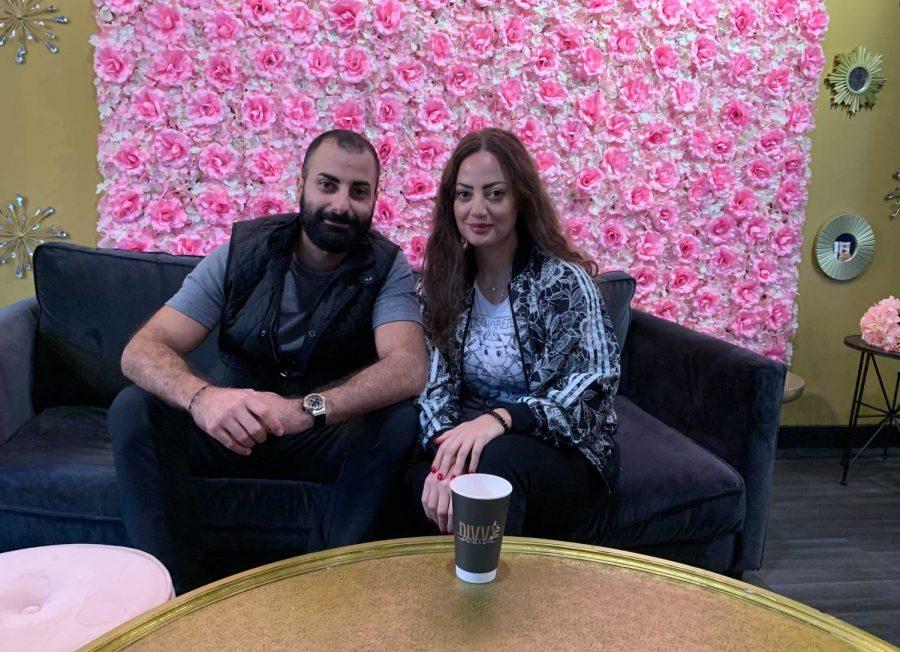 Joelle Sakr and her brother Elie Sakr are the owners of Divvy Coffee and Buns, a new coffee shop on Forbes Avenue.

Joelle Sakr knew it was time to open a coffee shop when a sign came — a big explosion in Lebanon’s capital, Beirut.

Weeks before the Aug. 4, 2020, explosion, when 2,750 tons of abandoned ammonium nitrate exploded in the city’s port, Sakr walked down Forbes Avenue with her family and noticed a “for lease” sign in the window of the former Bruegger’s Bagels store. She and her brother, Elie, spent their free time during the COVID-19 pandemic honing their idea to open a coffee shop, so Joelle Sakr decided to call about the vacant storefront.

But then the blast came — killing 200 people, wounding 6,000 and, in the process, destroying her sister’s house. Joelle Sakr packed up her belongings in Cranberry Township, located about 30 minutes north of Oakland, and flew to Lebanon to visit her family. When she returned to Pittsburgh in September, she had a decision to make.

“I saw that everything was shattered in a fraction of a second and how people lost their lives and their houses, their businesses, everything,” Joelle Sakr said. “I’m like, ‘I cannot wait for the right time, there’s no right moment. Either you do it or you don’t do it.’”

Sitting in a fuchsia chair inside Divvy Coffee & Buns, which she opened with her brother seven weeks earlier, Joelle Sakr said she wanted to create an alternative to the commercial coffee shops typically found in the City.

“Whatever coffee shop you walk to, especially around Pittsburgh, for me, they all look sorta alike,” Joelle Sakr said. “I was trying to bring something new that people would stop and say, ‘This is a little different.’”

Sakr said she designed Divvy, decorated with a pink flower wall and framed maps, to have a European influence and emphasis on travel.

Having dreamt about opening a coffee shop for the past 10 years, Joelle Sakr put thought into each decision. She sat on the velvet couch — where she’s seen students doze off — to make sure it felt comfortable, and picked black tables and shimmering gold chairs to resemble what she described as “Pittsburgh, but trendier.”

Now Joelle Sakr spends her time at Divvy making coffee, chatting with customers and placing fresh flowers at the coffee station. She said she wants people who enter the shop to feel at home — a desire that comes from moving to Pittsburgh as a teenager and feeling welcomed.

“Even though maybe for a couple of months I had that cultural shock, later on, I found everybody’s super supportive and everybody’s very welcoming and very nice to you,” Joelle Sakr said.

Raised in a family with a love for coffee and traveling — their first job after arriving in a new city is looking for a coffee shop — Joelle Sakr noticed Pittsburgh lacked the coffee shops she saw in other cities which give off an international vibe.

In the kitchen, Elie Sakr and his wife Leila bake brioche using a Sakr family recipe that’s been passed down for generations. It serves as the bun for sandwiches on the “Destination Savory Heavens” menu, but when stuffed with butter and topped with a coffee crust, becomes the base for the coffee buns served on the “Destination Sweet Paradise” menu.

Each sandwich and coffee bun — inspired by cities where the Sakrs have traveled, want to visit or know people — combines their Lebanese brioche recipe with ingredients typically found in other cities around the world.

The “Sweet Paris” offers customers a taste of France, with a coffee bun topped with Nutella, strawberries, bananas, hazelnuts and whipped cream. Go with the “Evening in Roma,” on the other hand, and they’ll get a coffee bun with sweet cream, drizzled with dulce de leche syrup and topped with a biscotti.

Sandwiches, like the “Habibi Beirut,” offer customers something not as sweet but — with mozzarella cheese, fresh mint and tomatoes — something they still can’t find anywhere else in Pittsburgh. Those who don’t like bread can get a salad or acai bowl, and those there for the drinks have choices ranging from lattes and frappuccinos to flavored teas and Turkish coffee.

Coffee buns and sandwiches, which cost $6.99, can be paired with a suggested drink for a total price starting at $7.50.

“It’s a tradition in our family just because we love coffee that we always had the coffee bun with everything,” Joelle Sakr said.

This is where the name Divvy — referring to coffee divvied with a bun — comes from. But aside from a nuanced menu, Divvy also offers customers a place to eat and work.

Juliet Serra, a first-year environmental studies major, said she got breakfast with a group of friends the first time she went to the coffee shop. She returned the next day for the same thing — a sausage egg and cheese sandwich — and a place to study.

“It’s on the way to where I have to do my psych study so I was like, ‘I’ll just stop here first,’” Serra said. “And it’s more substantial than Starbucks so I figured I would get something that felt like actual food.”

Joelle Sakr said Divvy gets the most traffic from 10 a.m. to 1 p.m. before lightening up in the afternoon, as some people study and others chat. In the future, she wants her coffee shop to be a place where customers know each other and feel comfortable interacting.

“I want everybody that comes here to be connected somehow,” Joelle Sakr said.

She’s already seen this happen with some of her staff who, despite not knowing each other prior to working at Divvy, spend time together outside work.

“Friendships, they’re forming,” Sakr said. “I feel like my vision somehow, even if it started with my employees, is being real.”

Still, Joelle Sakr envisions more happening at the shop — she wants to add new items to the menu and bring in a jazz band to play one night. First, though, she said she’s focused on hiring more staff.

“I’d rather wait until we’re fully ready in the kitchen, behind the bar, until everybody’s trained the right way on how we do things, and then we will start coming up with newer ideas,” Joelle Sakr said. “But I don’t want this place to be boring.”

Elie Sakr also has plans for Divvy, specifically to expand to more locations.

“This is a smaller thing than what we were thinking. I want to see it go to the next level, especially in Pittsburgh,” Elie Sakr said.

But for right now, Elie Sakr said he’s focused on serving coffee buns — Lebanon topped with a little Paris or Rome, and served in Pittsburgh.

“I’m working on that bun to get it to people the way that we need it,” Elie Sakr said.