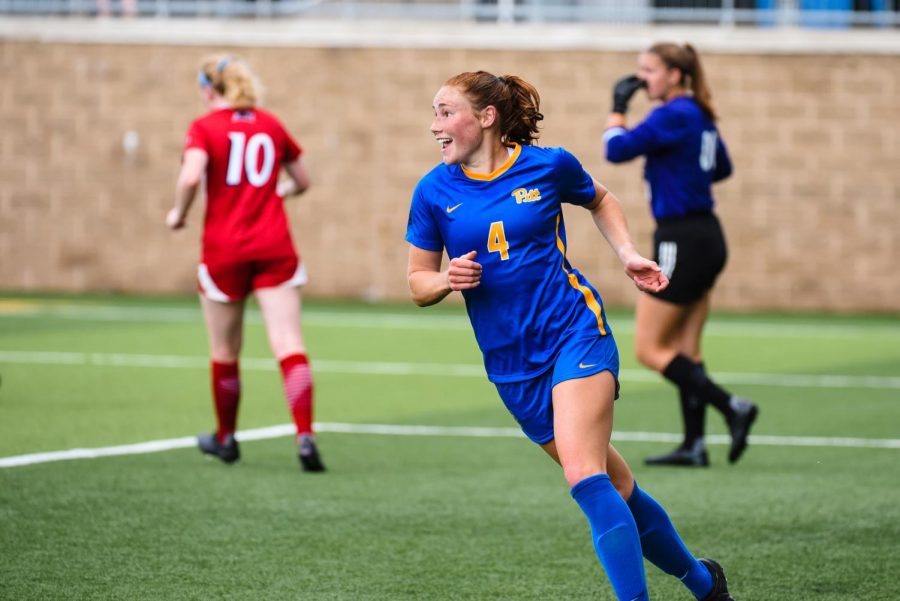 Ellie Coffield is a first-year midfielder on the Pitt women’s soccer team.

First year Ellie Coffield threaded a pass through a crowd of three Towson defenders, finding the foot of junior Anna Bout against all odds. Bout lofted the ball toward the goal and first year Sarah Schupansky found the back of the net, heading Bout’s pass past the goalkeeper.

With the goal, the pair of first years gave Panther fans a glimpse of what could be a staple in the starting lineup for years to come. With 12 of the 34 players on the 2021 roster hailing from western Pennsylvania, including Coffield and Schupansky, the Pitt women’s soccer team has deep ties to the area.

Coffield went to Mars Area High School, located about 35 minutes north of Oakland. In each of her last two years at Mars, she was named the Gatorade Pennsylvania Player of the Year — an award that recognizes the nation’s most outstanding high school athletes.

Coffield’s parents both played for the Panthers — volleyball for her mother, football for her father. But she said her staying in Pittsburgh was never a priority for them.

“It was certainly always in the back of their minds for sure, but they were never really pushing me to go here,” Coffield said. “They wanted me to go wherever I wanted to go. Pitt checked off all the boxes for me, and it’s really cool to keep the family tradition going.”

They also represented Pittsburgh as members of the Pittsburgh Riverhounds Academy, a training program for young players that partners with the professional team. Now playing for one of Pitt’s sports programs, Vukas said that she’s always rooted for the City’s athletic success.

“I definitely bleed black and gold,” Vukas said. “I wore that for the Riverhounds, at North Allegheny, to just being in Pittsburgh, those are my colors. Every single team in Pittsburgh, I’ve always watched and still root for.”

Although their Pittsburgh connection brings players from the area together, they haven’t always been friendly. Schupansky said she’s faced off against many of her current teammates at some point in her high school career — sometimes in high-stakes games.

“When we were [first years] we played against Emily Harrigan in the state playoffs,” Schupansky said. “We played against Eva Frankovic, Katelyn Kauffman and Lacey Bernick in the WPIAL final. We were all pretty much committed, playing against each other, and being on the same field with them was a really cool feeling because I knew I’d be with them in a few short years.”

Growing up near Pittsburgh meant that Coffield, Vukas and Schupansky had a front-row seat to see the Panthers’ progression — evolving from a bottom feeder into a future powerhouse. Coffield said despite the program’s tenuous past, the current coaching staff helped to sell her on a bright future.

“The coaches, Randy Waldrum along with Ben [Waldrum] and Dustin [Stein], they’re really who won me over,” Coffield said. “As soon as they came in they wanted to turn the program around, and everything they’ve said and promised is true.”

Waldrum led the Notre Dame women’s soccer team to two national championships, and also currently coaches the Nigerian national women’s team. Coffield emphasized the impact that playing for Waldrum has had on her as a player.

“I feel like a sponge trying to soak every ounce of what Randy says in, because it’s pure gold,” Coffield said. “He’s one of the most well-respected coaches in the game, and I’m just blessed to get the chance to train with and play for such a legendary person.”

Despite Waldrum’s lengthy resumé, Vukas said that she was unsure about committing to a program with an inauspicious history. After seeing Waldrum’s early success, though, she was sold.

“When I was committing, I was talking to Randy like, ‘What’s the plan on changing the program?’ because I’ve seen how things were before,” Vukas said. “Now being here for nine months and being a part of it, everything is taking a step up, we just keep taking steps forward from where I saw it years ago.”

Playing in the Atlantic Coast Conference, one of the most competitive conferences in collegiate women’s soccer, is another opportunity for the trio to grow as players. Vukas said she watched film on many of her new teammates and opponents from afar as a younger player.

“Growing up, I used to look up to some of the girls I’m now playing against, which is mind-blowing,” Vukas said. “Now we’re on the same field, at the same level. I got to watch my team play against Clemson’s goalkeeper Hensley Hancuff, who I have watched for a very long time. Her demeanor, her presence, her confidence has grown throughout the years and she’s someone I look up to.”

Schupansky said playing in the ACC gives her a chance to improve her game, no matter what happens on the field.

“It’s an incredible feeling to be able to play against some of the best players in the country,” Schupansky said. “Even though we’re not going to walk away from every game with a win, we’re still becoming better going against these incredible players and teams.”

Schupansky said she is just thankful for the opportunity to represent the City she grew up in.