‘Better world for our children’: Crump discusses injustice in America 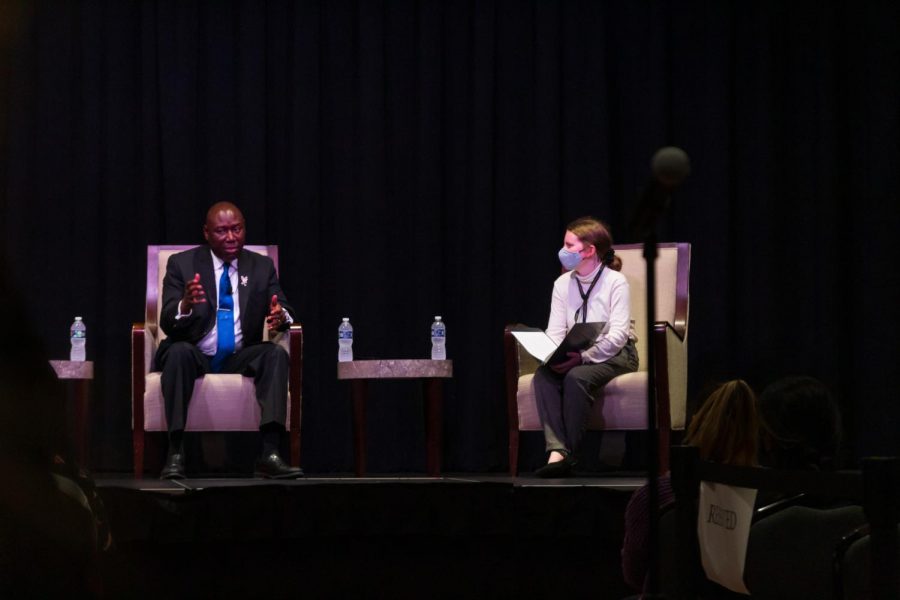 “What we’re really doing is fighting to help make America the great Beacon of Hope and Justice, and to follow the law of the mob,” Crump said. “But most importantly, what we’re doing is helping to make America, America for all Americans and that’s what justice looks like to me.”

Crump said his goal is to inspire the youth to create a more equitable future.

“It is all of you that have to remind America over and over again that we have to make a better world for our children,” Crump said.

Crump represented the family of George Floyd, a Black man murdered by Minnesota police officer Derek Chauvin in May 2020. Floyd’s murder invigorated the Black Lives Matter movement and sparked protests nationwide. The jury in this case convicted Chauvin, who was sentenced to 22 and a half years in prison in June, for the murder. The city of Minneapolis also paid a $27 million settlement to the Floyd family in March.

Crump also represented the family of Breonna Taylor, a Black woman killed by Louisville, Kentucky police officers in March 2020 during a botched raid on her apartment. A grand jury indicted former detective Brett Hankison with wanton endangerment of neighbors whose apartment he hit with gunshots. The other two officers who fired shots were terminated from their positions, but were not charged in Taylor’s death. Crump and his team secured a $12 million settlement to Taylor’s family.

Crump said in the Floyd case, it wasn’t until people demanded justice that prosecutors properly addressed the case.

“It was social media that helped us get justice for Floyd, because the prosecutor had already made the decision that they were not going to prosecute the case,” Crump said. “So it became, as I’ve often said in interviews on CNN and Fox itself, that the problem wasn’t that the prosecutors hadn’t seen the video, because they saw the video on day one, it was when we the people saw the video, when we demanded justice, that change was able to happen.”

Crump said the power of social media has been “tremendous” as a tool for drawing attention to injustice.

“George Floyd’s case would not have galvanized people all across America, but now there are nice people all across the globe who watched that video in complete disbelief that a person could treat another human being like that,” Crump said. “So social media has in many ways provided a certain sense of power in our lives.”

Crump said he attributes his career as a lawyer to his mother and the many impactful experiences he had growing up. He said it’s important to understand that it’s about where you go in life, rather than where you started.

“I think about my mother a lot when I look at my life and I don’t know where I would have been in life, had she not had the foundation and understanding to say, ‘It’s not where you start at that matters it is where you end up,’” Crump said.

Crump said as a kid he had the same resolve as now — to fight for his people and community, which inspired him to become an attorney.

“Growing up in a town that was segregated I saw the unfairness and I always wanted to do something about it,” Crump said. “So as a kid I said I’m going to fight to make people who live in my community and people who look like me have an equal opportunity and the American dream and that was day one for me so that is what I’ve been fighting to do, and that’s why I became an attorney.”

Crump said many families as well as the mothers of people who have lost their lives to violence and police brutality have thanked him for his work, and asked how they can continue to fight for their loved ones.

Crump said he does not have to “sensationalize the data” when he is in a courtroom, but rather allows unjust actions to speak for themselves.

“You know you go into the courtroom, and you say, I don’t have to tell you, we have two justice systems in America, one for Black America and one white because the actions of the court speak so loud that you conclude that for yourself,” Crump said. “Everybody knows what the right thing is to do. The only question always is to have the courage to do it.”

Maggie Shaheen, a sophomore anthropology major, said she had a newfound admiration for Crump’s work after attending the event.

“I’m glad I was able to attend this event because I gained a sense of admiration for him and how he can commit his life to other people who are facing such sensitive and emotionally scarring obstacles,” Shaheen said.

Gabriella Ogude, a senior communication and psychology major, said Crump’s work inspired her as a kid and the University’s ability to get him to speak at the event impressed her.

“He has inspired and propelled the narratives that I needed to see as a Black kid who was suffering, watching these things not get the proper coverage, so because of all of that, I wanted to be in his presence tonight and I was positively surprised by the fact that Pitt was able to pull this off,” Ogude said.

Ogude also said she recommends people who were unable to attend the event to look into Crump and his work.

“He wants to propel forward the health and prosperity of Black people, and not in a way that is unjust, but in a way that is just equal to make sure we get to lives that we deserve and I think people should see that,” Ogude said.

Crump referenced a quote by Ben Franklin about the difficulties of democracy and the role people have in fighting two systems of justice.

“Democracy is like two wolves and a lamb voting on what to happen, and it’s safe to say it doesn’t take a rocket scientist to know how that ends,” Crump said. “And so what we have to do is make sure that the young marginalized lambs are well armed to protest the two systems of justice today in America.”