Robinson’s efforts in net not enough, Panthers fall to UNC 1-0 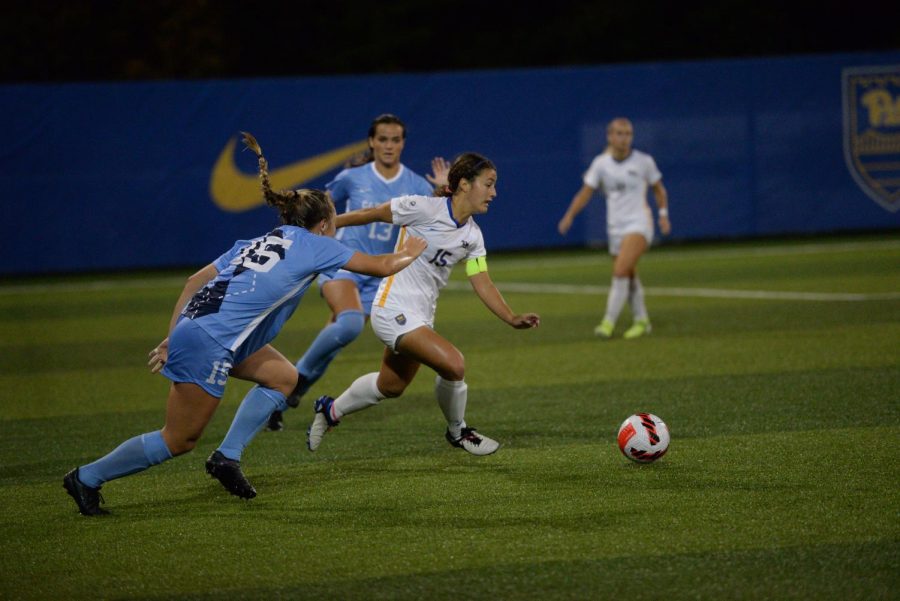 Midfielder Chloe Minas (15) runs to the ball at Ambrose Urbanic Field on Thursday night against UNC. The Panthers lost 1-0.

This was the Panthers’ third game out of their last five against a ranked opponent, and the second against a top-five team. Head coach Randy Waldrum said he knew this stretch of conference games would be tough.

“We know what the ACC is, every team you play is usually ranked or a playoff contender,” Waldrum said. “We play 10 games, and every team can do this to you, so it’s nothing new.”

The Panthers and Tar Heels played a scoreless first half, but both teams had several chances to break that tie throughout the frame.

The first great chance for the visiting Tar Heels came in the 15th minute. First-year midfielder Emily Colton collected a deflected pass, turned around and fired a shot towards a seemingly open net. But Pitt senior defender Kate McKay was lined up near the post and deflected the shot away from the 18-yard box.

The next great chance for UNC came in the 29th minute, when Colton wound up and fired the ball from a little more than 20 yards out. The shot forced Pitt senior goalkeeper Katherine Robinson to make a jumping save, pushing the ball out of bounds for a corner kick. The Tar Heels took the corner and very nearly broke the ice, but the ball bounced off the post and into Robinson’s hands.

Robinson came up huge for the Panthers despite the result. She made seven total saves and kept the Tar Heels scoreless throughout the first 80 minutes. She matched the energy of the team and didn’t shy away from the action.

“These are the games I love to play, when I’m constantly busy and on my toes,” Robinson said. “And seeing everybody else fight tooth and nail makes you want to do that too.”

Pitt only registered two total shots in the first half, with just one shot on goal — a weak one from junior midfielder Anna Bout outside the 18-yard box in the 41st minute. In contrast, the Tar Heels shot the ball nine times, with two going on net.

The second half started with a few wide shots here and there, but the Panthers eventually found a chance in the 64th minute. They had earned themselves a free kick within shooting distance of the goal, and junior defender Athalie Palomo lined up to take the set piece. She bent her shot around the UNC wall but it just went over the crossbar by inches.

Pitt shifted the momentum for a couple minutes after the free kick, but they wouldn’t register another shot for the rest of the match. Waldrum knew that a stingy defense would come with a top-five program like UNC.

“They have great players and a great team and they’re relentless in what they do,” Waldrum said. “We know in these games you’re going to get a few chances and you have to take advantage.”

The Panthers made another team save in the 80th minute. This time, junior defender Ashton Gordon filled in the empty space in the goal to deflect the ball out of play. Controversy struck a minute later.

On the ensuing corner kick, the ball went into a sea of players then bounced off the crossbar, off the goal line, then out of the box. Several UNC players believed that the ball crossed the goal line and expressed their concern to the referees. The refs decided that the play was close enough to go to video review.

They came out of the review about five minutes later and confirmed that the ball crossed the line. UNC sophomore forward Avery Paterson got credit for the goal, and gave the Tar Heels a 1-0 lead that they didn’t relinquish.

Robinson claimed she couldn’t see the ball, so she wasn’t sure if the ref’s ultimate call was correct. But Waldrum saw the replay and had some choice words about the call.

“The ball was not in,” Waldrum said. “I’m pissed at the officials, they changed a game we should still be playing in overtime right now. I’m very very disappointed in that piece of the night.”

The Panthers will look to shake off their loss as they go on the road for their next game against the No. 4 Duke Blue Devils. This game will stream on ACC Network Extra at 2 p.m. on Sunday.