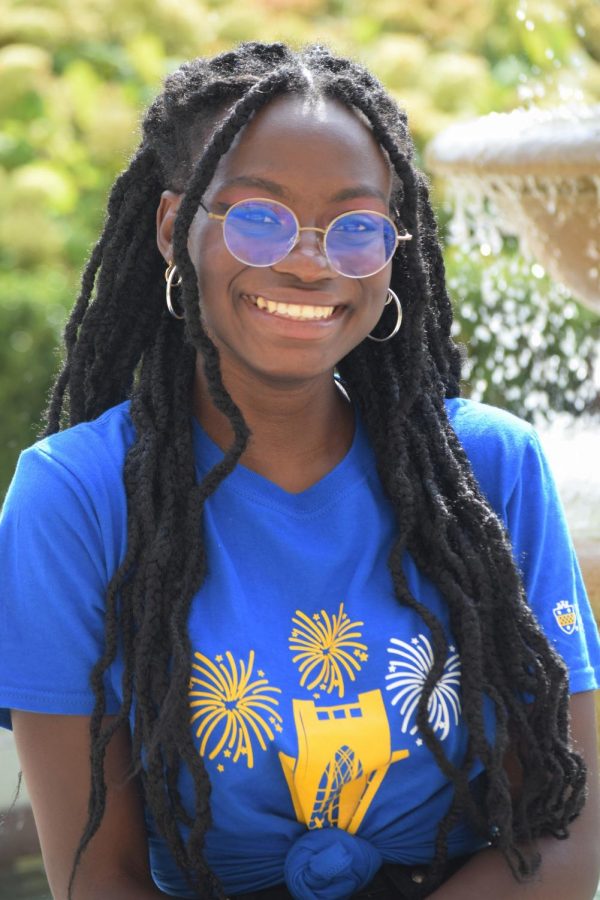 Danielle Obisie-Orlu is the youth poet laureate of Allegheny County. Obisie-Orlu, who is involved in an extensive amount of activities, said performing her poetry is the most fulfilling yet.

For Danielle Obisie-Orlu, there are three values she holds dear. Allegheny County’s new youth poet laureate said she works to incorporate empathy, understanding and passion into her work and life.

Obisie-Orlu, a junior international and area studies and political science major, applied for the youth poet laureate position after finding the application on the website for City of Asylum — a non-profit organization that houses writers exiled from their countries for controversial writing. The application consisted of a brief biography and a few poetry samples.

According to Erin Roussel, City of Asylum’s special projects manager, the youth poet laureate receives $500 as well as opportunities to perform locally throughout their year of service with City of Asylum. Obisie-Orlu also will also be entered into the Northeast Regional Youth Poet Laureate competition and publication in the National Youth Poet Laureate Network anthology.

The county youth laureate program is supported by a RADical imPAct Grant from the Allegheny Regional Asset District and partnership with Urban World, which leads the National Youth Poet Laureate Network.

Obisie-Orlu said she was stunned to receive the position, and she didn’t have a large emotional reaction until after her first poetry performance as the youth poet laureate at Alphabet City, City of Asylum’s home venue.

“I received the news and I was gobsmacked,” Obisie-Orlu said. “My big emotional moment was after my debut performance on the 29th, I was like woah, this is real, this is incredibly real.”

Allegheny County was not always Obisie-Orlu’s home. She was born in Maryland to Nigerian parents and at nine months old, she moved with her family to Johannesburg, South Africa. She spent the bulk of her formative years in Johannesburg until she moved back to the states for college.

For some, the sudden shift to an entirely different continent at a young age may be a burden, but for Obisie-Orlu it was a blessing. It was in South Africa where she learned the meaning of the word “ubuntu,” which translates to “I am because you are.” The word is a Nguni Bantu term and rose to popularity in South Africa following apartheid.

Obisie-Orlu said the phrase is used to signify that one person’s humanity is intrinsically tied to another. She internalized ubuntu over time and has applied it to every aspect of her life, including art and academics.
“I really really did internalize that message of ubuntu, and in everything I do, I want to make sure I see the substance of a human being. I recognize it, I honor it and I value the dignity that human beings have just by being,” Obisie-Orlu said. “I make sure that is reflected in my academics. My research is on belonging. What I do in art is also centered around empathy.”

Besides her recent success in poetry, Obisie-Orlu has had her hands in multiple other organizations, both on and off-campus. She is a Global Ties mentor, president of the Resident Student Association and a student ambassador for the European Studies Center. She also conducts research through her major centered on belonging and differing expressions of xenophobia depending on regions of the world.

Off-campus, Obisie-Orlu recently performed in a play at the Pittsburgh Playhouse. She is also a member of the local non-profit Alliance for Refugee Youth Support and Education and is part of a United Nations working group.

According to Obisie-Orlu, balancing all of her commitments is a formidable task, but her success arises in large part from her support system. One key member in Obisie-Orlu’s corner is James Earle, her mentor and the associate dean for strategic development and operations in the School of Dental Medicine.

The two met as part of an RSA mentorship program and have since formed a strong relationship. Earle has been working at Pitt for more than 20 years and he said Obisie-Orlu is an anomaly in the amount of responsibilities she takes on.

“I don’t know if I’ve ever seen someone do as much as she does, and I’ve been here a long time,” Earle said.

It was through her mentorship with Earle that Obisie-Orlu started searching for what Earle called “the secret of contentment,” what she said is something that brings one peace and rest. For Obisie-Orlu, her solace comes from those in her inner circle.

“My secret of contentment is really having a solid support system, that is where I find my peace and balance,” Obisie-Orlu said.

Her support system consists of her friends, advisers, therapists, mentors and most importantly, family. One of her family members, and a strong pillar of her support system, is her older sister Immanuela — a senior psychology major.

The elder Obisie-Orlu has seen her sister’s work ethic and tenacity unfold firsthand.

“Danielle is incredibly tenacious,” the elder Obisie-Orlu said. “She keeps herself organized and accountable, and she works extremely hard to give each responsibility the attention it deserves.”

Obisie-Orlu doesn’t just give each responsibility the attention it merits, she puts her all into everything she does. For her, it is part of giving back to the space she has been given.

“If I decided to choose you as my home for the next four years, I will invest all of myself into this space, starting from the campus community and working outwards,” Obisie-Orlu said.

While Obisie-Orlu has already been a part of an extensive amount of activities, performing her art as the youth poet laureate is her next adventure and perhaps the most fulfilling yet. She had her first performance last Wednesday as part of City of Asylum’s Jazz Poetry Festival, where she performed alongside fellow poets M. Soledad Caballero and Joel Dias-Porter at Alphabet City.

Obisie-Orlu said the experience was incredibly rewarding and substantial.

“I sat there afterwards and I said to myself ‘I don’t think there is anything that you have ever done that has recognized the substance of who you are more than what you just did a couple minutes ago,’” Obisie-Orlu said.

Her exact performance schedule is not yet set in stone, but she said there are multiple performances ahead of her until June or July. While these loom on the horizon, Obisie-Orlu said she wants to stay in the moment and appreciate all she has achieved up to this point.

“It seems very corny to say I want to live in the moment, but I want to acknowledge the fact that I’ve just turned 20, done a play with a major playhouse, I’ve done poetry and I’ve been on stage with these incredible people behind me,” Obisie-Orlu said. “For me, there’s a deep need to recognize each space and each moment.”

Obisie-Orlu still has at least one year left at Pitt, but according to Earle, she has already begun to cement her legacy and will continue to create an impact.

According to Obisie-Orlu, the most important thing any person can do in a new space is to fully understand their own voice.