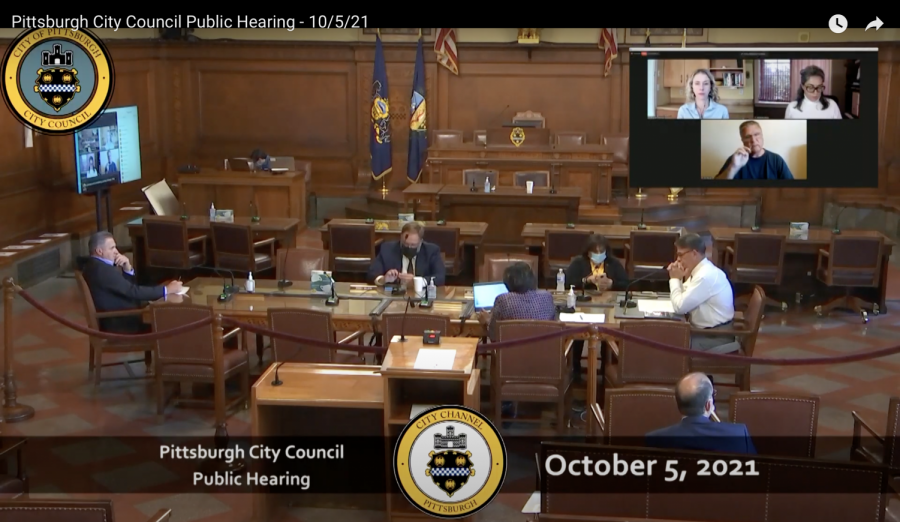 Millie Sass, a long-time Oakland resident, said Pittsburgh City Council should further discuss developer Walnut Capital’s proposal to rezone parts of Oakland because she believes it invalidates work that community members have already put into the Oakland Plan, an ongoing City-led initiative to re-envision the neighborhood.

“Many of us have put countless unpaid hours and hours participating in and to have all of this just be dumped down the drain and say ‘no, we’re going to fast forward on this part of it,’ seems unfair and unrealistic,” Sass said.

After several Oakland residents submitted a petition, City Council held a public hearing on Tuesday to discuss Walnut Capital’s proposal to amend Pittsburgh’s zoning code. The Oakland Crossings plan would rezone parts of Central Oakland to make way for a grocery store, high density walk-to-work housing, a pedestrian bridge over the Boulevard of the Allies and more.

Bruce Kraus, a Council member who represents part of Oakland and led the hearing, asked Council President Theresa Kail-Smith at the end of the hearing to not place the proposal on the Council’s agenda until he follows up with community members who spoke. Kraus also said there is an urgency to utilize $35 to $50 million in federal funds designated for City infrastructure projects, which could be put toward some of Oakland Crossings.

“We have time to do that,” Kraus said. “I have every confidence in this Council to take whatever time is necessary to work through and figure out what’s truly in the best interest of Oakland.”

Around 25 Oakland residents and Pittsburgh community members spoke at the hearing, with most denouncing Walnut Capital’s proposal. Andrea Boykowycz, the Oakland Planning and Development Corp.’s assistant director, said the Council should “take no action” on the proposal, and instead hold it because it didn’t take community input into consideration.

“The bill before you has skipped that process entirely, and started from the wrong end of the line,” Boykowycz said. “Moving this bill to the Planning Commission would set a dangerous precedent for every Pittsburgh neighborhood. Sending this bill to the Planning Commission, you’d be saying, in effect, that our neighborhoods are for sale to developers with political pull and that the public planning process is meaningless.”

Mayor Bill Peduto introduced Walnut Capital’s rezoning proposal to the City Council as a draft ordinance on Sept. 21. City Council held the proposal for a public hearing on Sept. 29. The Council and Planning Commission must both review and approve the ordinance for it to take effect.

OPDC, a registered community organization for Oakland, has adamantly opposed the proposal since its introduction. According to a Sept. 14 statement, the Oakland Crossings project would remove several blocks of homes and apartments. OPDC leaders argue the proposal also ignores the ongoing process to shape the Oakland Plan, which already sought community input about neighborhood priorities.

“To put it mildly, this is not how planning should be done,” the statement said. “Zoning changes of this magnitude require a robust public process. It is unfair to the neighborhood to push for a boutique zone that ignores neighborhood needs for the benefit of a single developer.”

While most speakers said they aren’t completely opposed to parts of the Oakland Crossings plan, they argued the developer did not seek proper community input and rushed into legislation to rezone part of the neighborhood.

Alan Sisco, an Oakland resident, said any stakeholders involved in reshaping Oakland need to take an equitable approach that prioritizes affordable housing. Sisco said his family has lived in the neighborhood for decades, and it’s important to him that stakeholders respect the community’s needs.

“I would like Oakland to be open and affordable for everyone like it was for my family 40 years ago,” Sisco said. “And for that to happen, we need to pay attention and make sure that new development that creates new housing creates housing that is equitable and affordable for not just folks from the suburbs, but for folks from all walks of life and folks who live in Oakland currently.”

Another Oakland resident, Randy Sargent, said Oakland has lost much of its Black population in recent decades. He said apartments to be built for new Oakland residents should not come before low-rent housing for those who already live in the neighborhood.

“In the past years, as I’ve been helping run our after school program, I have seen many families of our program’s kids lose their housing, all families of color,” Sargent said. “After being evicted, I’ve watched families have to find alternative housing in Oakland, to be unable to find anything affordable without a long waiting list. I’ve seen our neighborhood evict kids and parents, separated from each other when they become homeless. I’ve seen our neighborhood’s parents and kids lose possessions on the curb, having no place to bring them.”

Kathleen Gallagher, an Oakland resident whose family has been in the neighborhood since 1914, said Walnut Capital’s process is more “top down than community focused.” She said she is constantly reminding people that “we live here,” and there are permanent residents of Oakland that deserve to be heard.

Elaina Zaitsoff, an Oakland resident of more than 40 years, said Walnut Capital’s process for making these types of zoning changes should take place over years. She said the developer should have done traffic studies, impact studies, public engagement meetings with the Department of City Planning and neighborhood meetings before the Council considers the zoning legislation.

Sass said after living in Oakland for decades, she wants to ensure it’s going to be a place in which her grandchildren will want to live.

“You know, I’ve lived in Oakland for 40 years, and you know, in 40 years, I may not be around, but I sure would like it to be a place where my grandchildren would like to live,” Sass said. “If what happens with what I see with what Walnut Capital is planning, I don’t think that’s going to be true.”

Jonathan Kamin, a lawyer for Walnut Capital, said aspects of the developer’s proposal — such as a grocery store, walk-to-work housing, a pedestrian bridge over the Boulevard of the Allies and more green spaces — were decided upon after several community meetings throughout the year. Kamin said blocking the legislation inhibits Oakland’s progress.

“No process is not process,” Kamin said. “What we are asking for is to allow the legislation to proceed as prescribed by the City zoning code, allow it to go to Council, or go to Planning Commission, allow public comment to take place and then allow it to come back to Council for a vote. That is the way the process works.”

Kamin said the ordinance addresses Oakland’s goals. He said to give Walnut Capital “the chance” to make progress in the neighborhood.

“We have embraced these goals, we have met these goals and most importantly, time is of the essence,” Kamin said. “Because in order to leverage the massive infrastructure improvements that Oakland needs, the $35 to $50 million worth of work that needs to happen, we have a unique opportunity provided to us by the pending legislation and recovery act.”

Wanda Wilson, executive director of OPDC, said it should be public servants, like people working in the Department of City Planning, who should be writing zoning policy, not private developers like Walnut Capital. Wilson criticized Kamin’s statement and said the rezoning process should be more transparent.

“They handpicked goals, and all of those goals that have been put forth have yet to be finalized as actual recommendations in the plan,” Wilson said. “And there is a letter to developers for this sort of interim portion of time while we are planning, but what Mr. Kamin left out is that it actually talks about affordable housing as a priority in our community, and it really is geared toward a development project, like one site, not a whole-scale rezoning of a whole area of the neighborhood.”

Guy Giampolo, an Oakland resident, said he thinks Pitt has a “fishy” involvement with Walnut Capital. He said the Oakland neighborhood is “complex” and the zoning bill is an “oversimplification.” Pitt officials have said the University did not have any involvement in the rezoning proposal.

Pitt is currently involved with Walnut Capital with a few projects in Oakland, including the redevelopment of University property at 3401 Boulevard of the Allies. The University proposed bringing a grocery store and residential housing units to the property, which currently houses a Panera Bread and formerly a Quality Inn and Suites. Walnut Capital is also partnering with the University for the redevelopment of a series of rowhouses, bounded by Bates Street, Boulevard of the Allies and Zulema Street. What will take the place of the Bates rowhouses is currently unknown.

Barbara Warwick, a Greenfield resident, called on the Council to “listen to the people of Oakland” who took time out of their work days to fight for their neighborhood.

Boykowycz said the Council should let the community focus on the Oakland Plan before making any changes to zoning rules.

“The Oakland Plan process is working for Oakland. Let it,” Boykowycz said. “Support the professionals who work for the City, the public servants who have been sweating it out with us for the past two years to solicit public input, identify neighborhood priorities and negotiate the best possible solutions to a ton of really thorny issues.”

Frank worked as a sustainability and resilience intern for the Department of City Planning, which included work related to the Oakland Plan.