No. 2 Pitt volleyball falls to No. 18 Georgia Tech for first defeat of the season 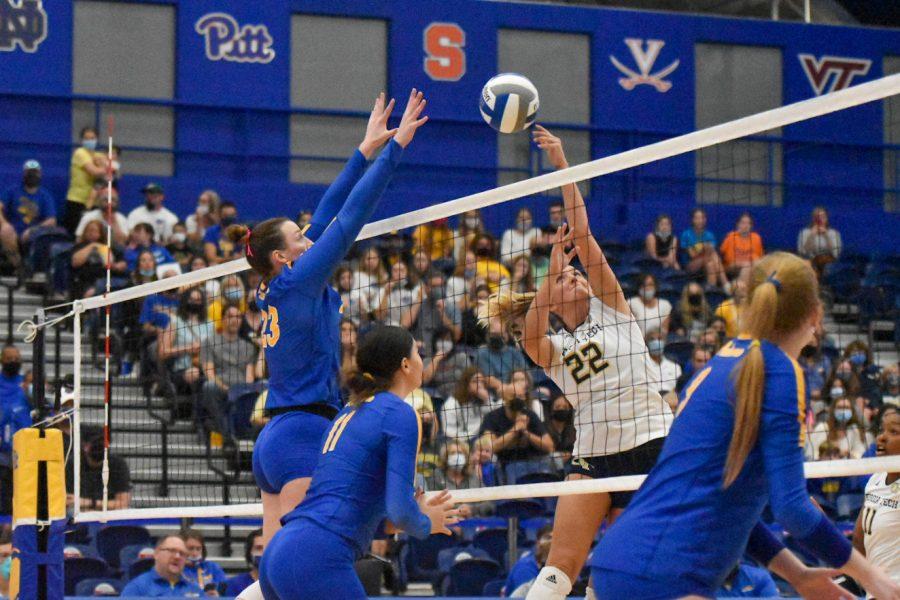 Graduate student Kayla Lund (23) prepares to bump the ball back over the net at Pitt’s volleyball game against Georgia Tech at the Fitzgerald Field House on Sunday.

No. 2 Pitt volleyball suffered its first defeat of the season Sunday to No. 18 Georgia Tech at Fitzgerald Field House. Pitt is the highest ranked opponent the Yellow Jackets have ever beaten.

Riding the momentum of a sweep at home against Clemson on Friday, the Panthers (15-1, 5-1 ACC) came out of the gate strong against the Yellow Jackets (13-3, 4-2 ACC) and jumped out to a blistering 5-0 lead. Strong defense from the Panthers held Georgia Tech to a .167 hitting percentage in the first set.

Senior outside hitter Leketor Member-Meneh impressed in the first frame, leading the Panthers in both kills and digs. She came on strong when the Panthers needed her most late in the set, tallying three kills over the team’s final six points of the game. Georgia Tech’s seventh attack error of the set finalized the 25-21 victory for the Panthers.

Both teams looked even throughout the second set, which consisted of 15 separate ties and eight total lead changes. Georgia Tech was more aggressive on the attack, totaling 19 kills in the set to Pitt’s 12. Junior outside hitter Julia Bergmann had a massive set for the Yellow Jackets, accounting for nine of the team’s kills in the set.

With the set tied at 23-23, the Yellow Jackets continued their strong attack, finishing off the Panthers with two consecutive kills and taking game two 25-23. Fifth-year right side hitter Chinaza Ndee had a strong six kill set in the Panthers’ losing effort.

The Panthers bounced back well from their second set defeat and jumped out to an early 10-5 lead in the frame, later extending their advantage to 19-12. Their lead wasn’t safe, however, as the Yellow Jackets went on a relentless run, taking eight of the next nine points to force a 20-20 tie. It was the first time the Panthers had relinquished their lead since 4-4 early in the set.

Despite giving up the lead, the Panthers got back on their feet, taking the lead once again at 23-22. But Georgia Tech’s momentum swing proved to be too much for Pitt, as they took the last three points of the set and won the crucial third set 25-23 on a Bergmann kill. The 2-1 set deficit was only the second time the Panthers have been behind this season.

Georgia Tech again made a statement in the fourth set, keeping up with the higher-ranked Panthers and riding a four-point swing to go up 14-11. However, this time it was the Panthers who came from behind, taking nine of the next 10 points for a 20-15 lead.

The Panthers managed to close out the fourth set on a strong finishing performance from Member-Meneh, who tallied 3 kills and an ace in the Panthers 25-18 victory.

The decisive fifth set again started out in a slug fest, with both teams going back and forth until the game was tied at 9-9. However, just as they had demonstrated in prior sets, the Yellow Jackets had strong closing power and went on a devastating 6-0 run to take the final set 15-9 and end the Panthers’ hopes of an undefeated season.

The five-set loss drops the Panthers just one spot in the ACC standings and into a tie with Miami (14-2, 5-1 ACC). Pitt will take on the Hurricanes in Coral Gables on Friday to determine which team takes sole possession of second place in the conference. The game starts at 7 p.m. and will air on ACC Network Extra.