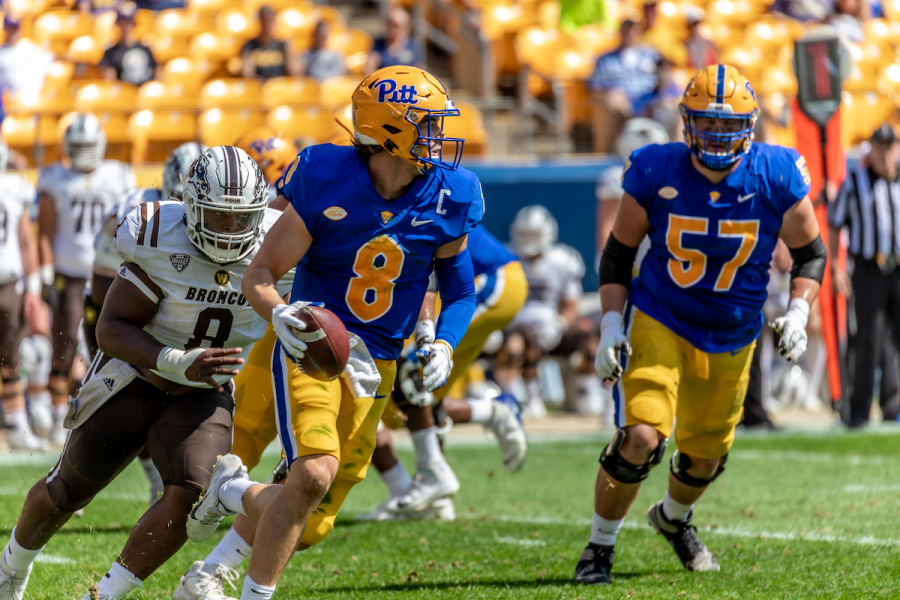 Kenny Pickett eludes the defensive rush at the Pitt vs. Western Michigan game.

“Kenny Heisman” was formerly just a playful nickname for Pitt super-senior quarterback Kenny Pickett. But after his extraordinary start to the season, he’s giving that name life and could be in contention for some of the nation’s most prestigious awards.

Pickett has a real shot at winning this year’s Heisman Trophy, an award given to college football’s best player. Major outlets are taking notice of the fifth-year senior’s strong year as ESPN, Yahoo! Sports, Fansided and various other publications mention Pickett in their latest Heisman rankings.

Coming into the season, Pickett’s name didn’t generate much noise in the national media. But after leading the Panther offense to new heights, Pickett has been thrust into the national spotlight. Pitt ranks No. 1 in the country in scoring offense and No. 3 in yards per game.

Pickett sets a high bar for his offense. The veteran quarterback said after Pitt’s week three loss to Western Michigan that the offense sets a goal each week to put up 50 points.

And the offense has done just that. The Panthers offense is averaging a whopping 52.4 points per game through its first five games and are the only team in the FBS averaging more than 50 points per game.

Pitt has scored more than 40 points in five straight games for the first time in program history this season, joining the 2014 Florida State Seminoles as the only other ACC program to do so. Led by future No. 1 overall NFL draft choice and Heisman winner Jameis Winston, this team went on to win the national title.

Pickett spearheads the Panther offense and is putting up numbers as good as any quarterback in the country — if not better. Pickett is first among Power 5 quarterbacks with a 90.1 quarterback rating and 19 passing touchdowns.

He’s also improved this season in completing passes downfield, something he’s struggled with in the past, and ranks in the top five in the nation. Among QBs with more than 20 attempts of 15 air yards or more, no one has completed more passes than Pickett, who has a 65% completion percentage. The next closest is Nebraska’s Adrian Martinez with 52.4%.

Stats could be rattled off all day, but to put it simply, Pickett has been nothing short of elite. Pro Football Network’s Cam Mellor ranked all 130 FBS quarterbacks and Pickett sat on top of the list.

Pickett is putting up the individual numbers to win the Heisman, but team success goes a long way in choosing the award winner. Pitt’s loss against Western Michigan hurts his chances, but if the Panthers take care of business from here on out, Pickett will have as good of a chance to win the award as anybody.

This weekend’s game against the Virginia Tech Hokies looms large as the Panthers and Hokies are the only ACC Coastal teams without an in-conference loss. If the Panthers pick up a win on the road in Blacksburg, it’s hard to imagine a scenario where they don’t win the division and earn a berth to the ACC Championship Game.

When the Panthers take the field the rest of the season, not only will they have the better offense but they will have the best player on the field in Pickett.

The most realistic path for Pickett to win the Heisman is for the Panthers to run the table, win the Coastal division and go on to win the ACC Championship. If that happens, the individual numbers and team success will both be there, making it hard to deny Pickett the award.

Pitt football has been a recurring cycle of mediocrity for decades now. If they finally reach the mountain top and break that cycle, then Pickett’s case will be extremely strong.

It’s important to remember the criteria of the award.

Who better exhibits the pursuit of excellence than Pickett? He hadn’t thrown for more than 13 touchdowns in any season of his collegiate career prior to this season and it took him just four games to eclipse that mark this season. The leap he has taken embodies the aforementioned quote.

For Pickett to make his name of “Kenny Heisman” a reality, he and the Panthers will need to handle business the rest of the way and have little to no room for error.