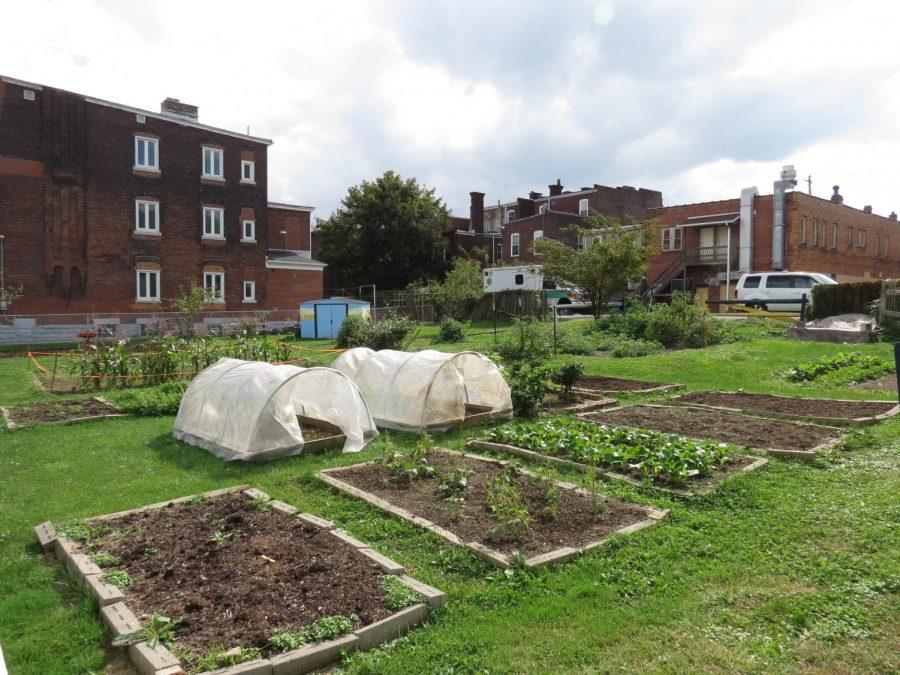 The Plant2Plate student-run garden that produces fruits, vegetables and herbs from a plot of land located on Oakland Avenue, across from Bouquet Gardens.

Pitt may be in the heart of the urban Oakland community, but one University organization has found a way to capitalize on local green spaces — bringing sustainability and fresh produce onto campus and into students’ lives.

Plant2Plate is a student-run organization at Pitt founded in 2014 by two students, Reva Gorelick and Marc Schutzbank, in their Geology 1333 class. Since its founding, the group has cultivated and harvested fruits, vegetables and herbs from a plot of land located on Oakland Avenue, across from Bouquet Gardens. The organization will soon relocate because the University intends to build student housing on their current lot.

Abigail Zolner, a senior environmental studies major and the club’s business manager, said the University promised Plant2Plate one more growing season, from May 2022 through mid-October 2022, on the Central Oakland lot. Zolner said the University is giving them a space on upper campus behind Trees Hall, but the ground is at least a year or two away from being ready for cultivation and planting.

Zolner said the club will use the fall and winter months to fundraise and finalize plans for the new space, such as building staircases for accessibility.

“Right now it is an old construction lot, all dusty and rocky and everything covered in weeds,” Zolner said. “We need to plan for raised beds, and it needs to be accessible. It is on a hill, so we’re hoping architecture or engineering students will get involved to do hillside terraces and vertical gardens. We have a lot of planning to do, but also all of these smart, motivated people who want to help us do it.”

Alvin Liu, a senior molecular biology and history double major and Plant2Plate’s president, said the new location on upper campus will only “hamper” the organization’s work on campus and in the community. He said the group is taking active efforts to combat the University’s decision by hiring a garden manager intern.

Liu said he hopes others will advocate for the group and fight for the recognition he believes they deserve as the University’s only urban garden.

“The garden fulfills an essential role on campus that no other organization meets,” Liu said. “I would like to see it become a permanent fixture on campus, affiliated with and supported directly by Pitt and the Office of Sustainability as other urban gardens are at other universities.”

“Pitt’s Sustainability team is especially excited about the future potential that awaits Plant 2 Plate in its future location on Upper Campus, which presents opportunities for growth, expansion, and community partners,” the spokesperson said. “The University is fully committed to and will continue to provide space for a student garden on our dense, urban campus, just not on Oakland Avenue.”

Despite the year of transition ahead, Liu said the organization is committed to furthering their mission. Liu said Plant2Plate was created to connect students with gardening and educate them on sustainable consumption of food.

“We promote sustainability on campus by engaging volunteers in urban gardening and teaching members of the Pitt community how to maintain crucial green space in our urban environment,” Liu said. “The produce that our volunteers raise is donated to food pantries and delivery services, including the Pitt Pantry, that serve the Pittsburgh community.”

Cecelia Kenawell, a sophomore international relations major, joined the club this year after learning they promoted ethical food consumption. Kenawell said normalizing ethical sourcing options for food is important, especially in an urban environment where people may not view it as a realistic possibility.

“It is insane not knowing who has been exploited to get food to you and not knowing where all of the packaging comes from,” Kenawell said. “There are so many questions that we do not consistently ask ourselves, and I think it is hard to educate people. It is definitely important and to imagine doing that on an urban campus is really cool.”

Zolner said the organization also works hard to combat food insecurity on campus. Zolner said the group donates produce from the garden and engages in community service in order to address the issue.

“Access to healthy, fresh food is super important,” Zolner said. “Maybe you know where your next meal is coming from, but that is not the case for everyone. Sometimes I don’t think we think about that.”

Zolner said the organization’s growth since she joined last summer is exciting, with membership rising from around 90 people in 2020 to more than 300 people in 2021. Zolner said members are coming in with many ideas on how to expand the program and reach more members in the community, and people on campus are beginning to take notice.

“We have people emailing us, we have gone to a global studies certificate discussion and presented there,” Zolner saidy “In October, we are doing one of Res Life’s ‘All Halls,’ which is a two-hour presentation and interactive session. People are hearing about it.”

Liu said he is “thrilled” with the growth of the organization and the effort the team puts in to expanding their impact across the campus and City.

“Plant2Plate’s outreach and community engagement has dramatically increased, and we see regular engagement at all of our garden work shifts,” Liu said. “We have harvested over 300 pounds of fresh produce so far during the 2021 growing season, which is a new milestone for us.”

Kenawell said previous experience in gardening is not necessary to contribute to the organization. She said people of all majors and interests can find a place in Plant2Plate, because their scope goes beyond gardening.

“It really is something that can include a lot of different majors or studies,” Kenawell said. “If you are political and want to be able to talk with community members or the University administration, you can get involved. There is an aspect of this club that stretches across a lot of different disciplines. I think there is a part of it for everyone.”

Kenawell said cooking and baking with food she planted and harvested herself gives her a sense of fulfillment and accomplishment unlike anything else. She said she is even more excited for the events in the works and her ability to be a part of something making real change.

“It really is just all so exciting,” Kenawell said. “We are starting a food blog, we want to make an annual cookbook, and we may even rent out community kitchens and have a night where we all cook together. It is pretty cool to have a say in something like this.”

Zolner said Plant2Plate is a special organization because the volunteers are working toward collective goals that would benefit large groups of people and are willing to put in the effort to make an impact.

“People always do things for resume builders, or money or service hours,” Zolner said. “These members are just doing this because they want to. They literally just want to do this work because it is good and will benefit the greater community.”