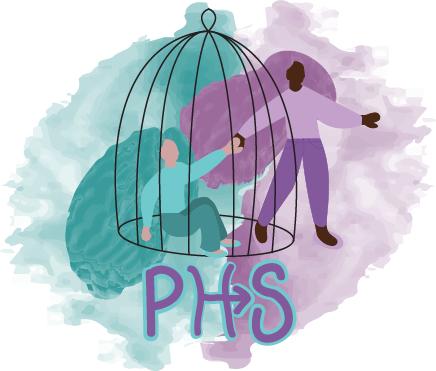 The logo of Project Healing Sideways, a student group that supports survivors of intimate partner violence.

“Most students don’t realize how vulnerable we all are as young people, and it is important to see the risks we can encounter,” Steele, a junior social work major, said. “What a lot of people don’t understand is that there are many long-term effects and risks of domestic violence like [post-traumatic stress disorder].”

In recognition of the month, Pitt is providing a number of resources to employees and students, including numerous workshops hosted by the Sexual Violence Prevention and Education Office. These workshops will teach community members how to support survivors of sexual misconduct.

A report from 2019 by the Association of American Universities showed that 10% of Pitt’s general student body — 15.7% of undergraduate women, 10.1% of undergraduate men and 20.2% of trans men and women, nonbinary, genderqueer, questioning or otherwise gender-non-conforming students — reported experiencing intimate-partner violence.

Because of the many cases of domestic violence on campus, Steele said this month is important because it brings attention to peoples’ interpersonal relationships.

“This month is a good time for everyone because while it plays an important role in raising awareness to an issue that can affect us all, it also gives us a good chance to look into our own relationships and just give a quick check to see if our relationships are healthy,” Steele said.

Carrie Benson, prevention and education coordinator in the Sexual Violence Prevention and Education Office, listed the many resources available to students who have experienced relationship abuse including Pitt’s Office for Civil Rights and Title IX, The Women’s Center and Shelter of Greater Pittsburgh, Pittsburgh Action Against Rape, Peer Survivor Support Network and the University Counseling Center.

Benson said for peers of people who may be a victim of relationship violence, it is important to be supportive.

“Remind your friend that you care about them, support them, and that it is not their fault if they are experiencing abuse,” Benson said. “I would also share information about confidential support resources, such as the University Counseling Center.”

Steele also said it’s worth noting that most individuals are aged 18 to 24 — the same age as most Pitt students — when they first experience intimate partner violence.

“Most individuals who are first impacted by intimate partner violence are in the 18 to 24 year old range which is something that I feel like a lot of people are not very familiar with and is pretty shocking to some individuals,” Steele said. “There’s often the connotation that, just like the name, domestic violence exists in a space like a house or exists in a very heteronormative space, but it’s something that primarily affects students.”

Steele said Project Healing Sideways organizes projects to help people heal within a community. Steele also said the club wishes to emphasize their focus on getting students back on the path toward their academic and personal goals, and do not force students to share their experiences if they do not wish to.

“We provide a space for pretty much anyone to exist, build projects and create a very malleable space where anyone can be a leader,” Steele said. “There’s not a lot of priority given to whether or not someone has a partner violence situation, because we kind of want to set the tone that they are not defined by their experiences.”

According to Steele, this method of project-based healing has been effective for students because it surrounds survivors with a community of understanding people.

“It’s allowing someone to choose whether or not they want to use that experience as their inspiration or really just exist in a space where they know that other people understand and will be accommodating in building projects and sort of doing the things that we need to do as students,” Steele said.

Steele said people need to be aware of domestic violence and intimate partner violence to both see the signs, such as gaslighting, as well as be more understanding towards the victims.

“Unfortunately, a lot of people are going to be affected by something like this in their lifetime and that doesn’t mean that everyone’s going to experience it, but most people are going to know someone who may have experienced it, and understanding that people carry baggage with them is so important, being accommodating is something that has to be learned,” Steele said.

Gayatri Gupta-Casale, a junior neuroscience major and advocacy chair of Project Healing Sideways, said it is important for students, especially, to be aware of the signs of abuse — such as manipulation — because it is a common occurrence amongst the student population.

“For example, gaslighting or manipulation are examples that are not always easy to catch and it’s not something you’re really taught about through school since that’s not really standardized, so it’s important to raise awareness so that you can recognize it in either your friends’ relationships or even in your own relationship,” Gupta-Casale said.

Gupta-Casale said there are many resources available to individuals who have experienced intimate partner violence or domestic violence, and students shouldn’t feel pressured in their healing process.

“There are many resources available including women’s shelters, the Title IX office and clubs on campus such as Project Healing Sideways,” Gupta-Casale said. “It is important to understand that there’s no expectations of where you should be in your healing journey and that these resources are just meant to be a place you can go to feel safe on campus and to talk to other people who might know a little bit more but are also just willing to listen to you.”

“You matter and your story matter,” Benson said. “There are people available and ready to support you in your healing journey.”