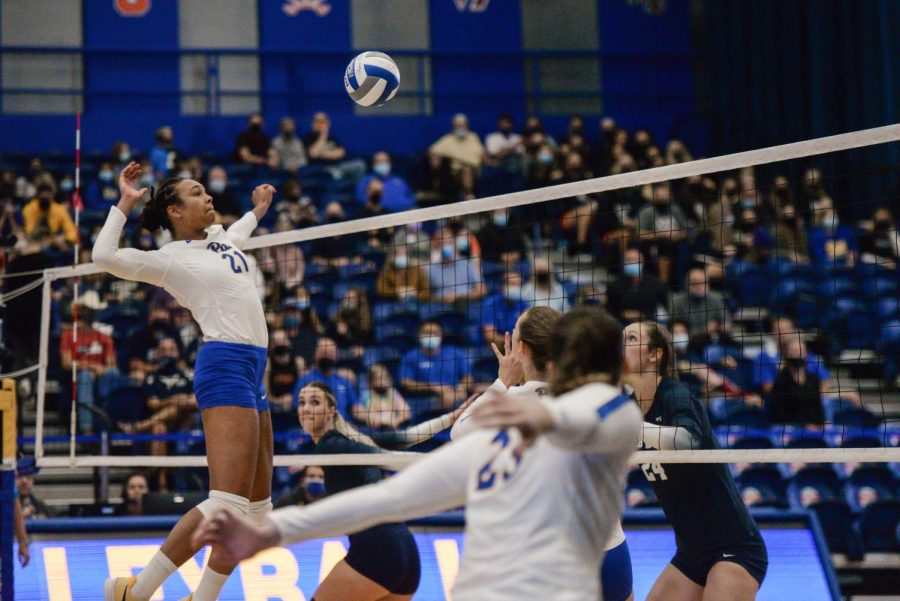 Up 16-15 in the third set and fighting back to force a fifth set, the No. 2 Panthers needed a spark on Sunday. No. 18 Georgia Tech looked strong, winning the last two sets with late game heroics, and were poised to knock off the undefeated Panthers in just four sets.

After being subbed back into the game just minutes before, high-flying senior outside hitter Leketor Member-Meneh gave the Panthers the boost they needed — rocketing the ball past the Yellow Jacket defense. At first the referees didn’t see that a Georgia Tech blocker tipped the spike, but Member-Meneh was defiant and gestured directly at the opposing player who deflected the ball with a finger.

The up ref, who stands above the net, pointed his hand to the Panther sideline just seconds after their cries of protest and the players on the court huddled with renewed intensity — especially Member-Meneh, who made sure to let everyone at Fitzgerald Field House know whose point it was.

The St. Louis, Mo., native made the decision just a year ago to sit out the spring portion of the 2020-21 season for Missouri and enter the transfer portal. She was one of many players across the country who decided that a change of scenery was the right move for their “super senior” campaigns, made possible by the NCAA granting athletes an extra year of eligibility due to the COVID-19 pandemic.

According to Member-Meneh, the transition from one Power Five school to another wasn’t a difficult one because of her decision to opt out the year before.

“There really wasn’t a challenge leaving the program,” Member-Meneh said. “I went a whole year and didn’t play volleyball, I was a regular student.”

Member-Meneh also said she wasn’t the only athlete to leave Missouri, and that the departure of her teammates contributed to her decision to enter the portal.

“Eight of my other teammates left the program as well,” Member-Meneh said. “Everyone that I was really close with no longer goes to Mizzou. I didn’t have to deal with leaving my teammates behind because everyone is spread out across the globe doing their own thing right now.”

On the court, she transitioned well, immediately jumping into the Panthers’ starting lineup. She’s recorded four double-doubles so far this season and is currently third on the team in kills and digs, with 134 and 125, respectively.

Prior to Pitt, Member-Meneh had established herself as a key player for Missouri, earning SEC All-Freshman honors and All-SEC honors in her sophomore year. She believed transferring to Pitt would be the best place to take the next step in her volleyball career.

“I chose Pittsburgh because of the coaching staff,” Member-Meneh said. “I wanted to be challenged, I wanted to see where my potential could go. The team’s great, the coaches are great, the environment is great, the City is great. It just seemed like the perfect fit.”

While she has been a key component on a Pitt team that has been ranked in the top five for most of the season, she is not the only transfer making waves in Oakland. Senior middle blocker Serena Gray has been a force at the net in her inaugural season with the team.

Hailing from Pitt’s archrival Penn State, her departure from Happy Valley came down to a simple desire for something new. Like Member-Meneh, Gray connected with the staff at Pitt and was attracted to the new challenges that came with being a Panther.

“I was looking for something different, a new perspective on coaching,” Gray said. “Somewhere that would challenge me in ways that I haven’t been challenged before in the past three years. I thought Pittsburgh was a great place to start again.”

Arriving at Penn State — a long way from her hometown of Temple City, California — Gray settled in nicely with the Nittany Lions, becoming a two-time Honorable Mention AVCA All-American in 2018 and 2019. In her first season as a Panther, she is already leading the team with 60 blocks and 20 aces. She also narrowly trails Member-Meneh in kills, with 115 on the season.

According to Gray, the decision to leave Penn State was difficult but also exciting and gave her a chance to thrive in a new setting. She said her remaining time in State College after deciding to transfer was the most difficult.

“The biggest challenge for me was knowing I had this great new team ahead of me and I was going to be transitioning while still being in State College,” Gray said. “Still having my job, still being enrolled in classes, I just wanted to move on so badly and was just so excited to come here [to Pitt] that staying there was kind of the hardest part about it.”

For Gray, the decision to come to Pitt was just as much about positioning herself for the future as it was about playing for a competitive volleyball team. She hopes to play professionally after one more season with the Panthers, but is also well prepared to go down other paths.

“I’m either looking to play professionally or go into the working world, something along the lines of childhood early intervention or afterschool programs that are able to support children more than just in academic ways,” Gray said. “You never know what’s going to come out of right or left field but I’m pretty open to whatever comes my way.”

The pandemic and the players’ extra year of eligibility completely changed the recruiting landscape and frequent player movement has now become the norm for top programs, according to head coach Dan Fisher. He said not only have the number of transfers increased, but the transparency of players has been helpful to him and his staff.

“The biggest evolution is the COVID fifth year,” Fisher said. “Now, the volume of quality players that are considering a one-year masters is a lot higher. Before, there weren’t that many players who were in that situation, so for the next couple of years I think it’s going to continue.”

While Fisher puts high emphasis on recruiting incoming first years who he can develop and scout for long periods of time, he also put significant value on the emotional maturity that transfer players can bring both on and off the court. He said how each player adjusts is individualized and can vary depending on their prior experience.

“If someone’s just had the same coach for five years saying the same thing, then there’s a bigger learning curve,” Fisher said. “It just depends on the player and how many experiences they’ve had, but with any change I think more good typically comes out of it. It comes with a chance to reinvent yourself.”

Gray and Member-Meneh are currently setting the bar for the future fifth-year transfers Fisher talked about. There is still plenty of the season left, but so far, their experience and skills on the court have been key factors in the Panthers success this season.

Member-Meneh laughed while talking about her plans after Pitt. While she doesn’t think volleyball is in her future, she’s excited to see the world and hopes to eventually find other passions.

“I’m not playing volleyball any more, these knees just can’t do it,” Member-Meneh said with a smile. “I plan on praying and asking God to guide me to my destination, the start of my next journey. Hopefully that involves travelling.”