Panthers go down to Blacksburg and make a statement, defeat Hokies 28-7 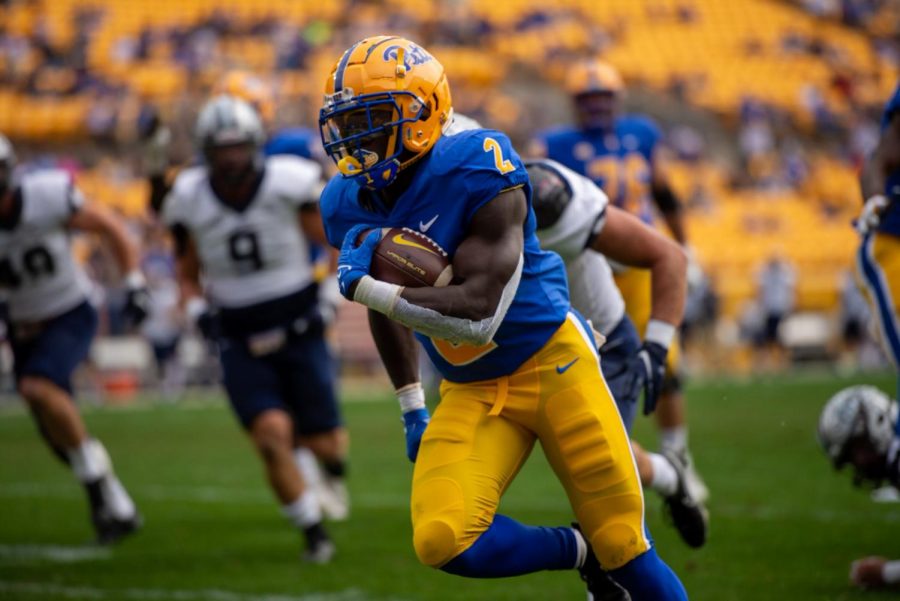 Sophomore running back Israel Abanikanda (2) carries the football against the New Hampshire Wildcats at Heinz Field on Sept. 25.

BLACKSBURG, Va. — Head coach Pat Narduzzi mentioned earlier this week that he didn’t anticipate that Lane Stadium’s typically raucous environment would be an issue for his team — he guessed right. The Hokie fans may have been loud during the team’s entrance to “Enter Sandman,” but by the end of the game, the Panthers silenced the stadium.

Junior linebacker SirVocea Dennis commented on how it felt to see the student section thin over the course of the game.

“I absolutely love it,” Dennis said. “This is why we play the game — coming to environments like this and get a win like we did today.”

The Panthers (5-1, 2-0 ACC) hit the road for a game with major implications and dominated the Virginia Tech Hokies (3-3, 1-1 ACC). The defense stole the show in the contest, holding the Hokies to just 224 yards and seven points. Narduzzi said he was pleased with all phases of the game and found difficulty in finding something to nitpick outside of a few unnecessary penalties.

“It’s a great road win and a great team win,” Narduzzi said. “I’m proud of my kids — I love that locker room … credit goes to those guys, they made all of the plays today… gotta eliminate penalties, really drives me nuts. But besides that it was a great day on offense and defense and special teams.”

Pitt started with the ball but wasn’t able to pick up a single yard on the first possession. Redshirt senior punter Kirk Christodoulou came out to punt but was only able to muster a 26-yard boot, giving the Hokies favorable starting field position.

It looked like the Panthers were in trouble early, but the Panther defense forced a three-and-out of their own to give their offense a quick turnaround and another shot at the end zone. Redshirt senior quarterback Kenny Pickett didn’t waste this second opportunity.

Pickett and the offense embarked on a 15-play, 94-yard drive while eating up nearly six minutes of the clock. Offensive coordinator Mark Whipple gave sophomore running back Israel Abanikanda a few opportunities on the drive that he capitalized on. Abanikanda was given a carry on third-and-seven and converted for a first down. The sophomore running back commented on what it meant to him that the coaching staff called his name in these situations.

Pickett promptly found first-year tight end Gavin Bartholomew in the flats and took it in for a Panther score to get them on the board first. The Panthers have scored first in every game this season outside of their win over Tennessee.

After the first touchdown, it was a battle of the defenses for the rest of the first quarter.

The Panther defense came up big again on the ensuing drive. After picking up a few first downs, the Hokies made their way into Panther territory. But the Hokies stalled and found themselves with a fourth-and-one situation. The Hokies opted to go for it, but the Panther front-seven won the battle up front and forced a turnover-on-downs.

The Hokies only picked up two more first downs the entire first half. Redshirt junior quarterback Braxton Burmeister battled the wind and heavy pressure from the Panther defensive line nearly all half but could not put it together. Burmeister completed just seven passes on 20 attempts for 67 yards and an interception in the first half.

Once the second quarter began, something started to click for the Panther offense and junior wide receiver Jared Wayne in particular. About halfway through the second quarter, Pickett found Wayne down the sideline in a one-on-one battle and tossed up a jump ball. The junior high-pointed the football and wrestled the ball down inside the Hokies’ 5-yard line. Pickett ran it in himself just two plays later to extend the Panther lead to 14.

The very next drive on offense, Pickett and Wayne connected again, but this time it didn’t take another play to put six on the board. Pickett stood in the pocket, absorbed a hit from a Hokie defender and found Wayne in stride who walked in for a 36-yard touchdown. This was the final score of the half, with Pitt leading the Hokies 21-0. Wayne finished the game with 94 yards on six catches.

It was much of the same in the second half as the Panthers completely shut down the Hokies on both sides of the ball. The offensive line cleared the running lanes for Abanikanda, who rushed for 142 yards against the Hokies. Abanikanda credited the offensive line for his big performance.

“[The offensive line] was big,” Abanikanda said. “Just like I told them during practice, ‘I’m gonna need you all every game day, every Saturday,’ and they came through and I thank my O-Line.”

Pickett said the offensive line’s play against the Hokies was paramount to keeping him upright and in helping the team put the game on ice in the fourth quarter.

“Great job,” Pickett said. “Kept me clean and especially in the run game, they were really impressive in the fourth quarter.”

Although the Hokies did score in the third quarter to put them on the board, it would be too little, too late. The Panthers were in cruise control for much of the second half and put this game on ice, to secure a 28-7 victory.

The win gives the Panthers sole possession of the ACC Coastal Division and move to 2-0 in conference play. The Panthers turn their attention to the Clemson Tigers (4-2, 3-1 ACC). The game will kick off next Saturday at 3:30 p.m. and, according to Narduzzi, it’ll be a game fans won’t want to miss.

“The Pitt fans better come out strong,” Narduzzi said. “It’s going to be an epic game in Pittsburgh and we’re looking forward to it already.”