‘You’ve got to be personable’: Pitt students canvass for Gainey across Pittsburgh 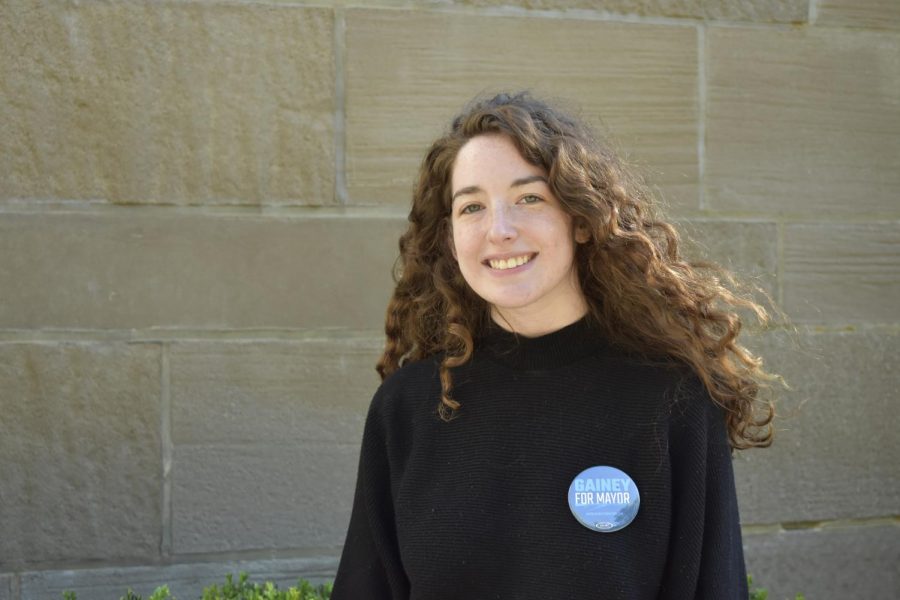 Isabella Veneris is a junior political science and English literature double major, as well as a fellow on Ed Gainey’s mayoral campaign team.

The last thing Will Allison expected to hear when he knocked on a potential voter’s door this month was a bird squawking — but sure enough, when the resident opened his door, he had two parrots perched on his arm.

“We were like, ‘Oh, hi, we’re canvassing for Ed Gainey for mayor.’ And he’s like, ‘Oh, I like Ed Gainey, you want to hold the parrots?’” Allison, a sophomore political science major, said.

Tony Moreno, Gainey’s Republican opponent in the Nov. 2 general election, said he does not currently have any Pitt student volunteers on his staff, though he said his campaign has student volunteers from Robert Morris and Duquesne universities.

While campaign workers canvass for the purpose of convincing potential supporters to come out and vote for their candidate, Reiss Veltri, a junior political science major who is also a fellow, said the goal isn’t to attack or debate an individual voter’s political views.

Veltri and Allison both said they got involved with Gainey’s campaign before the May 18 primary election — working as unpaid fellows before it became a paid position at $15 an hour. Veneris said Allison recruited her to join the team in early September.

As a political science student, Veltri said he had been looking for opportunities to get more involved with local politics before he joined the Gainey campaign. He said he has enjoyed the work he’s done with the campaign and hopes to continue with others in the future.

“I would love to work on other campaigns,” Veltri said. “It’s so cool. I’d love to slowly climb the ladder of campaign staffing and figure out what it is and try to make a difference individually.”

Veneris, who works as a barista at a local Starbucks besides completing her coursework, said she doesn’t have any trouble finding the time for the fellow position. She said she must work at least 10 hours each week, and she is able to fit them into her schedule without issues.

“I do think this position is really flexible,” Veneris said. “It allows me to work whenever I’m able to get away from school, and it doesn’t impede on my ability to actually go through my assignments and do any work.”

Sharing the same political stances and values as Gainey — such as supporting unions and challenging UPMC’s tax-exempt status — makes it easier to talk about his platform passionately, Veneris said. She said those who wish to work on a political campaign should take the time to find a candidate they truly believe in.

“I would say if you would love to get involved in a political campaign, make sure you really care about the issues and make sure you pick a candidate that you think represents you and your values,” Veneris said.

Allison said the Gainey campaign staff has an equal and free-flowing exchange of ideas, and more experienced staff members encourage student workers to contribute meaningfully to the campaign.

“People from above are very willing to listen to ideas from people below,” Allison said. “For example, if I have an idea, I feel very open to suggest it to … the field organizer. And she’s very willing to consider or put into place an idea that one of the interns [fellows] has had.”

Veltri said he volunteered for Joe Biden’s presidential campaign for two weeks last fall. Compared to a national campaign, he said there is more personal connection, but fewer resources and less structure in a local mayoral campaign.

“I never got to meet Biden in person — I get to meet Gainey every once in a while,” Veltri said. “They were really concise with how we were getting things together and stuff. For our campaign, a lot of people are newer and stuff, and so we’re still feeling out the correct methods and stuff with organizing … we don’t get as many volunteers, so we have to make do with what we have.”

Canvassing in Pittsburgh means connecting with people from communities that have been neglected by the City government, according to Allison. He said it was heartbreaking to see the way the City had treated predominantly Black communities such as the Hill District, Homewood, California-Kirkbride and Marshall-Shadeland.

“I’ll go into places and you’ll see half the homes are vacant, or you’ll see these buildings that were condemned 20 years ago and nothing has been done with them,” Allison said. “I mean, that’s criminal. Like it’s, it’s seriously, it’s criminal.”

Veltri said engaging face-to-face with Pittsburgh residents through the campaign has helped him learn more about the City’s demographics and the impact of various political issues. He said it gives him perspective on how politics play out in the real world.

“People are really individually affected by these issues,” Veltri said. “It’s really cool to see people either appreciating what you’re doing, or people who are seeing the negative effects of what you’re doing, which is just as important.”