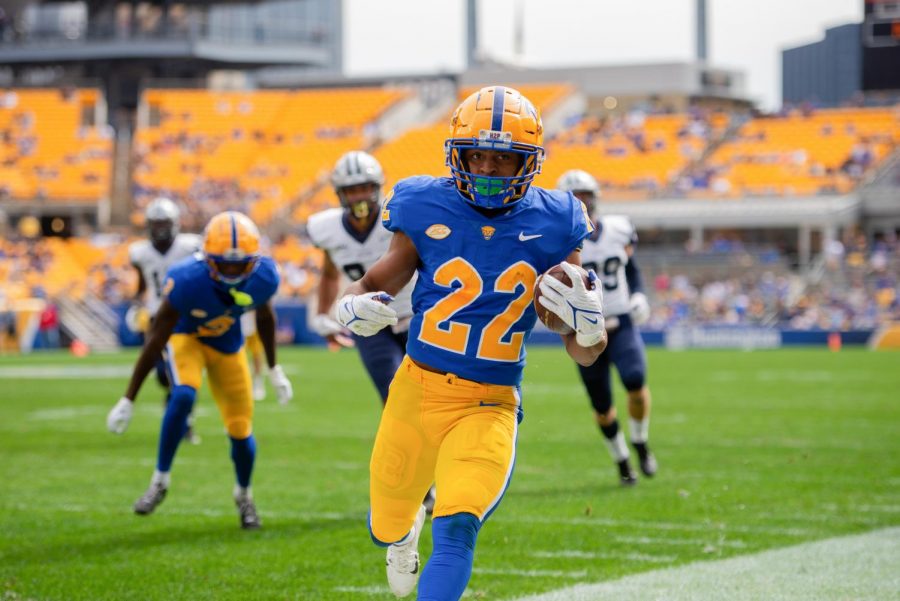 Running back Vincent Davis (22) carries the ball during the Pitt vs. New Hampshire football game on Sept. 25.

After a win, Pitt football head coach Pat Narduzzi typically enforces a “24-hour rule” to enjoy a victory before starting to prepare for the team’s next opponent.

But after the Saturday win over Virginia Tech, the next opponent to face the Panthers won’t be just another team, but the annual ACC powerhouse Clemson Tigers.

According to Narduzzi, redshirt senior quarterback Kenny Pickett wanted the team to start preparing for Clemson — just 12 hours after beating the Hokies. Pickett said Saturday that some believe the Tigers aren’t as threatening as they’ve been in the past decade, but to him they’re just as good as ever.

“They’re a heck of a team,” Pickett said. “I know everyone’s talking about them like they’re not Clemson. They’re still Clemson.”

The Clemson Tigers (4-2, 3-1 ACC) are typically one of the most feared teams in the entire country. But after the departure of a couple key offensive weapons, including NFL No. 1 overall draft pick quarterback Trevor Lawrence, the Tigers have found themselves in an unfamiliar position — outside of the AP top-25 for the first time since November 2014.

But Narduzzi doesn’t seem to care about what the media, oddsmakers or fans think about his program — he just wants his guys to execute come Saturday.

“I don’t care about favorites and points and spread and all the rest of it,” Narduzzi said. “Doesn’t really matter in my opinion … I just know they are a really good football team and we are going to have to play our best to have a chance to win.”

Here are the keys to the game and what will give Pitt the best “chance to win.”

In the Panthers’ loss to the Western Michigan Broncos, WMU burnt junior safety Erick Hallett II across the middle with slant routes on run-pass-options on more than one occasion. When the Panthers went down to Blacksburg last weekend for another offense that runs the RPO, some worried that Hallett would get exposed by the Hokies.

But in a game where the defense shined, Hallett was one of the stars of the game. The safety logged four tackles, two pass break ups and an interception against the Hokies — displaying much growth since the ugly loss to Western Michigan. The performance was worthy of the ACC naming him the conference’s defensive back of the week.

Clemson comes into town boasting a spread offense capable of running the RPO. Sophomore quarterback DJ Uiagalelei has not lived up to many fans’ expectations, but he’s shown flashes of excellence this season and is capable of burning offenses with his powerful arm. Narduzzi is well aware that while Uiagalelei may not have the most impressive stat line thus far, that doesn’t mean he can’t expose Pitt’s defense if it’s not ready.

“He’s got a gun,” Narduzzi said. “He’s got a quick release. He can run. We’re going to have to get him down when he does run the football. He can definitely test us down the field … They are going to run the RPOs as good as we’ve probably seen since Western Michigan.”

Hallett’s position at free safety is crucial in neutralizing the passing portion of the RPO offense. If the Panthers want to avoid another meltdown like Western Michigan, Hallett is going to have to continue his elevated play of the past few weeks.

“He just keeps getting better,” Narduzzi said. “It’s called development, and the more snaps you get, the more comfortable you get. And he’s just becoming really comfortable back there.”

Pitt has home-field advantage for the first time

Pitt has played Clemson three times in Narduzzi’s time at the helm, but this will be the first time the Panthers welcome the Tigers to Heinz Field. The Panthers met the Tigers in Death Valley twice and once in Charlotte for the ACC championship in 2018.

But once again, things are different this time around and Narduzzi is looking forward to playing the Tigers in front of a home crowd.

“I hope Panther Nation shows up, and we hope it’s loud for them,” Narduzzi said. “I ask the Panther faithful to come on out and get loud, and we need the home-field advantage … But it’s our house and we’ve got to play like it. And we’ve got to cheer like it. We’ve got to show up like it.”

Pitt’s athletic department has also branded the game the “Roc the Royal” game, imploring fans to unite in wearing the team’s royal blue colors. With demand for tickets high, many sections of the lower bowl have already sold out and the average ticket price for a non-student ticket is north of $100 on ticket website SeatGeek.

Pickett has vaulted the Panther offense into the country’s top tier with his performance thus far. And while the team’s performance is obviously a more important aspect of the program, this game could make or break Pickett’s case to be a Heisman trophy winner and first-round draft pick.

Pickett put up monster statlines early on this season. But, as critics were quick to point out, these teams weren’t ACC foes and were clearly less talented than Pitt. Since the Panthers started their ACC schedule, Pickett has silenced these critics and thrown for 592 yards and six touchdowns in two straight wins over respected defenses.

Sports Illustrated’s most recent NFL mock draft predicts Pickett will be the first player selected. The redshirt senior said one of the reasons he came back for another year was to play in big games. A big performance in a big game will certainly boost Pickett’s already exponential upward trend.

The Tigers may have two losses, but their defense has impressed all season long. While the Clemson offense ranks last in the ACC, the Tiger defense is ranked No. 1 and has been able to keep the Tigers within striking distance in each of its games this season. Narduzzi said he thinks Clemson’s defense will be a real test for his offense.

“We’re playing the best defense in the country in my opinion,” Narduzzi said. “I mean, maybe Georgia is right there. But this is a top-notch defense that we’ve got to be able to pick up all the pressures.”

Don’t expect a shootout at Heinz Field this weekend. Rather, look for a defensive chess match between Narduzzi and Clemson’s defensive coordinator, Brent Venables. If Pickett and the offense can get the Panthers two touchdowns, it may be enough to win the game.

The defense will look to bring a new level of energy this week because, according to redshirt sophomore Calijah Kancey, they’ve got some unfinished business to tend to.

“We’re going to play hard again,” Kancey said. “We’ve got some unfinished business with Clemson. They did some things to us [last year] that we want to make up for.”

The game will kickoff Saturday at 3:30 p.m. at Heinz Field and air on ESPN.