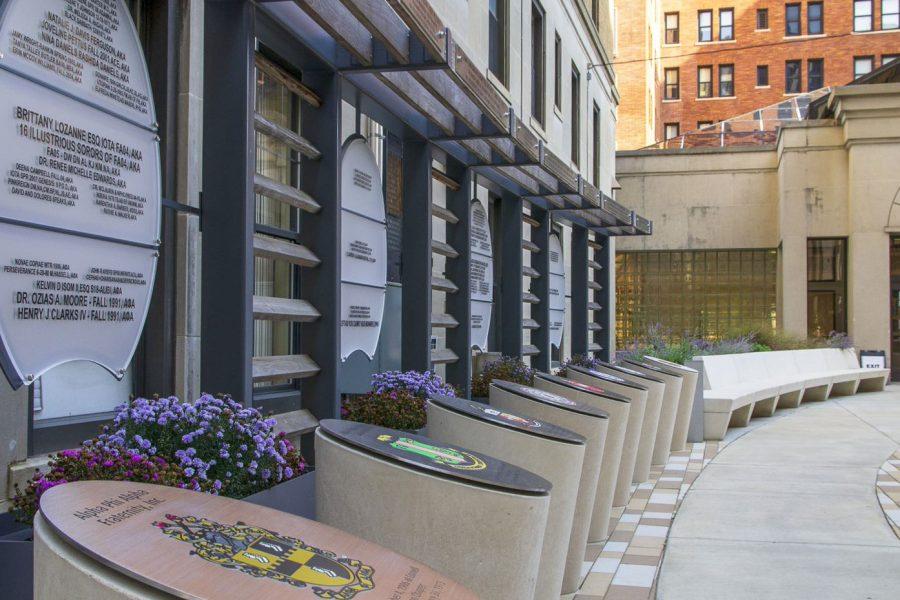 The monument in the Schenley Quadrangle celebrating nine historically Black Greek letter organizations that make up the National Panhellenic Council.

When Iniobong Etuk brought up the idea of creating a plot to honor the National Pan-Hellenic Council on campus in 2015, his fraternity brothers responded that others had tried, but “always hit roadblock after roadblock.” In the unrest following the 2016 election as well as nationwide protests following several police shootings, Etuk said he wouldn’t “take no for an answer.”

“Times were different before. We just happened to be in an era of time where we have more leverage,” Etuk said. “So to see that it actually came to fruition later in life is amazing.”

More than three years after Etuk graduated, Pitt installed the nearly 40-foot-long monument in the Schenley Quadrangle outside the William Pitt Union. This installation makes Pitt the first predominantly white institution in western Pennsylvania to build a plot celebrating the nine historically Black Greek life organizations that make up the NPHC.

Prior to the monument’s installation, Etuk said Pitt’s Black Greek life organizations “[didn’t] have anything on campus that show we even exist.”

“We don’t do these big rushes where we have tons and tons of members coming in, we don’t have frat houses with our fraternity and sorority names on the house, we don’t get to buy out a floor in the quad,” Etuk said. “So now it’s kind of like, you can’t ignore us. We’re here on campus.”

Etuk traveled from Miami, Florida, to attend the monument’s unveiling during Homecoming on Sept. 25, where more than 400 alumni, students and friends gathered around the monument. He said when Pitt unveiled the monument, he felt that the fraternities and sororities were finally being represented on campus.

Kenyon Bonner, vice provost for student affairs, worked with the NPHC to create the monument, and described its unveiling as a “blue, gold and Black moment.”

“This is a special moment in Pitt history,” Bonner, a member of Omega Psi Phi Fraternity, Inc., said. “Our commitment is to ensure — through the dedication of the NHPC plot — that the significance of our NPHC organizations and members never fades.”

Valerie Njie, Pitt Alumni Association president, said she hopes the monument will serve as a place where members of the NPHC can gather at future homecomings.

“I can see at homecomings in the future that we come back to the plot,” Njie, a Delta Sigma Theta Sorority, Inc. member, said. “This is our space, and we have more in common in this space than we do things that are different. We’re in competition, you know, everybody’s rushing, everybody’s trying to get folks, but when we come to the plot, this is a tribute to our sorority sisters and fraternity brothers.”

Njie said she also hopes the plot will remind people about the origins of the organizations — two of which will celebrate more than 100 years on Pitt’s campus this fall.

“Remember that history which you learned about these individuals, what led them at a time when Blacks were not permitted in white sororities and fraternities,” Njie said. “There was something courageous and bold about those individuals that decided, ‘We want to start a chapter here.’”

The monument comprises nine plinths, designed to represent each organization in order of the year they were founded. Above the plinths, there is space to honor the founders of the NPHC and the donors who helped raise $150,000 to create the monument. Njie, who contacted NPHC alumni to make donations for the plot, made a donation herself and even put her children’s names on the engraving.

Cameron Spooner, the current NPHC president and a senior finance major, also contacted alumni and encouraged them to donate to the plot. Spooner said the plots show the NPHC’s resilience and its presence on campus after COVID-19 caused Greek organizations to struggle with membership and engaging with new students.

“It’s just amazing to see the plots come to fruition and people to come back to campus and show that strong presence and show people that are just now coming onto campus that we’re here, that we’re going to stay here, and that we’re going to continue to have a strong impact on Pitt’s campus,” Spooner, a member of Alpha Phi Alpha Fraternity, Inc., said.

Sydney Grissom, vice president of the NPHC and a senior economics and political science major, said she thinks the monument is an “incredible first step” in recognizing the NPHC and encourages people to look further into what the NPHC has accomplished.

“The plots are an incredible show of what our organization is in the forefront, but I think that this isn’t the end-all, be-all for what we do on campus or what we’re capable of or how far we should go with recognizing our organization,” Grissom, a member of Delta Sigma Theta, said. “We just encourage the University and everybody in the community to continue to broaden your understanding of what our NPHC organizations are doing and just how impactful we’ve truly been.”

Etuk said now that the monument has been built, students should “live up to” what it represents.

“We were founded on service [and] trying to build up our communities and better our fellow man and our sister,” Etuk said. “We wanted these plots. We wanted something to showcase our importance and stuff like that. Okay, so then let’s live up to it, like let’s live up to why we deserve to have this here.”