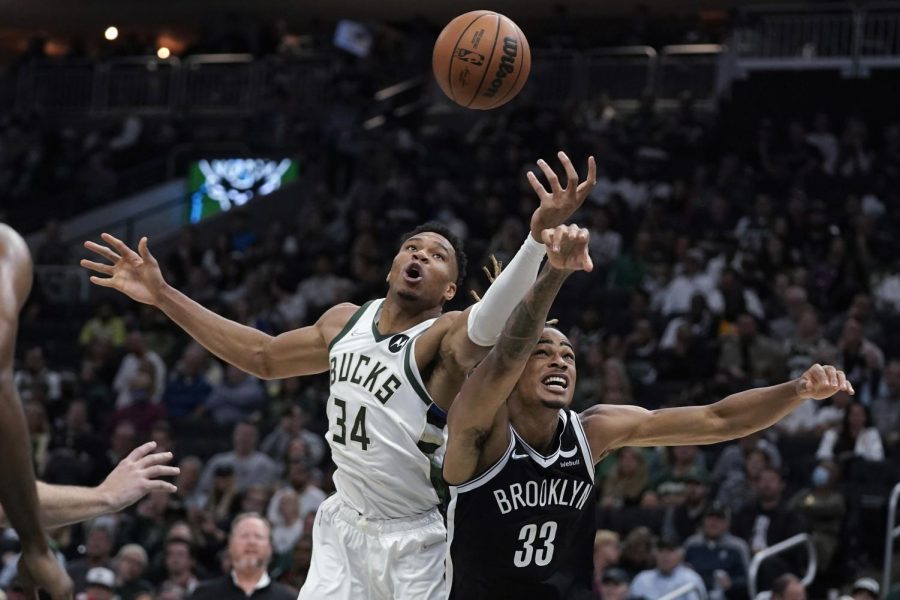 Milwaukee Bucks' Giannis Antetokounmpo (34) and Brooklyn Nets' Nicolas Claxton (33) reach for the ball at Fiserv Forum in Milwaukee on Tuesday.

In this week’s Take 5, The Pitt News sports desk takes a look at everything from the Ben Simmons saga in Philadelphia to discussing Mike Sullivan’s masterful strategizing and being one of the most underrated coaches in the NHL.

The Ben Simmons saga continues to rage on in Philadelphia // Jack Markowski, For The Pitt News

As the 2021-22 NBA season tipped off for the Philadelphia 76ers on Wednesday evening, their off-the-court stalemate with All-Star point guard Ben Simmons continued. The situation between him and the organization may have reached its boiling point, but it’s hard to blame the Sixers for their course of action up to this point.

Head coach Doc Rivers kicked Simmons out of practice on Tuesday for “conduct detrimental to the team” and subsequently suspended him for one game as he reportedly appeared disengaged at practice.

The suspension comes after an offseason filled with drama and speculation. It all seemed to start with Rivers’ comments on Simmons’ ability — or inability — to be a championship-level guard following the team’s early playoff exit. Simmons and his representation went on to request a trade and holdout until the final days of training camp.

From the outside looking in, there’s little evidence that would suggest Philadelphia has mishandled this situation. Simmons hasn’t developed his game to the level they were expecting when they drafted him No. 1 overall, which is a source of frustration.

He’s under contract for the next four seasons, so there should be no rush to trade him unless it’s for the right package. They don’t have an obligation to satisfy his requests and it certainly appears that they won’t be giving in any time soon.

When the start of the 2021-22 NHL season came around, the Pittsburgh Penguins were assumed to be doing damage control. Franchise cornerstones Sidney Crosby, Evgeni Malkin and Jake Guentzel were all out for the season-opening game in Tampa against the defending back-to-back Stanley Cup champion Lightning.

Penguins fans were prepared to be victims of a masterclass on national television at the hands of the best team in hockey. Instead, what they saw was a Penguins team composed of relative no-names dominate one of the most talented squads in recent NHL history thanks to head coach Mike Sullivan’s brilliance.

Perhaps the most incredible part of the Penguins’ 6-2 victory was the fact that each goal was scored by a different player — three of which were not on the roster at the conclusion of last season and one of those signed with the team less than 24 hours before puck drop.

Since the win, the Penguins are still yet to lose a game in regulation and are tied for most points of any NHL team — all without both Crosby and Malkin.

What makes Sullivan such a fantastic head coach is that he gets the very most out of his roster by putting players in positions to succeed. Sullivan’s line combinations seem to always help the players complement each other brilliantly — it can be seen in Jeff Carter’s late-career resurgence and Danton Heinen’s blazing start.

Sullivan has still never won the Jack Adams Award for the league’s best coach, but make no mistake — the Penguins are being led by one of the NHL’s elite minds.

Seven picks for Cowboys’ No. 7 // Brayden Tinney, For The Pitt News

Just when it looked like the Patriots would deliver the Cowboys their first loss in five weeks, Cowboys’ defensive back Trevon Diggs struck again, intercepting Patriots quarterback Mac Jones to put the game on ice.

The second-year cornerback was far from a rookie standout, but now sits behind just Browns defensive end Myles Garrett as the favorite to win NFL Defensive Player of the Year.

Diggs has recorded seven interceptions in six games, with at least one in each consecutive contest. Only three other players in NFL history — including former Cowboys coach Tom Landry — have recorded an interception in every game for the first six weeks in NFL history.

With the Cowboys on a bye in week seven, Diggs has the chance to break the NFL record against the Vikings on Halloween night.

Has Diggs given up big plays and gotten lucky with some of his interceptions? The quick answer is, yes. But he has only allowed an average passer rating of 38.9 with zero touchdowns. Adding on his explosive speed, his gambling style of play makes up for the occasional slip-up.

The biggest question looming is whether Diggs can keep this performance up. If he can pick off Vikings quarterback Kirk Cousins, he’ll stand alone in the record books and may even be the top candidate for Defensive Player of the Year.

The Washington Football Team announced last Thursday that they would be retiring former star safety Sean Taylor’s No. 21 at halftime of their Sunday bout with the Kansas City Chiefs. The number is now one of only three to ever be retired by the franchise and how they executed the ceremony was disgraceful.

The team gave their fans a laughably short four-day notice which can only be described as either a catastrophic failure from the PR team or a deliberate plan to take attention off the recent slew of controversy surrounding current and former personnel.

Both explanations are a dishonor to the brief but legendary career of Taylor, who was shot in his Florida home in 2007 and later died. He was only 24 years old and one of the league’s brightest stars in just his fourth season.

The way the team handled every aspect of the ceremony was disappointing. Apart from the planning failure, the ceremony itself was underwhelming and seemingly over before it began — a minimization of Taylor’s legacy.

All that matters is that Taylor’s family felt as though he was honored adequately — and it seems they were satisfied with the ceremony. With that being said, this is just one of countless instances illustrating the ineptness of team owner Dan Snyder, showing just how little he cares about the history of a once-storied franchise.

Antetokounmpo is the best player in the League // Will McGlynn, For The Pitt News

The Bucks came out on Wednesday and rolled their Eastern Conference rivals, the Brooklyn Nets, 127-104. Antetokounmpo played like an MVP putting up 32 points and 14 rebounds in the blowout and showcased his new jump shot. NBA fans everywhere have said that Antetokounmpo’s jump shot looks much more fluid and smooth, spelling trouble for the rest of the league.

NBA teams were always trying to force Antetokounmpo out of the paint, giving him plenty of room to shoot. But now, it looks like he can hit those jump shots. Antetokounmpo also developed a new free-throw routine — meaning no more violations. With that routine, he was seven-for-nine from the line against the Nets.

He’s playing like an MVP and with his work ethic, Antetokounmpo is poised to wreak havoc on the league for a long time. No other player has his combination of speed, size, defensive IQ, ferocity and skill. Shaquille O’Neal put it best when discussing Antetokounmpo’s game.

“I’ve never given my name up before, but I’m giving it to him. He’s the new Superman,” O’Neal said.