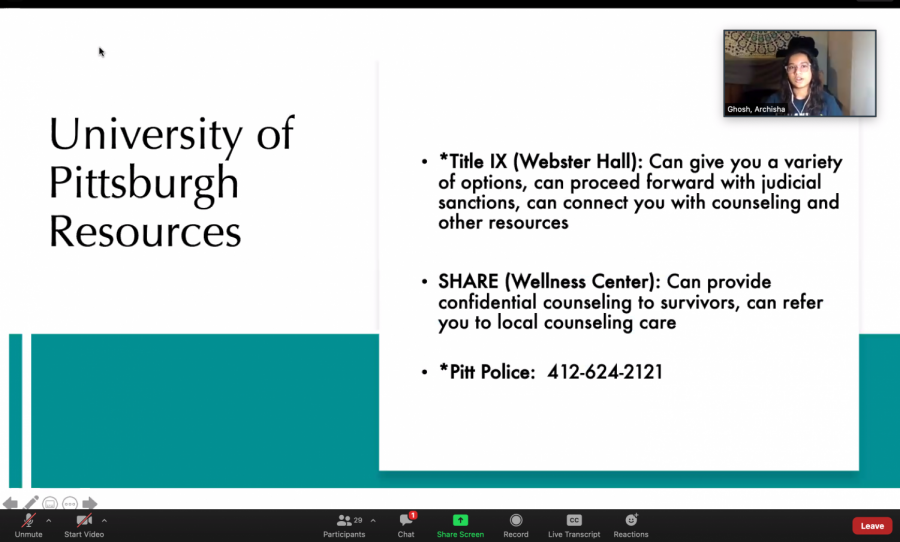 Abigail Gorman said sexual violence can happen to “anyone,” and no matter the situation, it is not the survivor’s fault.

Sexual Assault Facilitation and Education — a group of trained peer educators who discuss topics such as relationship violence, sexual violence, interpersonal communication and consent with Pitt student organizations — led a Zoom workshop Wednesday night to talk about how to support survivors of sexual violence. Pitt held this workshop as a part of its recognition of Relationship Violence Awareness Month, which is in October.

Gorman, a SAFE peer educator, said sexual violence “occurs when someone forces or manipulates someone else into unwanted sexual activity without their consent.”

Archisha Ghosh, a junior molecular biology major, said there are many resources for survivors of sexual misconduct, such as the Title IX office located in Webster Hall, which gives a “variety of options” to survivors, such as counseling resources, academic accommodations and judicial sanctions for perpetrators.

She said Title IX offers the option to report anonymously online, call 800-468-5768 or text 412-903-3456 to report a concern. Ghosh also said the Office of Sexual Harassment and Assault Response and Education offers “confidential counseling” to survivors of sexual violence. Calling Pitt police at 412-624-2121 is also an option for survivors to make a report, according to Ghosh.

“Something to remember is that Title IX and the Pitt police are not confidential resources,” Ghosh, a SAFE peer educator, said. “That means if something has happened, they may be mandated reporters. But these are the main resources at the University of Pittsburgh to keep in mind.”

Ghosh also said it’s important to be “non-judgemental and supportive” when a survivor talks about their experiences.

“Remember the survivor is telling you because they see you as a safe and trustworthy person,” Ghosh said. “How you react to their disclosure can have a significant impact on how they make sense of what’s happened to them, and it could affect what they do or not do next.”

Gorman cited the 2019 AAU Campus Climate Survey, a report examining the current state of sexual assault and misconduct on 33 university campuses, including Pitt. According to the report, 59.8% of non-heterosexual identifying students and 46.3% of Black students reported experiencing sexual harrassment. It also said 26.9% of female undergraduate students reported experiencing “non-consensual sexual contact,” and 26% of students with disabilities reported “penetration or sexual touching involving force or inability to consent.”

“These [statistics] aren’t meant to scare you, it’s just the reality of what sexual violence looks like at Pitt,” Gorman said.

For Adarsh Mallepally, a senior biomedical engineering major, these statistics are not shocking for a college campus.

“I unfortunately don’t find this surprising because I understand the prevalence of rape culture that exists on college campuses,” Mallepally — president of Mastana, Pitt’s co-ed Bollywood fusion dance team — said.

Gorman said to “gently encourage” survivors to get support, but not “push it.” She said a survivor shouldn’t be pushed to do “anything they don’t want to do.” If it’s something they want, Gorman said to “provide resources” and help them through the processes of reporting.

She also said it’s important to seek support for yourself.

“It can be really hard, actually, to be someone’s support when they’re going through such a traumatic experience, and it’s okay to take care of yourself in that time,” Gorman said. “Sometimes it’s better, and you’ll be a better support to them if you’re taking care of yourself.”

Gorman said it’s often “overwhelming” for survivors, and survivors often feel alone in the aftermath of their experiences. She said “little acts” of support — such as listening to survivors — help make a difference.

“I think a lot of times for survivors it’s very overwhelming. It feels like there’s nobody in your corner. You feel very alone, very isolated. That’s a very common reaction,” Gorman said. “So, little things — just little acts of support, little acts of just listening and believing really go a long way.”