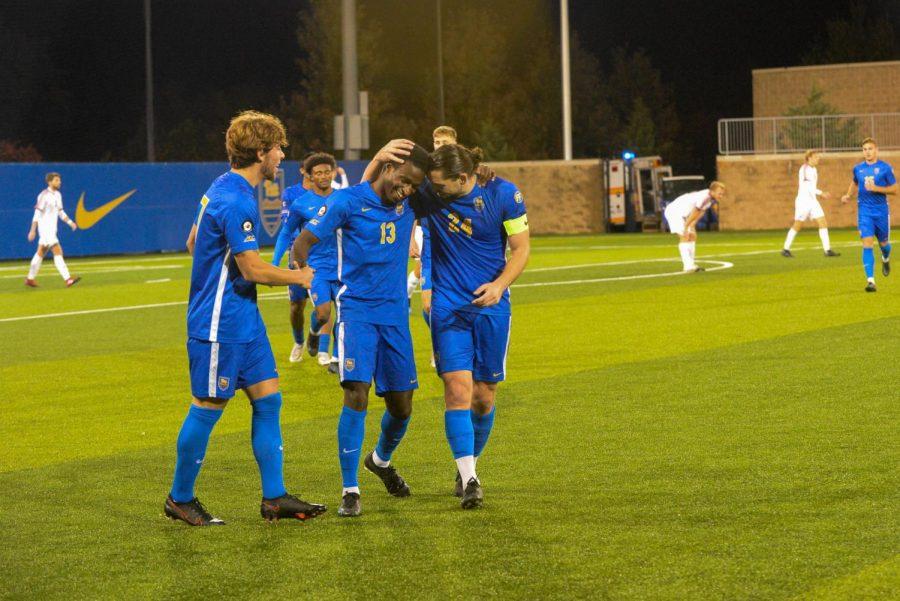 By Christopher Cornejo, For The Pitt News

Following a 3-2 comeback win against Duke at home on Monday night, No. 10 Pitt men’s soccer (9-4-1 overall, 4-2-1 ACC) continued its home dominance against the University of Massachusetts (8-4-4 overall, 2-2-3 Atlantic 10), beating the Minutemen 5-1 in front of crowded stands at Ambrose Urbanic Field.

The Panthers dominated from the opening whistle. They controlled possession and mounted pressure in UMass’ own back third — making life difficult for their defenders. This high pressure proved fruitful for Pitt, as its first goal came within five minutes after the start of the game.

Pitt’s dominance continued in the first half. Confident build-up play from the defense gave way to quick counterattacks, shots on goal and passes into the UMass box for the Panthers.

Despite their solid play on defense, UMass intercepted several passes deep in Pitt’s territory. The Minutemen forwards made life more difficult for the Pitt defense thanks to high-pressure tactics.

The Panthers continued their attacking barrage on the UMass defense throughout the opening of the first half, but the Minutemen recovered quickly and generated a counterattack. UMass graduate student attacking midfielder Yosuke Hanya sprinted inside of Pitt’s box, where a quick move to turn the ball inside opened the opportunity to blast a powerful shot. It rocketed past Panther graduate student goalkeeper Nico Campuzano, tying the game in the 23rd minute.

The remaining minutes of the first half proved to be just as physical and fast paced. Pitt continued its strong wing play — dumping balls into the UMass box and ending the half with nine shots, five of which landed on target. Both teams combined for 12 shots in the first half, but only two found the back of the net. The two teams ended the first half tied 1-1.

After the game, Pitt head coach Jay Vidovich reflected on the first half.

“We were settling for services from too far out,” Vidovich said. “We were playing into the box and the goalkeeper made some great saves and they had some great blocks, so we wanted to get in better spots on the field.”

The conceded goal in the first half proved to be an annoyance for Vidovich. He needed the team to adjust in the second half.

“They exposed us on that one counterattack, so we wanted to make sure we balanced off the field better,” Vidovich said.

The second half began similarly to the first for the Panthers, who applied pressure deep into UMass territory. Frequent substitutions and player rotations were a key strategy for the Panthers, even though they didn’t employ it by choice.

“Partially we were forced to sub, whether for cards, injuries or fatigue factors,” Vidovich said. “We’re trying our best to keep guys fresh for when we play Virginia Tech.”

But this system paid off for the Panthers, who scored their second goal early in the second half. Löeffelsend pushed through the opponent’s midfield. Receiving passes from Bertin Jacquesson and Almeida, Löeffelsend snuck just outside of UMass’ box, where he launched a powerful, low-driven shot past the Minutemen goalkeeper into the bottom left corner of the goal — making it 2-1 to the Panthers.

After this, UMass provided some offensive pushback, but the solid Pitt defensive line continued to swallow and redistribute enemy balls back into its own final third.

The floodgates for Pitt finally opened up completely in the 67th minute when Löeffelsend again occupied enough open space inside the box to control an offensive block. After corralling a rebound, he sent a thunderous half volley flying past the goalkeeper to make the score 3-1, Pitt.

Pitt won a corner kick in the 72nd minute and Feitosa launched a well placed ball into the box. Senior defender Arturo Ordonez corralled the pass and let loose a resounding header, sending the ball past the UMass goalkeeper to secure a three-goal lead with just under 20 minutes left in the game.

Graduate student substitute Alexander Dexter received a ball on the wing five minutes later just outside of the UMass half from Almeida. Dexter utilized the open space given to him by UMass defenders to blast a rocket to the top left corner of the goal, which the keeper couldn’t save.

Pitt continued its possession domination for the rest of the game. UMass forwards were unable to create any threats in the Panthers’ final third. The match ended in a comfortable 5-1 win for Pitt.

After this dominant performance, the Panthers will rest and prepare to host No. 4 Virginia Tech at home on Friday at 7 p.m. The match against the Hokies will air on ACC Network Extra.