‘Women In’ orgs work to empower women in male-dominated fields 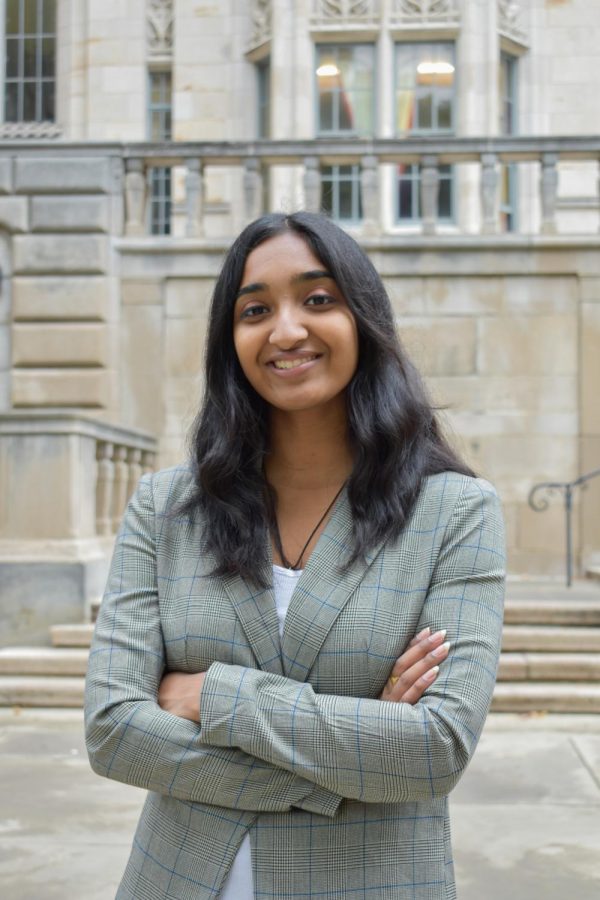 Shreya Babu, a junior sociology and administrative justice major, is the president and founder of Women in Law at Pitt.

Shreya Babu said it can be discouraging to pursue a career as a lawyer, due to the field’s reputation as a “boy’s club.”

“I’ve never not wanted to be a lawyer. I decided I was going to be a lawyer when I was eight and I’ve never changed my mind,” Babu, a junior sociology and administrative justice major, said. “But even for me who decided that 12 years ago, it’s a very intimidating thing, and it worries me if I can’t do it.”

The various “Women In” student organizations at Pitt aim to support and encourage women in male-dominated fields through learning opportunities, guest speakers and mentorships. These organizations include Women in Law, Women in Healthcare, Women in Computer Science, Women in Economics, Women in Business and Women in Surgery Empowerment.

Babu, president and founder of Women in Law, said there aren’t enough opportunities for women interested in the legal field and this negatively impacts their willingness and confidence in entering the field.

“[It’s not that there’s] less women who want to go into law … but it’s more of the fact that there’s less confidence in our abilities, and less push to help us become lawyers and move forward in that field,” Babu said.

Babu said Women in Law provides resources and opportunities to students of all backgrounds and career goals who have some interest in the legal field. She added that women, non-binary individuals and people of all gender identities and sexual orientations are welcome to join the organization.

Women in Law general body meetings, which are every Wednesday at 9 p.m. at varying locations around campus, often include presentations and discussions on certain legal issues, such as inequality women face in the workforce, the Texas abortion ban and medical law. The organization also hosts various speaker presentations for students to engage with women in the legal field. Some of their upcoming events include presentations from Michelle Yingling, a pre-law adviser at Pitt, about law school applications and Pitt law professor Deborah Brake about gender-based legal issues.

The organization works in partnership with the Pitt Law Women’s Association and hosts various events with them, including a discussion about specialities within law last week. Women in Law also has a mentorship opportunity for undergraduate students through this partnership, which pairs students in the organization with first- and second-year Pitt law students.

Women in Computer Science also provides women interested in the field with various opportunities to pursue their interests. Sushruti Bansod, the organization’s marketing director and a senior computer science major, said WiCS provides a community for women in tech through industry experience, networking and social events along with outreach and advocacy events. WiCS also hosts “spill the tea” time where they discuss course requirements and recommendations for those majoring in the School of Computing and Information.

“We are a group of powerful women in tech and we hope to create a safe and supportive environment for students in the school of computing and information,” Bansod said. “The goal of Women in Computer Science is to foster diversity and inclusion in the field of computing.”

The club holds general body meetings every Tuesday at 8 p.m. in 5317 Sennott Square. Many of their events are hosted with their sponsors, PNC, BNY Mellon and Argo AI.

Bansod said computer science has primarily been a male-dominated field for decades, but recently there has been change in the industry toward creating a “more inclusive and diverse environment.”

“This brings many ideas and all kinds of innovation that has not previously been seen in computer science, and helps to inspire other talented people to join a field previously seen as too nuanced and difficult to learn for the average person,” Bansod said.

Another organization that hopes to support women is Women in Healthcare. Erica Huynh, vice president and junior psychology major, said the club’s goal is to empower women interested in healthcare and also talk about important issues within the field.

“Something I think is super special about our club is that we talk about topics that aren’t normally talked about, like mental health stigma, body image issues, birth control or reproductive rights,” Huynh said.

Huynh said it’s especially important to support women in the field of healthcare given that they can provide different perspectives.

“I feel like a lot more people are comfortable having women, physicians for whatever reasons that may be for that person specifically, but I think it’s just really important … to have all these different perspectives in a field like healthcare,” Huynh said.

According to Huynh, Women in Healthcare held many activities and opportunities in prior years such as suture clinics for pre-med undergrads and fundraising events, as well as mentorship opportunities for the various healthcare fields like pre-Physician’s Assistant, pre-Physical Therapy, pre-medicine, pre-dental and more.

Women in Economics also aims to support women by creating an informal community for students interested in the field of economics, according to Alex Lancelotta, vice president and junior economics major.
“Because it’s such a male-dominated field, we really want to create a community where we can all just talk to one another,” Lancelotta said. “We really just want to create a really positive community for the women within the economics program.”

Women in Economics provides opportunities for members to plan academics, engage with women economists, attend study sessions and learn about internships. Lancelotta said they even had a guest speaker earlier this semester from the U.S. Department of Commerce. She also said along with hosting various events centered around economics, they also have socials to create a sense of community within the organization.

“We also mixed those events with more social events to try and get to know one another, because there are so few women … on a more personal level than you would in another club where there’s a lot of people,” Lancelotta said.

Babu said although there’s many more women in law school and women lawyers these days, there is still underrepresentation when it comes to higher leadership positions in the legal field, which needs to change. She said women deserve to feel confident in themselves and know that they can be a partner at a top law firm.

“It’s one thing to encourage women to get into a certain field, and to help them feel confident that they can do a certain job,” Babu said. “But it’s another thing to empower each other to feel like we deserve to be in that position in the field where we’re making decisions, and we’re in charge, and have the ability to really be in a position of power and authority too.”

Babu said universities need to provide more opportunities that guide, support and encourage women in their careers, especially in such intimidating and “scary” fields like law. She said clubs like Women in Law aim to highlight this need for equal opportunities.

Lancelotta said it’s important that women enter a field they’re passionate about, whether it’s STEM, economics, business or any other, no matter who “dominates the arena.”

“Women should not be afraid to go into a male-dominated field,” Lancelotta said. “I know that that’s something that people express and are concerned about, but you really just have to find your passion and anything even if it isn’t economics.”