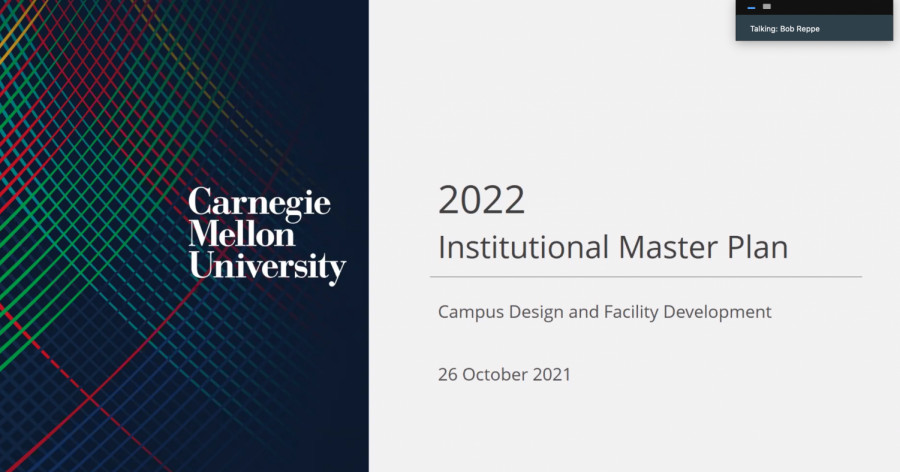 Carnegie Mellon University officials presented long-term campus development proposals on Tuesday to community members at an Oakland Planning and Development Corp. meeting, laying out the ways its Institutional Master Plan would improve academic and social opportunities at the university.

“Everything from our design components that focus on building buildings that are timeless, working on our campus open spaces, creating memorable campus experiences and integrating campus connections are all super important,” Bob Reppe, senior director of planning and design, said. “We want to make sure we also have a master plan that is flexible and can respond to what the next big things are.”

Reppe began the presentation with a descriptive explanation of each proposed change or addition within the IMP, created by the campus design and facility development department at CMU.

Proposed changes in the IMP include the addition of more student housing spaces and academic buildings. According to Reppe, the changes are outlined in three sections, each representing a campus district. These sections include the historic core, the area between Forbes Avenue and Schenley Plaza; North campus, the area between Fifth and Forbes avenues; and the Craig Street district.

Jennifer Beck, project manager for campus design and facility development at CMU, discussed the environmental and sustainability goals outlined in the master plan. She said a new initiative the planning team is focusing on is improving communication with students and the general public about how CMU’s new development projects contribute to or take away from university sustainability goals.

Beck said it’s important to think about the university as a system when considering practices being used to promote environmental sustainability.

“If we tear down one building, and build up another, are we using more energy or less energy, or more water?” Beck said. “We are going to create a platform where the public can go on and see how the campus is doing as a system.”

Another aspect of sustainable development is tree canopy, according to Beck. She said the 2022 IMP outlines how CMU is committed to replacing 100% or more of trees that are removed during development processes.

“If we have to take out 100 inches of caliper of a tree for a development project, we will put back 110 inches,” Beck said. “If we couldn’t do that on the site where the actual development is occurring, we are crafting a plan right now to help us understand what locations on the campus would be appropriate to put the trees back.”

“Inch by inch replacement is good,” Isler said. “But since it is the older trees that work hard for our environment, will you have as a priority saving old trees where possible?”

Beck said developers will prioritize older trees, and try to only take down trees because of disease or to further development projects.

“Our heritage trees and protecting those is something we are committed to and our master gardeners who are a part of our facilities management group are also committed to,” Beck said.

Planning energy usage is another main factor contributing to CMU’s sustainability goals, according to Beck. CMU began tracking its energy usage in 2005 and each year it reduced the amount of energy used. Beck said the use of energy planning allowed CMU to do this while simultaneously increasing its student population and campus square footage.

“The facilities management group, campus design and our design and engineering teams are working together to reduce energy, find cleaner sources of energy, create redundancy and have a better approach to how our systems are developed and implemented,” Beck said.

Beck ended the presentation by discussing how the master plan includes neighborhood enhancement initiatives. She said a way to better engage with the surrounding neighborhoods is through improving campus communication about development projects and events.

“We could think about developing a monthly newsletter that goes out to all of our neighbors that talks about development projects, but also opportunities for community members on our campus,” Beck said. “Whether it’s an arts event, a road that’s going to close for an event, move in or fireworks, we need to do a stronger job of communicating those things and giving community members an avenue to be able to reach out to someone when they have a question.”

Beck said a lot of CMU’s development projects are not meant to benefit just the campus community, but the neighbors as well. There are many amenities around campus that can benefit community members, such as bike lanes through campus that lead to Schenley Park as opposed to riding on public City streets, according to Beck.

“We think these amenities are all open to everyone and doing a better job of communicating that to the community is an important component moving forward from this master plan that maybe we haven’t done a good job of previously,” Beck said.