Takeaways | Panthers still in position to have a historic season 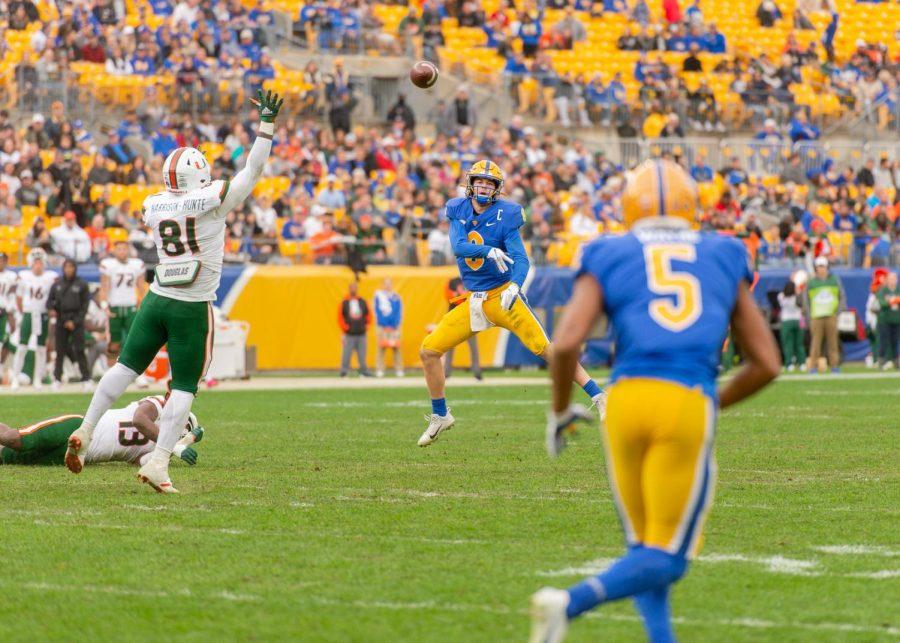 Any hopes of a trip to the College Football Playoff or redshirt senior quarterback Kenny Pickett hoisting the Heisman trophy evaporated when Pickett’s late fourth quarter pass sailed into the Miami defense’s arms.

One of the best parts about being a fan is it gives you that euphoric delusion that your team is better than every team in the nation. When that perception of reality is stripped away, the reality may hurt.

A striking and disappointing reality struck Pitt fans Saturday when the Hurricanes took down the Panthers — this team is not, and never was, a team destined for the College Football Playoff. What Panther fans need to realize is, that’s okay.

At the beginning of the season, if you told Panther fans that they’d be 6-2 and have a win over Clemson, they’d be happy with it. The important thing to remember is, the Panthers still have a very good chance to make history.

Pitt still has a 42.5% chance to win its first ACC Championship, according to ESPN’s Football Power Index. Winning a conference championship may not be the crown jewel that fans want, but it’s a step in the right direction for a program on the upswing.

Here are some observations and takeaways going forward with the Panthers.

Pickett’s chances at making his way to Manhattan for the Heisman ceremony took a big hit when the clock hit double zeroes yesterday. Fans have rallied around the phrase “Kenny Heisman” for weeks now, but this trend may come to a screeching halt after the loss.

Heisman voters have a pattern of voting for players with a near perfect team record. Since 2000, only five players have won the Heisman while playing for a team with two or more losses. While Pickett continues to put up numbers as good as anyone in the country, it will be difficult to overcome the fact that he lost two games as a favorite at home.

Whether the losses are his fault or not is another issue. But the voting committee will look at Pitt’s record and see two upset losses and hold that against him.

Meanwhile, Alabama sophomore quarterback Bryce Young continues to dominate in the SEC — against objectively tougher competition. Alabama has one loss but it’s one that the committee may overlook given it was on the road and against a conference opponent.

The defense is vulnerable against competent quarterbacks

Head coach Pat Narduzzi’s defensive scheme is pretty consistent from week to week — bring pressure and force the quarterback to make decisions quickly. This works against quarterbacks who don’t have good pocket awareness and can’t make throws in the pocket. But when the defense has matched up against pure passers, they’ve been exposed.

Eleby provided a blueprint for how to expose the Panthers. Miami followed suit and ran a very similar offense to WMU’s.

First-year quarterback Tyler Van Dyke didn’t need too much time to throw, simply checking the ball down in the flats or hitting guys in gaps in the Panthers’ zone defense.

Narduzzi has been able to exacerbate inexperienced and less versatile quarterbacks with his defense. Pitt lost both games when playing competent quarterbacks. Pitt has a few more very talented quarterbacks on its schedule in UNC junior Sam Howell and University of Virginia junior Brennan Armstrong — two ACC matchups.

If Pitt does want to make a run at the ACC Championship, Narduzzi is going to have to adjust to playing pure passers.

One bright spot from the Miami game is the special teams units’ performance. For the first quarter of the season, the punt and kick returns were dreadful and the punts from senior punter Kirk Christodoulou were underwhelming.

But it seemed they turned the corner the last couple of weeks and looked especially good this weekend.

Punt coverage has also been much better the past few weeks. Christodoulou’s punts have been hanging in the air long enough to allow the punt coverage unit to force the returner to call for a fair catch or corral the punt.

The Panthers will look to bounce back next weekend on the road against the Duke Blue Devils. The game will kick off at noon and air on ACC Network.