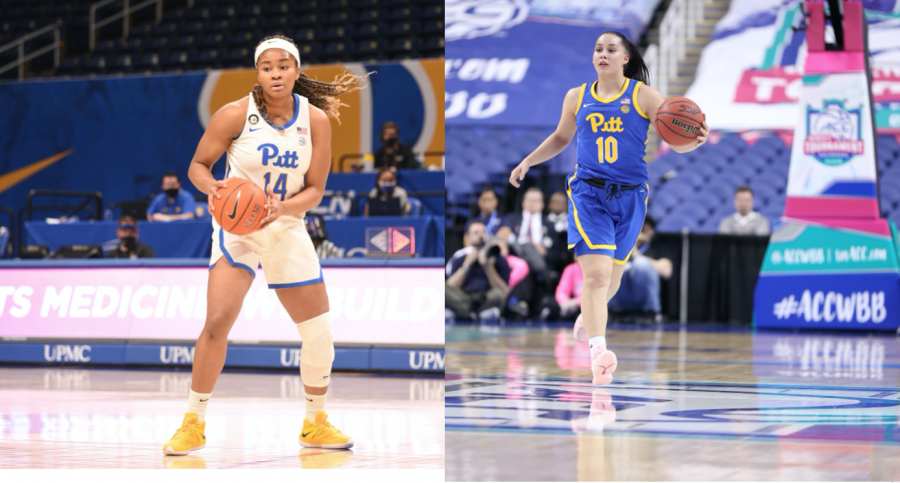 Greece gave the world a lot of things — several words in the English lexicon are of Greek origin, and who could forget the gyros.

Ezeja and Prapa both played for the basketball team at Panathinaikos AC Athens, a Greek athletic club with multiple sports — in fact, one of the reasons Ezeja came to Pitt was because Prapa was already there.

“Knowing somebody you played with makes your experience easier,” Ezeja said. “And she helped me my freshman year with all the plays and the language and the coaches, she really helped.”

Prapa had a different path to Pittsburgh, as previous head coach Suzie McConnell-Serio recruited her.

“I wasn’t recruited by the coaches that are here now,” Prapa said. “I liked that staff, but also the academics and everything I saw here. I especially liked playing in the ACC, definitely.”

Prapa did not play last season due to a knee injury, but Ezeja logged significant minutes as a backup forward behind junior center Rita Igbokwe. Across 17 games, including four starts, she averaged 2.9 points and 5.9 rebounds per contest. During her transition from Greek to American style basketball, Ezeja realized that the American style of basketball is less methodical and more physical than in Greece.

“It’s definitely a different experience the way they play basketball in Europe and here [in the States],” Ezeja said. “This is a faster game over here, more physical. In Greece, there were more systems and plays.”

And while Pitt has recruited Ezeja and Prapa from Greece, the school has also recruited players from many other countries in the past, including Canada, the Netherlands and Brazil. Associate head coach Terri Mitchell explained that specific countries aren’t as important in the grand scheme of recruiting.

“At the end of the day, we’re just trying to find the best possible fit for the program,” Mitchell said. “The bonus of being from another country is the international play that they’re used to. They start young, and they come in with experience.”

Even though Mitchell claims recruiting is all about what players can bring to Pitt, the fact that two players from Greece are playing at a high college level is distinctive, due to there being a relatively small number of Greek players throughout American pro basketball.

The WNBA has only ever had three Greek basketball players play in the league, with the most recent player Zoi Dimitrakou signing with the Washington Mystics in 2016. The other two players were Evanthia Maltsi, as well as Jaqueline Gemelos, who is currently an assistant coach for the New York Liberty.

Some of the most well-known basketball players coming from Greece are Giannis Antetokounmpo and two of his brothers, Kostas and Thanasis. Giannis Antetokounmpo, a two-time MVP and one-time NBA-champion, is regularly touted as one of the best players the NBA has to offer and the most notable name in a relatively small group of former and current Greeks in the league.

Prapa talked about how the Antetokounmpo family story inspires her as a Greek basketball player.

“We know so much about them, like how they grew up,” Prapa said. “They worked hard and we really look up to them.”

Ezeja recalled connections between her family and the Antetokounmpo family.

“With Giannis, I remember when I was younger our families kind of knew each other,” Ezeja said.

The Panthers have struggled under the White regime, going 21-60 and 6-43 in the ACC. Both the Blue Ribbon Panel and the head coaches projected Pitt to finish 14th this season in the 15-team ACC, just above Virginia in both polls.

Mitchell knows that every player will have to bring their A-game this season. She explained what Prapa and Ezeja can bring to this Panthers squad.

“Ismini is smart, she understands the game and it’s like having an extra coach on the floor,” Mitchell said. “And with Cynthia, she is a physical post presence and she’s not afraid of contact. One of the best rebounders the staff has been around.”

Prapa is still nursing the knee injury that kept her sidelined last season, but the senior claims she can lend a helping hand.

“I’m still injured, so I don’t know what I’m going to do yet [physically],” Prapa said. “But I still bring my knowledge I have from being here for four years … I know what the coach wants, so I’ll try to be a voice.”

As for Ezeja, she too nursed an injury in the offseason. But she believes she can still make an impact on the floor.

“I can rebound,” she said. “I’m not satisfied with my stats, so I’m working on trying to score more, but I can definitely get rebounds.”

Mitchell claimed Ezeja was one of the best offensive rebounders in the nation, and while she placed 22nd in the ACC in rebounds per game last season, her 2.8 offensive boards per game were No. 6 in the conference.

The coaching staff has been impressed with how the two Greeks have adjusted at Pitt so far. With international recruiting becoming more and more popular in college basketball, Mitchell said the Panthers will keep Greece in mind as a place to scout players in the future, should the opportunity arise.

“Recruiting is about connection,” Mitchell said. “And if we see something we like, from someone we trust, we would not hesitate to pursue those recruits.”