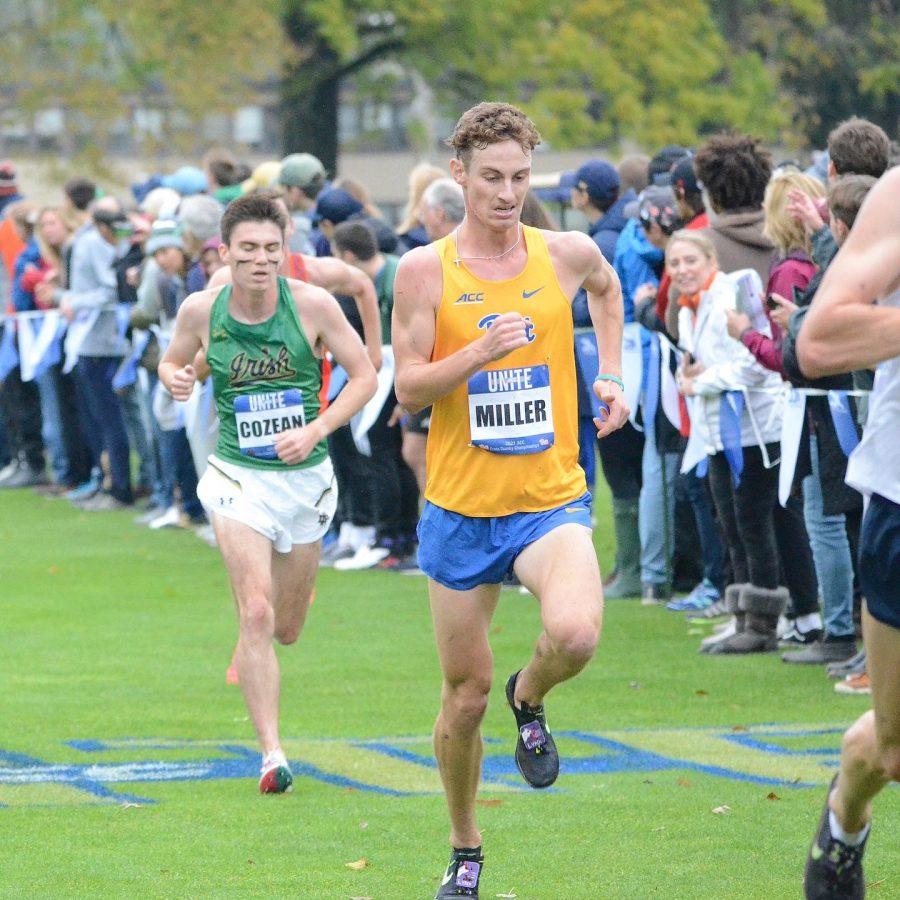 By Chris Cornejo, for The Pitt News

South Bend, Indiana, was the site of the ACC Championships, where Pitt men’s and women’s cross country competed this past Friday. Senior Evan Addison and first-year Caroline Rusinski finished highest for Pitt in the men’s 8k and women’s 6k, respectively.

The Panther men placed 11 out of 15 teams. They finished seven points behind Louisville and 42 points ahead of Georgia Tech with a team score of 299. Notre Dame won the overall men’s division, finishing with 32 points and Syracuse followed with 84 points.

The Panther women placed 12 of 15 teams with a total score of 373, in front of Louisville and just behind Wake Forest. Pitt earned its highest finish at the ACC’s since 2017 and a two-spot improvement in the standings compared to last season. NC State won the overall men’s division, posting a total score of 20. This marks the Wolfpack’s sixth straight ACC championship.

Senior Evan Addison finished the highest for the Panther men. He posted a season-high 8k time of 24:42:9, placing 52nd overall out of 135 runners. Sophomore Jack Miller placed closely behind at 57th overall, finishing with a time of 24:45:8. Graduate student Josh Higgins followed them up in 66th place, with a personal-best time of 24:51:9.

Sophomore Luke Henseler also performed well for the Panthers. He finished 71st, with a time of 24:55:9. His fellow sophomore classmate Sam Otis crossed the ending mark shortly behind in 79th, finishing with a time of 25:05:3. Other notable mentions include sophomore Ethan Maher and redshirt junior Tyler Rollins, who placed 97th and 98th, respectively.

First-year Caroline Rusinski finished highest for the Pitt women. She placed 79 out of 138 runners, with a time of 22:03:01, a new personal record. Sophomore Emily Brown followed up in 82nd, with a time of 22:11:2 and first-year Emily Jobes came right behind them. She posted an 85th place finish and a time of 22:16:8.

In addition, sophomore Sadie Carey-Tharp finished in 93rd, with a new 6K personal record time of 22:21:6. Fellow sophomore Olivia Zambrio crossed the finish line in 102nd place, with a time of 22:40:1.

First-year Winnie Incorvaia made the first ACC Championship appearance of her career and finished in 125th place, while junior Mary Borkoski finished in 131st.

Assistant coach Brad Herbster described his thoughts on the races, and what they need to improve going forward.

“The men set themselves up well early with Jack Miller leading the way,” Herbster said. “As the race unfolded, we looked alright at 6K but unfortunately the points we gave up in the last kilometer played a big role in our overall placement.”

In regards to the women’s race, Herbster praised the team’s performance and was optimistic that this past weekend was a step in the right direction for Pitt’s young runners.

“The women packed up really well and competed late in the race to beat teams who have shown good consistency throughout the year,” Herbster said. “We have a lot of work to do to be where we need to be in races of this caliber but a good step with such a young group.”

The Panthers will get much-needed rest before going to compete at the NCAA Mid-Atlantic Regionals, hosted by Lehigh in Bethlehem, Pennsylvania, on Nov. 12.