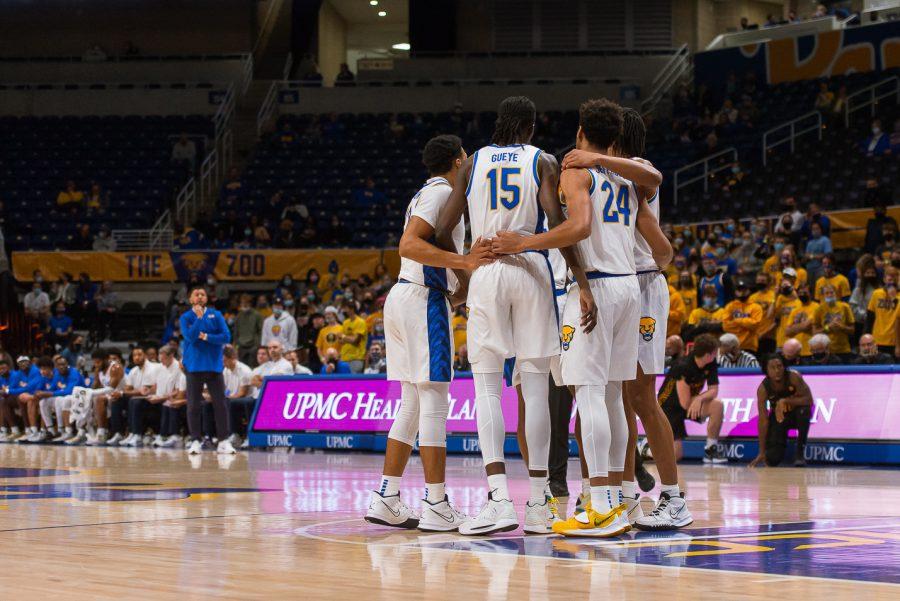 By Jermaine Sykes, For The Pitt News

Pitt men’s basketball head coach Jeff Capel will have a big task ahead of him in his fourth season at the helm. The Panthers began the season 8-2 in 2020, but ended the season by losing 10 out of their final 12 games, finishing with a 10-12 record and a 6-10 mark in ACC play.

This season, roster turnover has left expectations low. ACC media picked the Panthers to finish 14th in the ACC, and they have just a .5% chance of winning the ACC.

Former sophomore forward Justin Champagnie was the biggest loss for Pitt this offseason. Champagnie led the Panthers in points, blocks and rebounds per game during the 2020 season and declared for the NBA Draft in May. He signed as an undrafted free agent with the Toronto Raptors.

Other key departures include guards Xavier Johnson, Au’Diese Toney, Gerald Drumgoole Jr. and forwards Abdoul Karim Coulibaly and Terrell Brown, who all entered the transfer portal. The loss of Champagnie, Johnson and Toney means that Pitt will have to replace its top three scorers from last season.

The losses of Johnson and Toney raised a lot of questions about the health of Capel’s program. The guards left the Panthers midseason following a major losing streak, but Capel was undeterred publicly.

“Long term, I don’t see any effects, to be honest with you,” Capel said following the exodus last season.

Pitt added depth at guard by signing former Texas Tech guard Jamarius Burton, a 6-foot-4 senior guard with NCAA tournament experience who could potentially serve as a captain for this young Pitt roster. Players have only been on campus since the end of June, but Burton has already begun making a name for himself. Capel applauded Burton’s commitment to establishing a winning culture.

“[Burton]’s done a good job since he’s been here,” Capel said. “He’s been 10 toes down, both feet in … He’s tried to figure out how he can best impact us for winning.”

“Having Jamarius [Burton] around is a great thing, him just being that vocal leader,” Hugley said. “For me, when he first came, I had never played with a teammate like him.”

Stony Brook transfer Mouhamadou Gueye had an exceptional senior season in 2020-21, averaging 9.7 points, 7.1 rebounds and 3.1 blocks per game for the Seawolves and earning America East Defensive Player of the Year honors.

Forward Daniel Oladapo, a senior transfer from Oakland University, also had a productive 2020-21 season. In 30 games, Oladapo averaged 12.9 points and 8.8 rebounds per game. Gueye and Oladapo, along with first-year forward Nate Santos from Connecticut, will add depth to Pitt’s frontcourt to replace Champagnie and Coulibaly.

Hugley will be the x-factor in Pitt’s frontcourt this year. Legal issues derailed Hugley’s first season, but in his seven games last season, he led all returners in rebounds per game. When asked about his improvement from year one to two, Hugley said he’s grown physically and mentally.

“I feel like going into my second year — the first thing is, I’m much more in shape,” Hugley said. “But the biggest thing is that I’m more disciplined in year two.”

Good production out of him will lead to great success and another good year in rebounding for Pitt. Sophomore Noah Collier will also be big for the Pitt frontcourt. A four-star recruit coming into Pitt, a year of development should allow for him to have a predominant role in the Panthers’ frontcourt rotation.

Along with Burton, the Pitt backcourt will be led by second-year guard Femi Odukale. Odukale averaged 6.6 points and 2.2 assists per game in 2020-21 and started Pitt’s last five games due to the transfers of Johnson and Toney.

Nike Sibande, a fifth-year senior, also entered this season as a favorite to carry a bulk of the scoring load. After averaging north of 15 points per game over 97 games at Miami University in Ohio, Sibande averaged 6.9 points per game in 2020-21. He returned to form in his final five games, scoring 15 points in 35 minutes of action per game. But Sibande suffered a season-ending ACL injury during Monday’s exhibition vs. Gannon, making an already thin backcourt even thinner.

One of Sibande’s likely replacements is sophomore forward Will Jeffress. The then 17-year-old Jeffress averaged just 2.2 points and 2.2 rebounds per game in 2020 after entering as Pitt’s second highest-rated player in the recruiting class. Jeffress, with his 6-foot-7 frame and a true offseason in the books, should take a big leap and produce at a level consistent with the hype he garnered coming out of high school.

Capel, despite all the adversity and questions going into the season, believes that if everyone buys into the program, only success will follow.

The Panthers, who only won six ACC games in 2020, may struggle to reach that mark in 2021. The ACC has gotten even more competitive as Duke and North Carolina leave behind down years in 2020. Both are projected to rebound this season, along with Louisville. Louisville was an alternate in the 2020-21 NCAA tournament if a team from a multiple-bid conference was unable to play because of a COVID-19 outbreak.

Florida State and Virginia Tech seek to repeat solid 2020-21 seasons with another appearance in the NCAA Tournament. And don’t forget about the Virginia Cavaliers, who are always a conference contender and earned a four seed in the NCAA tournament last year.

The Panthers will need substantial production out of their second-year players and transfers to have a chance at making noise in the ACC. The Panthers haven’t finished with a winning record in any of Capel’s three seasons as head coach, and aren’t projected to improve on that mark. But Hugley said he will use the low expectations as fuel this season.

“Being picked almost last puts a chip on our shoulders,” Hugley said.

This article has been updated to reflect Sibande’s season-ending injury.