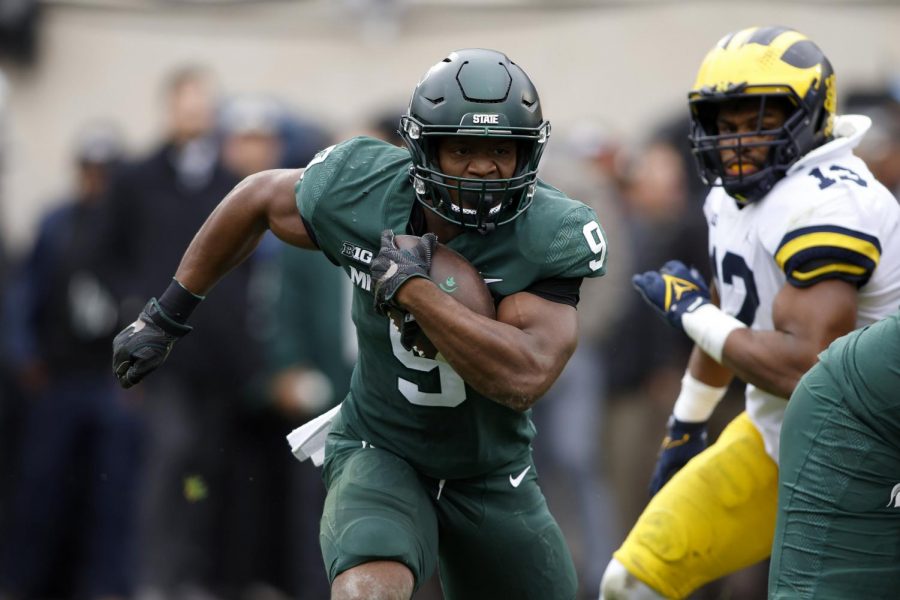 Michigan State's Kenneth Walker III (9) runs with the ball during the first quarter of a game against University of Michigan at Michigan State’s Spartan Stadium in East Lansing, Mich. on Saturday.

In this week’s Take 5, The Pitt News sports desk takes a look at everything from the College Football Playoff rankings all the way to who the next New York sports team to hoist a championship trophy will be.

Pitt men’s basketball senior guard Nike Sibande tore his ACL in its 89-64 exhibition victory over Gannon on Monday night, ending his season. There was plenty of excitement surrounding Sibande’s offensive ability, as he averaged 15.0 points over the final five games of last season, while shooting 50.7 percent from three-point range.

With Sibande sidelined, multiple players on Pitt’s roster must step up and consistently make shots for the Panthers to have success offensively. But there’s one particular player with the ability to largely fill Sibande’s void –– junior guard Ithiel Horton.

Horton functioned mostly as a spot-up shooter in last year’s offense, and will now be called upon to play within Sibande’s role as a primary shot creator. Horton will now look to shoot off-the-dribble more often from three and even in the mid-range. If he becomes more comfortable getting in the lane and attacking the rim, he should earn a lot more trips to the foul line as well.

Offensive droughts have been characteristic of Capel’s tenure thus far. The Panthers need a shot creator now more than ever and Horton can provide that presence.

Alabama’s No. 2 ranking is the right one // Jermaine Sykes, Staff Writer

The Alabama Crimson Tide opened up ranked No. 2 in the initial College Football Playoff rankings to the dismay of many.

But the Crimson Tide deserve their ranking.

While No. 2 Alabama suffered a tough 41-38 loss to Texas A&M — No. 14 in the first CFP rankings — on Oct. 10, its case for the playoff is stronger than any team not named the Georgia Bulldogs.

Alabama has embarrassed their competition this season. In its eight games this season, six of the contests have been decided by over 30 points. Even in their “close” 31-29 win over the Florida Gators, the Crimson Tide led 21-9 at halftime before the Gators made a late push.

Alabama’s competition for the No. 2 ranking are No. 3 Michigan State, No. 4 Oregon, No. 5 Ohio State and No. 6 Cincinnati.

Michigan State and Ohio State play each other on Nov. 20, with the winner most likely eliminating the loser from playoff contention.

Oregon has the lead in the PAC-12, but a loss against an unranked Stanford puts a stain on their resume. Cincinnati, the only non-Power 5 school in the top-10, has the No. 100 ranked strength of schedule in the nation — an undefeated season won’t help them much.

Alabama controls its own destiny. Winning out the regular season and beating the No. 1 ranked Georgia Bulldogs in the SEC championship will secure a trip to the playoff.

Michigan State’s Walker is the most deserving of the Heisman // Brian Sherry, Staff Writer

As the college football season slowly winds to a close, the Heisman debate is beginning to heat up. While quarterbacks such as Ole Miss junior Matt Corral, Alabama sophomore Bryce Young and even Pitt redshirt senior Kenny Pickett continue to be thrown around in the conversation, there is only one player who truly deserves the hype.

The junior running back currently ranks No. 1 in rushing yards per game while leading his team to an 8-0 record. Against No. 7 ranked Michigan, Walker accounted for five rushing touchdowns and 197 yards in a win over the Wolverines.

In the biggest game of his season, Walker not only put up a clutch performance, he dominated.

But with four weeks left in the regular season, Walker still needs to rack up impressive numbers to secure the trophy. The Nov. 20 match up against No. 5 Ohio State will be the biggest test left for Walker. If he can continue to put up Heisman numbers in that game, then he will be the player hoisting the trophy in New York on Dec. 11.

The New York Giants won Super Bowl 46 on Feb. 5, 2012. Since then, no New York-based team has lifted a championship trophy. The Rangers made the Stanley Cup final in 2014 and the Mets followed that up with a World Series appearance of their own the next year. Both teams lost in five games.

With 11 teams in the greater NYC metro area, one of them is bound to win a championship soon, but who? The Yankees? They haven’t been able to win the big games. The Nets? With Kyrie absent it could be tough sailing. NYCFC? They haven’t proven to be title contenders.

The best shot actually belongs to the New York Islanders.

Coming off back-to-back conference finals appearances, the Islanders have the sixth-best odds to win the Stanley Cup according to DraftKings, thanks in large part to their lockdown defense. The Islanders finished No. 2 in goals allowed last season, and are currently No. 5 in the same stat this year. This has come about under their president and general manager Lou Lamoriello, and their head coach Barry Trotz, who have taken the Islanders to heights not seen since the 1980s.

Defense wins championships, and with two defensive-minded names running the show, expect the Islanders to lift Lord Stanley for the first time since 1983, and for New York’s first title in a decade.

The narrative surrounding the recently concluded World Series revolved around a cheating scandal that has followed the Houston Astros since the 2017 playoffs. It seems the desire to see the Astros lose clouded the true bright side to a feel-good story.

The Atlanta Braves are a collection of wonderful stories — the type that serve as a reminder as to why sports are so special.

Known around the league as one of the most friendly players in the game, Freddie Freeman made his first World Series despite five prior postseason appearances. The 12-year veteran’s Braves were labeled as a team that peaked in the regular season. But the team put this narrative to bed after bringing home hardware after a season in which they had a 10% chance of making the playoffs entering August.

Elsewhere, there’s third base coach Ron Washington. With more than 40 years of time as a player and coach, Washington suffered consecutive defeats in the World Series while managing the Texas Rangers in 2010 and 2011. At age 69, it was fair to wonder whether he would get another chance at a ring. He finally did, and played a large role in Atlanta’s fourth championship.

Instead of being happy that the Astros lost, let’s celebrate the Braves.