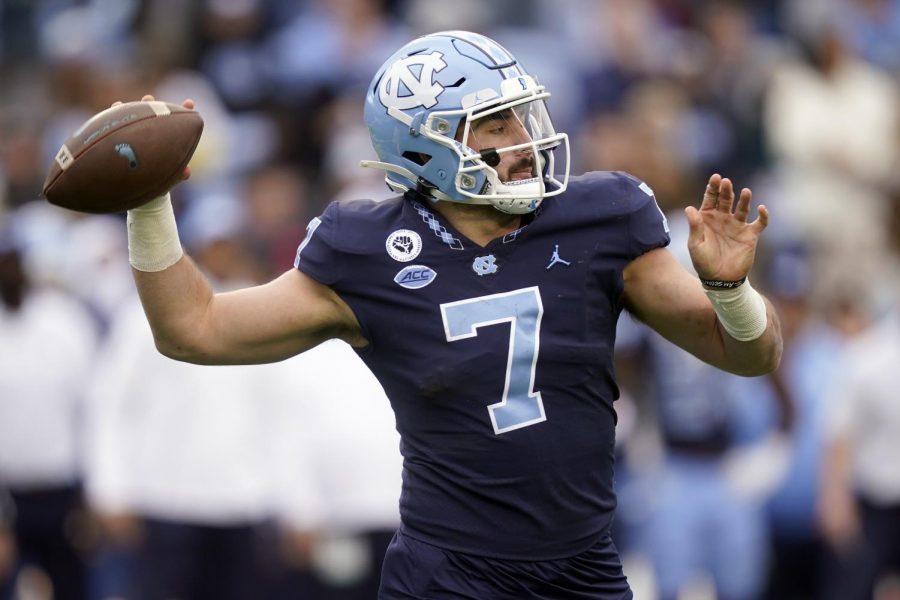 Quarterback Sam Howell, pictured, and the UNC Tar Heels will come to Heinz Field to take on the Panthers on Thursday evening.

Pitt soundly beat the Duke Blue Devils on Saturday, giving the Panthers a lot to be pleased with on both sides of the ball. But the amount of time they have to enjoy the win is short-lived. The Panthers’ 24-hour rule to enjoy the win went to a 12-hour rule after their win over Duke, according to redshirt senior quarterback Kenny Pickett.

“I think it’s 12 hours this week,” Pickett said. “We’re going to be right on to North Carolina tomorrow … I know we’ve got some guys banged up, but we’ll try to get as healthy as possible. It’s really kind of a mental preparation this week more than physical.”

Pitt (7-2, 4-1 ACC) will welcome the UNC Tar Heels (5-4, 3-3 ACC) to Heinz Field this Thursday for another ACC battle. The two teams are both coming off of wins, but have quick turnarounds for the game on Thursday. Pitt wasted no time getting back to work and started preparing Sunday, according to head coach Pat Narduzzi.

The Tar Heels came into the season with hopes of a trip to the College Football Playoff and opened up as No. 10 in the country. Junior quarterback Sam Howell came into the season widely regarded as one of the highest-rated NFL prospects. It’s been a fall from grace for the Tar Heels and Howell as they plummeted out of the Top-25, and Howell is far from a lock to hear his name called in the first-round.

On the opposite side, Pickett and the Panthers have exceeded expectations, climbing as high as No. 17 in the country. Although they’ve stumbled a few times this season, the Panthers still “control their own destiny” to an ACC Championship, as Narduzzi said last week. But as always, Narduzzi’s goal is just to go 1-0 this week.

Here’s what to look for in Pitt’s next obstacle in booking a trip to the ACC Championship Game.

It’s rare for fans to get a glimpse at two potential first round NFL draft picks in one game — let alone two quarterbacks. College football fans will have the opportunity to do just that Thursday.

Howell and Pickett will meet up on national television, with not just the entire nation watching, but also NFL scouts. Narduzzi said he’s heard that there will be 36 NFL scouts at the game. He said the ability to see these players live allows scouts to see their character — something the cameras don’t always pick up.

“I think it’s interesting for some of those guys to come to games and watch, just see it live,” Narduzzi said. “When the camera turns away, you don’t see all the in-between stuff. You don’t see how he’s acting on the sidelines. Scouts are looking… Who is he not only as a football player but as a person.”

Howell is versatile — just as good, if not better, at running the football than he is throwing. This is something that Narduzzi is aware of and is making sure his defense is ready for whatever UNC throws at them.

“He’s been great for two years,” Narduzzi said. “He runs like a tailback. I mean, he is scrambling. What you didn’t see the last two years is his ability not only to scramble, but now they’ve got designated quarterback runs, okay? We prepared real hard for all their draws.”

The spotlight will be on the quarterbacks on Thursday. With NFL scouts in attendance, Howell and Pickett have the opportunity to prove that the hype that comes with their names is warranted.

Slow defensive starts have been an area of concern for the past month or so for the Panthers. Against most teams, Pickett and the offense have compensated for the slow starts with explosive plays. But Pitt may not be as lucky against UNC.

UNC boasts the ACC’s No. 3 offense and is going to be able to hang around with Pickett and his offense. If UNC jumps out to a quick lead, Pitt could be in trouble.

It starts with stopping the running game. The Blue Devils gashed the Panthers with zone runs the entire first quarter, exposing tackling issues and a lack of a push up front. Duke did have graduate transfer Carson Van Lynn, a former Panther, on its offensive line. Narduzzi said he thought Van Lynn was able to sniff out what kind of pressure was coming based on the way the Panther defense was lined up.

Whether or not this is true, Pitt needs to prevent these explosive run plays and avoid a slow start. If Pitt allows Howell to jump out to a sizable lead early, the Panthers may not be able to climb back like they have in the past.

Short turnaround from one game to the next

The Panthers have a quick turnaround this week, losing two days of rest and preparation with the game landing on a Thursday. Pitt has been relatively healthy this year, but the last few weeks have been a different story as the injuries started to pile up.

Receivers sophomore Jaylon Barden and senior Taysir Mack already missed last week’s game after going down with injuries against Miami. Initially, it didn’t seem like there was too much cause for concern. But Narduzzi described their chances to return before the end of the season as a “possibility” last week.

The Panthers racked up a couple more injuries at Duke this weekend. Most notably, redshirt senior defensive tackle Keyshon Camp, who left the game early with a leg injury and returned to the sidelines with crutches and in a boot.

Redshirt seniors offensive linemen Owen Drexel and Gabe Houy also spent time with the training staff to tend to some typical stingers during the game. Even if the injuries don’t keep these players out of the game Thursday, the short turnaround undoubtedly puts them at extra risk — something Narduzzi took exception to.

“You always get concerned,” Narduzzi said. “There’s bumps and bruises and the NCAA continues to like these Thursday night games and it’s not good for the health of our kids, period.”

Narduzzi expressed frustration with the game scheduled on a Thursday, as it gave himself and the rest of the program little time to regroup.

“The thing people don’t realize, they think we just go out and play football, put the ball out there, spot it, let’s go,” Narduzzi said. “Sunday we had to close the book on Duke, make the corrections on special teams, defense, offense. Then we had to flip it around and as coaches, you weren’t spending time on North Carolina before you could. You had to focus on Duke.”

Narduzzi said he will have his guys ready even on the short turnaround.

Prediction | UNC’s lack of firepower on offense will give Pitt the edge, Panthers win 45-31

Howell had offensive weapons galore last year, leading to his success and preseason hype. But it’s been abundantly clear Howell has severely missed his running back tandem of Javonte Williams and Michael Carter — both now NFL players. The Tar Heels also lost one of their top receivers in Dyami Brown when the Washington Football Team selected him in the NFL Draft.

The Tar Heels have made the necessary adjustments to compensate for these absences over the course of the season. UNC is also coming off of an upset victory against the then No. 9 and undefeated Wake Forest Demon Deacons.

Thursday’s game has the makings of an offensive shootout written all over it, with two quarterbacks in need of big games to bolster their draft stock against defenses that have been less than inspiring as of late. Whoever comes out on top of this one will come down to who can win the shootout.

Pickett has the weapons — he has the homefield on his side and he’s a more polished player than Howell. Pitt has already faltered down the stretch and there’s no room left for error — don’t expect Pickett to let his team stumble again.

The game will kickoff on Thursday night at Heinz Field at 7:30 p.m. and air on ESPN.