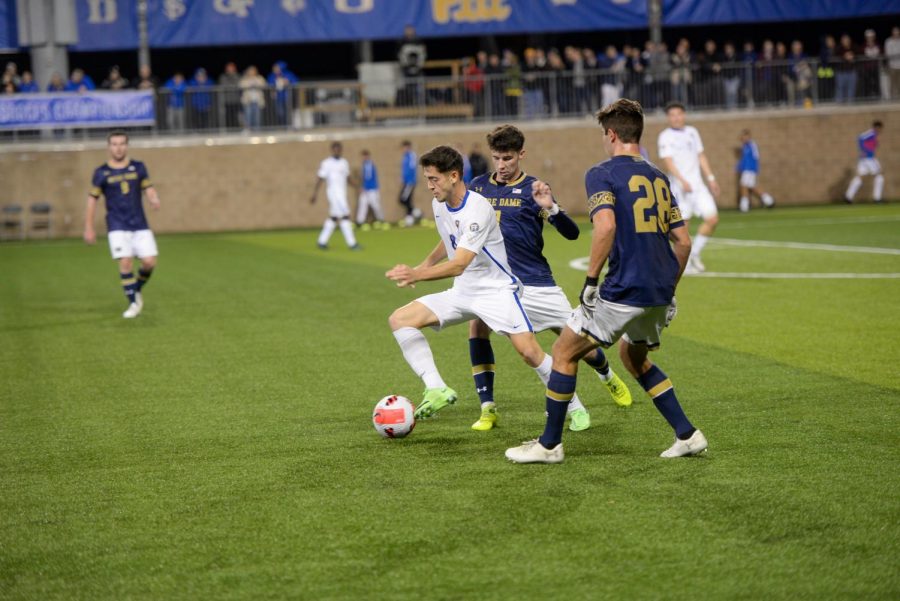 Coming off an emotional, double-overtime victory in the quarterfinal round, top-seeded Pitt men’s soccer fell to the No. 5-seeded Notre Dame Fighting Irish in the semifinals of the ACC Championship, 2-0. After falling to Notre Dame in double-overtime on Oct. 16, the Panthers sought redemption, but fell short in the second half.

The Panthers controlled possession from the opening kick, and it didn’t take them long to generate some quality looks at goal. Star junior midfielder Valentin Noel rocketed a shot attempt just wide of the right post in the fifth minute, appearing to spark the Panther attack. Pitt generated three consecutive corner kicks just a few minutes later, but could not find the back of the net.

Pitt continued to maintain possession, and forced Notre Dame into quick mistakes whenever the Fighting Irish earned the ball. The next significant moment came in the 15th minute, when a Notre Dame defender deflected a shot in the 15th minute from first-year midfielder Guilherme Feitosa. Sophomore goalkeeper Bryan Dowd saved it narrowly. Head coach Jay Vidovich highlighted Pitt’s early aggression as a focal point of the game plan.

“We kept trying to take the game to them,” Vidovich said. “We tried to be the protagonists and control the tempo and the game.”

In the 24th minute, the Panthers manufactured yet another threatening chance, when a lofted cross from senior forward Alexander Dexter found the head of Feitosa, who missed just high of the crossbar. But Notre Dame was quick to get on the counter-attack, as first team All-ACC senior forward Jack Lynn faked out a Pitt defender to give himself a clear shot attempt in the 26th minute. Senior defender Arturo Ordoñez slid in at the last moment to block the shot and invigorate the home crowd.

Pitt held the majority of the possession for the remainder of the first half, but did not manage another shot on goal. In the 37th minute, graduate goalkeeper Nico Campuzano saved the lone shot on-goal he faced in the half, and the Panthers entered the halftime break tied, 0-0.

Despite earning seven corner kicks to Notre Dame’s zero, Pitt ended the half tied with the Fighting Irish at just one shot on-goal each. The Panthers created far more quality chances than their opponent in the first half, and controlled possession and pace. While Vidovich was pleased with how Pitt controlled the match, he found Pitt’s failure to capitalize costly.

“I thought we did a good job possessing the ball, moving them, finding some pretty good spaces,” Vidovich said. “We didn’t capitalize in the first half, and you know, I think blood was in the water, and we failed to push on it and find it… maybe that was part of our problem.”

The Fighting Irish played with more composure to start the second half, and kept the Panthers from generating any threatening chances for the first 15 minutes of the period. But around the 60th minute, the tide started to turn back in Pitt’s favor. The Panthers earned another set of four consecutive corner kicks across a span of three minutes, but once again could not capitalize.

Pitt seemed to have largely regained control of the match, but Notre Dame broke through in the 72nd minute on the counter-attack. Campuzano saved a dangerous shot off the foot of Lynn, and the Panthers withstood the second shot-on-goal of the match from the Fighting Irish.

Notre Dame completely blew the match open just a few minutes later. In the 76th minute, Lynn snuck his third shot of the match past Campuzano to give the Fighting Irish a 1-0 lead. A mere 14 seconds later, Lynn got behind the Panther backline yet again, and passed the ball across the box to sophomore forward Daniel Russo, who put Notre Dame up 2-0 in the 77th minute. Vidovich described this defensive lapse as a product of his team’s own mistakes.

While Pitt had a few more promising chances to respond, Dowd held strong in net for Notre Dame and made two saves in the final 10 minutes of play. The Fighting Irish held on and defeated the Panthers by a score of 2-0. Vidovich highlighted similarities in how the game panned out in the first and second meeting between the two sides.

“It was no different in the first half at Notre Dame, and they also had a better second half against us at their place, as they did here,” Vidovich said. “There really wasn’t much of a change, they got their goals on a play and off a mistake.”

With the loss, the Panthers are eliminated from the ACC Championship tournament. Despite the defeat, Pitt has positioned itself extremely well to earn an at-large bid in the NCAA Tournament. When asked about his message to the team moving forward, Vidovich didn’t believe he’d have to do much motivating.

“I don’t think I have to say too much to them,” Vidovich said. “They came here to lift trophies, and they’re devastated right now… Our guys are ambitious, they don’t have to chase. They’re very disappointed.”

The Panthers are poised to earn a high seed, and hope to extend their season and be selected to the NCAA Tournament when the field is announced on November 15.