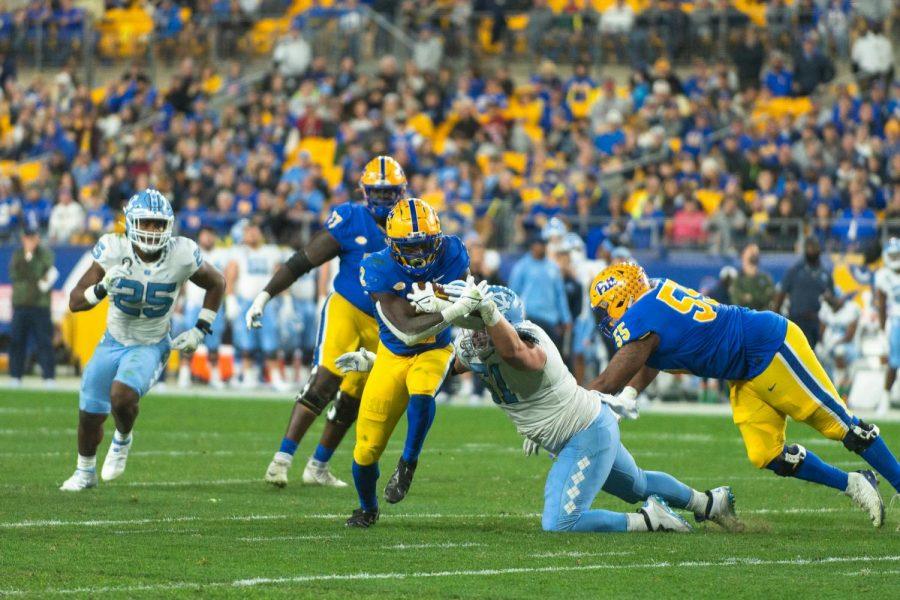 Pitt sophomore running back Israel Abanikanda (2) runs with the ball at Thursday evening’s game against UNC.

A game that many saw as a clash between two of the NFL Draft’s highest rated quarterback prospects finished with neither player being the game’s biggest story.

Instead, it was the defenses which stole the show, holding the ACC’s No. 3 and No. 1 offenses to just a combined 46 points in regulation. Pitt senior linebacker Phil Campbell III said he and the defense didn’t feel respected coming into Thursday evening’s game against North Carolina and it fueled their unit.

“We took it personal today,” Campbell said. “I think it showed.”

The Panthers welcomed the Tar Heels to Heinz Field for a mid-week ACC battle and won despite a second-half collapse, taking down the Tar Heels 30-23 on a rainy Thursday evening. The last nine meetings between the two programs have been decided, on average, by just 4.2 points — this one was no exception to this trend.

The Pitt offense and redshirt senior quarterback Kenny Pickett once again used the first drive to work out some of the kinks. The offense failed to convert a fourth-and-one play from the Tar Heels’ six-yard line and the Panthers turned the ball over on downs.

But in the defense’s first appearance of the game, it made its presence felt.

Linebackers senior Cam Bright and junior SirVocea Dennis each picked up tackles for loss, electrifying the crowd and forcing a three-and-out. Addison returned the Tar Heel punt to the opponent’s 20-yard line and Pickett did the rest.

After a string of completions, the offense made its way inside of the Tar Heel five-yard line and offensive play caller Mark Whipple opted to keep the ball on the ground. Junior running back Vincent Davis took the handoff from two yards out and into the end zone to put the Panthers on the board first.

The Panther defense forced another three-and-out on the ensuing drive, giving Pickett a chance to extend the lead. He did just that. On four plays, Pickett drove the offense 48 yards down the field and capped it off with a touchdown. Pickett rolled right and found first-year tight end Gavin Bartholomew in the end zone. The Panthers were out to a quick 14-0 lead.

The Tar Heels and junior quarterback Sam Howell got a third shot at trying to figure out the Pitt defense. They didn’t. On the third straight drive, the Panther defense forced another three and out. The Panthers’ front seven made their presence known, flying into the backfield and giving the Tar Heels no room to run. The defense picked up four sacks while surrendering just seven yards on the first four drives.

Head coach Pat Narduzzi said earlier this week that the defense needed to be ready for the Tar Heels to run designed runs with Howell. The seventh-year head coach said he thought the defense handled these types of plays very well.

“We did a great job,” Narduzzi said. “When you talk about pure quarterback runs, I think we handled him better than anybody did.”

The Tar Heels kept themselves within striking distance with the touchdown but Pickett wouldn’t let them back in this one.

Injuries to top receivers senior Taysir Mack and sophomore Jaylon Barden left some fans worried about who would be Pickett’s second option. But junior receiver Jared Wayne proved he could continue to be a solid option for Pickett in the passing game against the Tar Heels.

After the Tar Heels eventually got on the board, Pickett and Wayne wasted no time picking their defense up. Pickett found Wayne for 27 yards on the first play of the drive and just four plays later, they connected again.

Pickett weathered the pressure from the Tar Heels and absorbed a hit as he released the ball in Wayne’s direction. The junior receiver hauled it in over his shoulder in the end zone to put the Panthers up 23-7.

The Panthers took this score to the half, outpacing the Tar Heels 337 to 121 in total yards of offense. Howell found himself on the ground often in the first half, with the Panthers picking up five sacks. Pickett gave the defense credit with the win on Thursday, after they kept Pitt in the game.

“Our defense did a great job,” Pickett said. “A lot better complimentary football … this one 100% goes to them.”

But Howell and his offense came out firing to start the second half and marched all the way to the Panthers’ 23-yard line. Faced with a fourth-and-one and down by 16 points, Tar Heel head coach Mack Brown opted to go for it. Brown called a designed run for Howell but senior defensive lineman and senior linebacker Phil Campbell III stonewalled the run, forcing a turnover on downs.

The Panther defense broke on the next drive, though, as Howell picked apart the secondary with slants and passes to the middle of the field. Howell led his offense 53-yards, capped off by a 23-yard touchdown pass. But the defense stopped the Tar Heels from converting a two-point conversion to keep it a two-possession game at 23-13.

It was a defensive stalemate for much of the second half until the Tar Heels broke through halfway through the fourth quarter. A 46-yard completion from Howell put the Tar Heels on the one-yard line. Howell capped off a 92-yard drive, rushing in a designed run himself to pull the Tar Heels within three points.

The Tar Heels sent the ball back to the Panthers, but it wouldn’t be long before Howell had another shot on offense. Pickett threw a pass behind his receiver and the ball fluttered through the air and into the arms of the UNC defense, giving the ball right back.

Howell moved the ball inside of the Panthers’ five-yard line with just more than a minute remaining. But the Panther defense did not break and the Tar Heels settled for a field goal to tie the game, leaving the Panthers with just 57 seconds and no timeouts to work with.

Pickett couldn’t do much on the final drive and the clock hit zero with the score all knotted up at 23, sending the game to overtime.

Pitt started with the ball in overtime and Pickett wasted no time, finding redshirt senior tight end Lucas Krull for an 11-yard touchdown to put the Panthers up 30-23.

The Tar Heels got their shot at the end zone, but Howell wasn’t able to lead a scoring drive this time around. On fourth-and-11, Howell tossed up a prayer and the ball fell into Pitt’s sophomore defensive back M.J. Devonshire’s hands to put the game on ice.

Devonshire, a native of nearby Aliquippa, said the moment meant a lot to him.

“I did a lot of screaming after that interception,” Devonshire said. “It was my first one that really counted, so I was kinda excited.”

Pitt will ride the victory into next week’s matchup at home with the Virginia Cavaliers. The game time will be announced later this week.