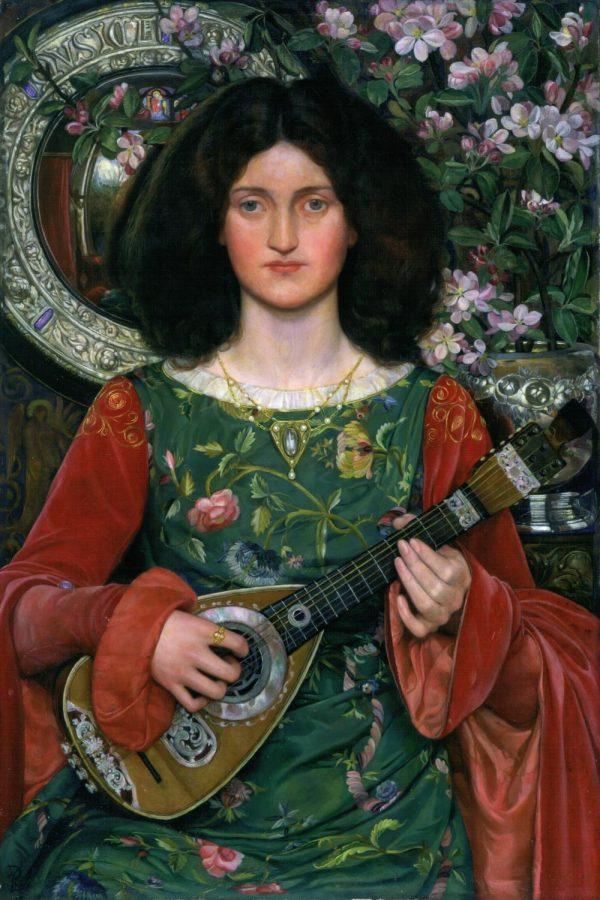 By Katelyn Kruszewski, For The Pitt News

A brightly colored portrait of a woman playing the lute greeted guests at the Frick Museum, where observers crowded in the gallery’s small entryway to read the plaque identifying Kate Elizabeth Bunce’s “Melody (Musica).”

Organized by the American Federation of Arts, the art exhibit Victorian Radicals debuted Nov. 6 at the Frick Art Museum, located in Pittsburgh’s Point Breeze neighborhood. The exhibition, which will be on display through Jan. 30, 2022, features a series of artworks that have never been exhibited outside of Birmingham, United Kingdom.

Elizabeth Barker, executive director of the museum, said in a press release the Frick is delighted to share these works with the Pittsburgh community.

The exhibit displays artistic works developed during the second half of the 19th century. It features two generations of artists and designers. The exhibit displays the Pre-Raphaelite Brotherhood and champions of the Arts and Crafts movement who influenced the visual arts in Britain during the Industrial Revolution.

Tickets for members of the museum are free. Adult tickets are $15. Student tickets are $13 with a student ID. Tickets for the exhibit must be purchased beforehand online and are scheduled out to adhere to COVID-19 guidelines.

Dawn Brean, chief curator and Collections director, said in a press release that the artists featured at Victorian Radicals remain influential today in the modern world.

“These artists genuinely believed in the capacity of art as a force for social good,” Brean said. “They rejected the prevailing thinking of the day and envisioned a better future by, somewhat surprisingly, looking to the pre-industrial past. They prized truth, nature, authenticity and the handmade. Their search for beauty in an age of industry generates questions that remain as relevant today as they were then.”

Katie Levy, an industrial designer from Pittsburgh’s Polish Hill neighborhood, said the exhibit stood out to her, particularly because of its historical context and influence on later artists.

“A lot of the processes that were invented in this time are still used today,” Levy said. “It was kind of the early mass manufacturer in bringing high design to the middle class.”

Victorian Radicals includes the works of artists who influenced visual culture in Britain and throughout the world. The gallery displays paintings, jewelry, textiles and metalwork that use vibrant colors and detailing to convey literary themes as well as the contemporary life of the time.

Judy Knapp, a Pitt alumna and resident of Ligonier, said she does not follow art closely but enjoyed the visual detailing of the works.

“The detail, the colors, they’re exquisite. You could just study them forever,” Knapp said. “It would be so wise to open yourself up to the themes.”

The exhibit explores the relationship between art and nature, class differences and a general search for beauty in the age of industry through mythology and fairy tales. Mythological works included art surrounding the Greek and Roman myths of Proserpine and Medea. Fairy tales included figures such as Beauty from Beauty and the Beast as well as Morgan-le-Fay from the legend of King Arthur.

The works on display aim to represent a spectrum of avant-garde practices within the historical Victorian Period that embodied aesthetic and social ideals. These artists used fine details, metalwork, and vibrant colors to combat the increase of mass manufacturing within society.

Hannah Petrazio, a Mount Lebanon resident, also grew up attending field trips to the Frick Museum. She said she was interested in the political message of the pieces.

“You read the little blurb and it was actually a heightened time of political climate so it was kind of cool to see a snapshot of a different political space 200 years ago,” Petrazio said. “It’s nice to see history through someone else’s eyes, especially in this style.”

Parker Trow, an industrial designer from Polish Hill, said he visited the museum growing up. He said the exhibit stood out to him because of its historical value, and noted ironic placement in the Frick because of the exhibit’s theme of combating industrialism, as the museum is named after industrialist Henry Clay Frick.

“It was a really cool time for art. I actually didn’t know much about this group of artists,” Trow said. “It’s that mixture of it being a small group of artists that were kind of focused on something that was lesser known in that context of Britain. That start of the industrial revolution in the context of it being in the Frick as well, that puts it in a great place.”

Levy said she encourages others to take advantage of the exhibit and its history while it’s available.