First game back at the Pete met with excitement, cautious optimism 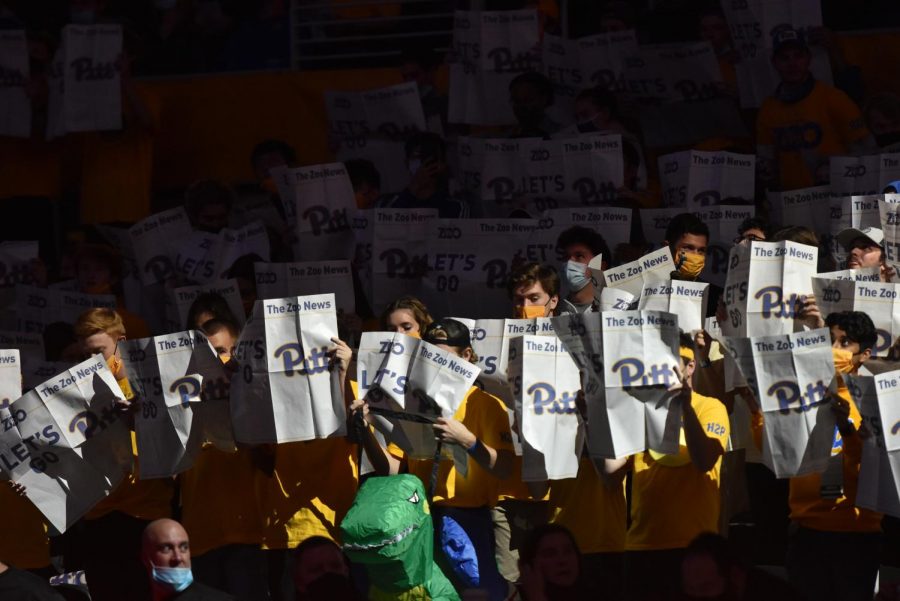 By Christopher Cornejo, For The Pitt News

Pitt men’s basketball is back and with the team comes the feeling of worry surrounding the team and the upcoming season.

They ultimately fell 78-63 to the Bulldogs, which is one of 44 Division 1 basketball programs in the nation to never make the NCAA Tournament. This loss kicked off a season with a tumultuous preseason. But it didn’t stop fans from flocking to the Pete to watch their team and share their thoughts on the upcoming season.

Limited capacity restrictions did not allow for many spectators to occupy seats in the Pete during last year’s season. The COVID-19 pandemic caused heavy restrictions on attendance for the Panthers, affecting home game atmospheres around the country.

The Oakland Zoo, widely regarded as one of college basketball’s best student sections, was missing and everyone felt it.

But this season, fans returned to the venue in full showing, hoping to lend their support to the Panthers on opening night.

Security checkpoints took over the primary entrance to the Petersen hours before the Panthers were set to tipoff, as the energy from the incoming fans continued to grow. The young Panther squad, after enduring months of training and adjusting, would finally receive their first challenge.

Students made up a large number of those arriving at the arena. Pleasant weather and busy streets provided a refreshing backdrop for the first game of the season and for many students, the first game of their time at Pitt. These students arrived with enthusiasm and strong support for their team. Simon Clark, a sophomore media and professional communications major, was among the students in the Oakland Zoo.

“I’m a sophomore, so this is my first time experiencing a game in person with a crowd and everything like that,” Clark said.

Clark is a loyal fan and, although the program has struggled within the past few years due to COVID restrictions as well as poor play, he is optimistic the school is prepared to return to supporting their Panthers.

“I’m a part of the Oakland Zoo, and I know the student body is going to rally behind them,” Clark said. “We have the best student section in the country, in my opinion.”

Poor performances are not the only struggles this Pitt basketball team will have to overcome — events on and off the court have plagued the team.

Senior guard Nike Sibande tore his ACL in the past week. On top of Sibande’s injury, junior guard Ithiel Horton is facing legal issues after allegedly punching a police officer and being arrested for aggravated assault and public drunkenness, among other charges. Horton is suspended indefinitely. Clark, however, is still hopeful.

“We lost Champagnie last year, so it’s tough to see who’s going to fill that void,” Clark said. “We’re young, and I’m excited to see us develop throughout the year — we may not be the best team, but I’m excited.”

Clark is not the only student looking forward to the season and easing of restrictions. First-years at Pitt are especially excited to experience campus life.

“I’m excited for the feeling of being a family at such a big school,” Alexander said. “Coming from a small high school I never really experienced that, but I have Panther pride and I’m ready to show it.”

“I’m just excited about actually being in school since I missed every sport my senior year in high school,” Poness said. “It’s exciting to watch sports and be a fan.”

Students weren’t the only fans present for the Panthers. Joe Andrejcik, a long-time Panther fan and Scott Township resident, was in attendance Tuesday night to support his favorite college team.

“I’ve been a fan since I was a kid, and I’ve been coming to the games since the ‘70s,” Andrejcik said. “I attended games at the [Fitzgerald] Field House and former Pitt Stadium.”

Although he’s been a fan for a long time, Andrejcik is approaching this season with a mix of optimism and concern.

“Hopefully they can adapt well,” Andrejcik said. “I was definitely more optimistic before the injuries and legal issues arose.”

The Panthers will travel to West Virginia University this Friday to compete in the Backyard Brawl, in search of their first win of the season against the long-time rivals.