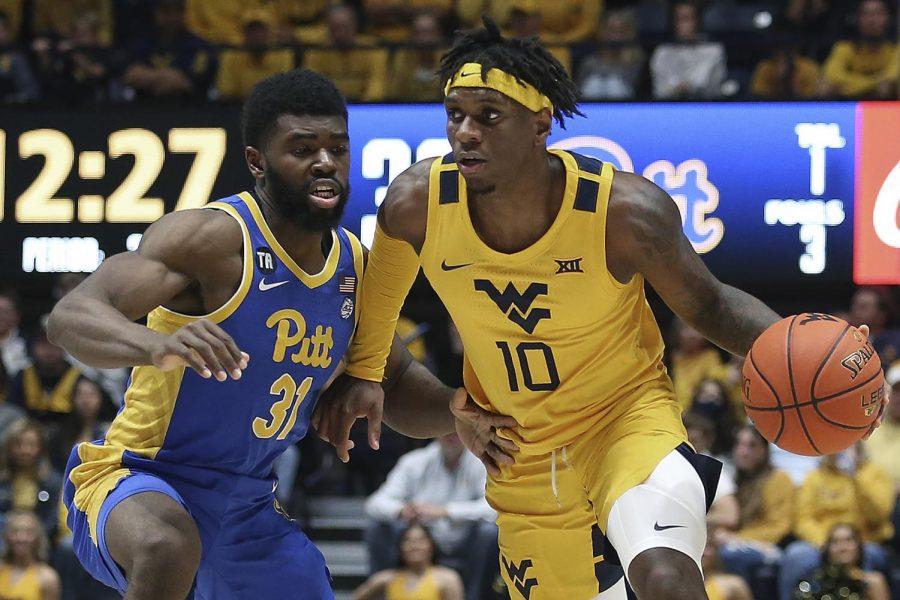 MORGANTOWN, W.Va. — The WVU Coliseum — sold out and awash in Mountaineer gold — rocked like it only could for a Backyard Brawl. In front of an animated home crowd, Pitt and West Virginia played a game befitting its nickname. Both teams played with tremendous energy and fed off the visceral hatred this rivalry elicits.

But the Panthers — down three of their top four guards and facing a Bob Huggins-coached defense that has become infamous for its relentless pressure — were outclassed by the Mountaineers. They succumbed to “Press Virginia,” turning the ball over 32 times in a 74-59 loss on Friday night in Morgantown, West Virginia.

Pitt’s scrappy play kept the game close, but ultimately, the classic full-court press from WVU won out. The pressure didn’t come as a surprise to the Panthers, but they were nonetheless unable to handle it.

“We tried to simulate their pressure and how ferociously they play defense as best as we could [in practice],” sophomore forward William Jeffress said. “It’s not something we didn’t expect coming into the game. … That’s what they are. That’s what they always have been.”

The Panthers started strong, and jumped out to an 8-4 lead by the under-16 media timeout. But West Virginia roared back with eight consecutive points. The game’s pace slowed as the physicality ramped up.

Sophomore point guard Femi Odukale was at the center of more than a few loose-ball scrums. He quickly became a popular target for the jeers of home fans.

After nailing a jumper for his third and fourth points of the evening, Odukale turned to the WVU student section, held his arms wide and blew a kiss. For the rest of the night, Pitt’s starting point guard was subject to chants of “No. 2 sucks” and choruses of boos everytime he touched the ball. And they had plenty of opportunities to jeer the Panther floor general.

It was a frustrating night for Odukale, whose eight turnovers and 28% shooting clip was emblematic of Pitt’s night. One of his turnovers late in the first half caused head coach Jeff Capel to jog down the sideline and kneel in front of some members of the Mountaineers dance team and appeared to ask, in jest, if they had any answers for his team’s ball-security issues.

Capel said postgame that he thought that everyone on the team, not just Odukale, were pressing and trying to do too much.

“I thought all of our guys at times tried to do a little too much,” Capel said. “There was a little too much dribbling instead of making the simple, easy decisions. A lot of times, those decisions were right there in front of us.”

The frequent turnovers proved impossible to overcome and torpedoed any chance the Panthers had to get back in the game.

Pitt attempted 19 fewer shots from the field than the Mountaineers and committed 18 more turnovers. The Panthers shot well, 58% for the evening, but the giveaways limited their offensive opportunities.

The Panthers made a late, but ultimately futile, charge back during the second half, and it was led by sophomore forward John Hugley.

After spending most of the first period on the bench with two fouls, Hugley got hot quickly. He scored six quick points to breathe some life into the visitors’ cause. Graduate forward Mohamadou Gueye took a charge right before the under-16 media timeout, then the Mountaineers left Nate Santos wide open for a fast break dunk and Jeffress made a free throw to cap a 7-0 run that trimmed the deficit to 10 with 14 minutes remaining.

But the momentum was short-lived.

With less than five minutes remaining, the home fans alternated between chants of “Eat S—t Pitt” and “We want The Citadel” — a jab at Pitt’s season-opening loss to the Bulldogs.

Hugley, who finished with 17 points and six rebounds despite the limited playing time, led the Panthers in scoring.

The Panthers are back in action on Tuesday. They will seek their first win of the season when they welcome UNC Willmington to the Pete for a 7 p.m. tipoff. The game will be broadcast on ACC Network Extra.