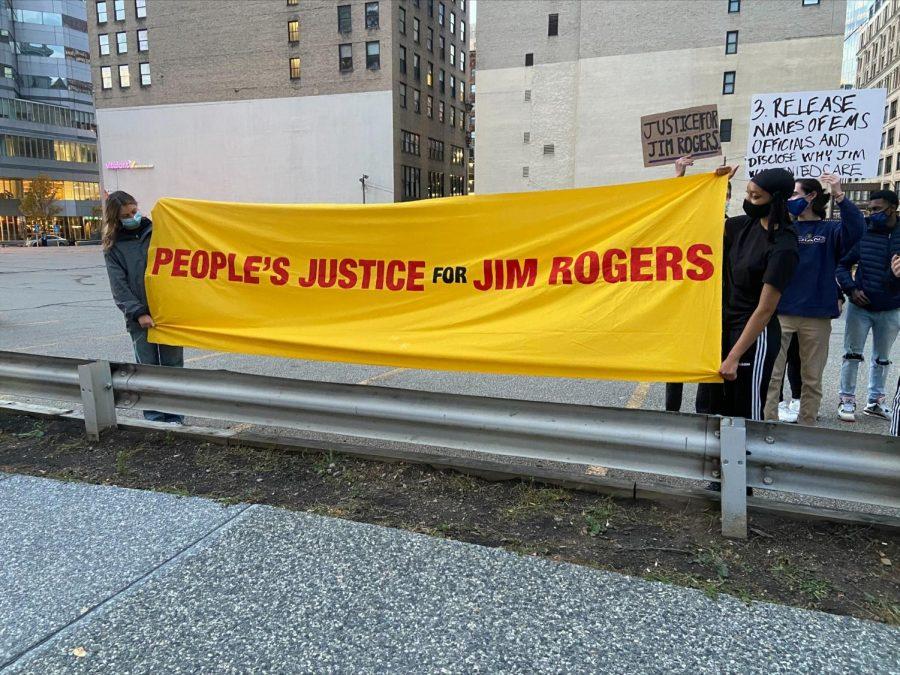 Protestors hold up a sign that reads “People’s Justice for Jim Rogers” outside of the City-County Building in Downtown last Friday.

In front of the City-County Building in Downtown Pittsburgh last Friday, dozens of people stood in the middle of the street, chanting “People’s justice for Jim Rogers” and singing “Jim Rogers was a freedom fighter.” Protesters also carried banners saying “Justice for Jim Rogers.”

Jim Rogers died on Oct. 14 about one day after a Pittsburgh police officer struck him with a taser in Bloomfield. Friday’s rally on Grant Street wasn’t the first surrounding Roger’s death, with a similar protest on Oct. 22. Demonstrators demanded more transparency about his death as well as justice for him and his family by identifying and prosecuting the officers involved.

Pitt community members, such as Destiny Mann, the president of Pitt’s Black Action Society, attended and supported the protest. Mann, a senior political science and Africana studies major, said while police brutality and injustice have been ingrained in the Black community for a long time, people should continue to push for justice.

“Unfortunately, the pain in his death is all too familiar in the Black community. The long, long history of legally sanctioned brutality against the Black people embedded sorrow, anger and trauma into our community,” Mann said. “We will fight, shout, advocate, repost and protest until members of law enforcement are held responsible for their actions.”

Mann added that BAS was built to give people a voice and demand change for the Black community, especially against police brutality.

“The Black Action Society is a prime example of what happens when young adults use their voice to demand the power they’ve been oppressed of. We have the power today, we have a voice,” Mann said. “BAS is deeply concerned with the racial profiling and the toleration of murderous methods used by the police. It is our duty to advocate, and it’s up to us to make sure that those who are unheard, that their stories are told.”

Other students spoke at the demonstration as well. Devon, who asked to be referred to only by their first name to protect their identity, said there are many victims of police brutality, along with Rogers, who should have justice.

“We will continue to talk about Jim Rogers and all victims of police brutality in this City until we see the justice that we deserve,” Devon said. “We are going to take back our streets. We did it in East Liberty, a community that has been commercialized and taken over by the state, and we’re going to do it today in Downtown Pittsburgh.”

After Rogers died of cardiac arrest, the county police started an investigation. Witnesses claimed Rogers did not receive any medical care in the 20 minutes after he was tased. Rogers’ family released a list of demands, which includes releasing the names of the responding officers who participated in the arrest, the names of the medics and the unedited body camera footage from the Pittsburgh police department.

Imani, a senior at Robert Morris University studying criminal justice, also spoke at the protest and said she did not feel comfortable sharing her last name. She said she supports the demands from Rogers’ family, and said police brutality will continue being an issue if people do not recognize its impact on the Black community daily. She referenced George Floyd’s murder, which sparked weeks of large-scale protests across the country in the summer of 2020.

“With everything that happened last year, with everyone rallying for George Floyd and Breonna Taylor, it needs to keep going. It’s not a trend, it’s our lives,” Imani said. “Just because it’s not on your timeline, your feed, it doesn’t mean it doesn’t happen. It happens every day.”

She also raised specific concerns about police brutality that Black people endure in Pittsburgh by sharing a personal experience involving her cousin.

“My cousin was killed by his landlord. His name was Leonard Williams Jr. in Washington County,” Imani said. “Everything connects. It’s not just police brutality that Black people suffer from, it’s not just getting shot and killed. It’s racial profiling, economics, political power, housing, employment, health care, the list goes on.”

“It is both frustrating and unacceptable that this investigation has dragged on this long,” Zappala wrote. “I will not permit this type of delay in the future.”

Devon said the demands of the people are not to be optional to elected officials. With Jim Rogers’ death and the lack of information given to the public, Devon said it will not be the last people hear from rallies such as this one.

“We want to raise the demands of the family of Jim Rogers today loud and clear so that they cannot pretend they don’t hear us,” Devon said. “We will not beg for anything. We, the people, will demand what we want. Just as we took this street, we will take our rights we deserve.”