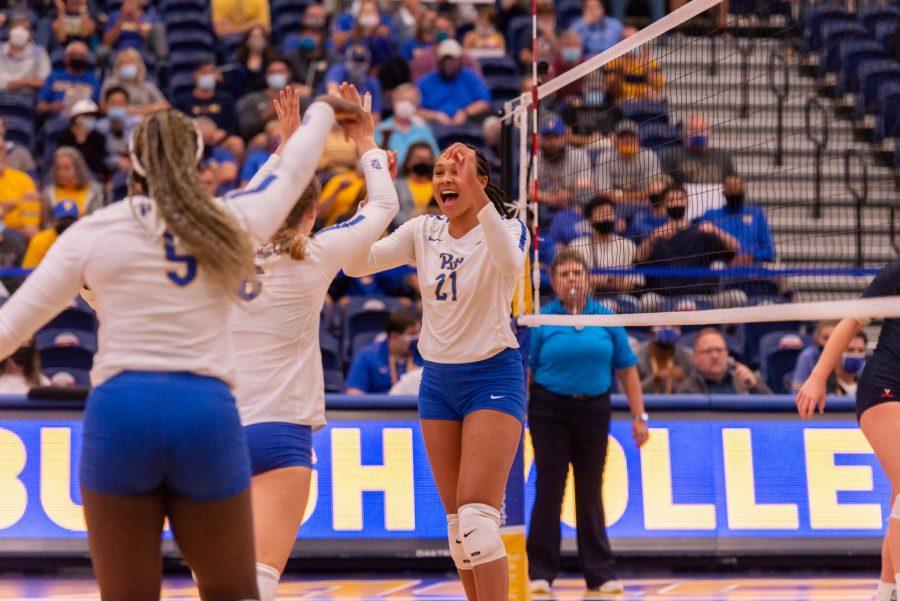 Serena Gray (21) celebrates during the Panthers volleyball game vs. UVA at the Fitzgerald Field House on Sept. 29.

The 2021 NCAA Division I Women’s Volleyball tournament is just around the corner and the No. 3 Panthers (24-2, 13-2 ACC) are still very much in control of their own destiny.

After the conclusion of the regular season, the NCAA uses a rankings committee to determine tournament seedings and the top four ranked teams host one of the four regional rounds. The winner of each region will earn a spot in the tournament semifinals, which is why it is crucial that Pitt stays in the conversation to host one of these regional tournaments.

Unfortunately for Pitt, the ACC championship seems to be out of reach. Although the Panthers haven’t been mathematically eliminated from contention, No. 1 Louisville (24-0, 14-0 ACC) will have the final say in who takes the conference title. They made history last week, becoming the first ACC team in conference history to earn a No. 1 ranking in the AVCA coaches poll.

Assuming that the Cardinals avoid a cataclysmic collapse over their final four games of the regular season, they will most likely win the ACC regular season title and hold their No. 1 ranking going into the NCAA Tournament. Even with a potential loss on the road against Pitt, one defeat shouldn’t mar their reputation in the eyes of the rankings committee.

The most realistic goal for the Panthers at this point would be to host an NCAA regional tournament. With just three games remaining on their schedule, they’ve put themselves in an outstanding position to finish the season strong and lock themselves into the top four.

Here are each of the hypothetical scenarios the Panthers could experience over the next two weeks.

While unlikely, losing out isn’t impossible — two of the Panther’s final three games are against Georgia Tech and Louisville. Both teams have already dealt Pitt a loss this year and each will be looking to solidify their resume with the committee over the next two weeks.

Luckily for the Panthers, they will also face Clemson (12-15, 3-12 ACC), who they dismantled with ease earlier this year. Pitt has managed to avoid any embarrassing upsets this season but with the pressure on, no game against an ACC opponent will be without drama.

In the event that Pitt does drop all three games, they certainly won’t miss the tournament. But they’ll most likely drop towards the tail end of the committee’s top-10 rankings.

Surprisingly, a win against Clemson then two losses to Georgia Tech and Louisville would still leave the Panthers in a position to host a regional. Each of their losses would come to teams ranked in the top 15, and only four of the other top-10 teams have fewer than four losses.

Realistically, a one-loss BYU team or a three-loss Big Ten Champion Wisconsin are the only teams that could knock a four-loss Pitt team out of the top four. But each of those two teams are on the outside looking in, as BYU’s one loss came to Pitt earlier this season and the Badgers have a very tough schedule to end the season.

Another thing working in Pitt’s favor is their Ratings Performance Index ranking. The ranking takes both performance and strength of schedule into account and has adored not only Pitt, but the entire ACC all season. Pitt held the No. 1 spot in the rankings for much of the season and only just dropped to No. 2 behind Louisville. Georgia Tech finds itself at No. 6 while both Florida State and Miami are ranked in the top 15.

The committee in previous years has relied heavily on the RPI rankings in their decision-making. If they continue to do so, the committee will favor Pitt over both BYU and Wisconsin, even with four losses.

Two wins and one loss to either Georgia Tech or Louisville would all but seal Pitt’s bid to host a regional tournament. Three losses — considering how tough their schedule is — should keep them in the top four, possibly moving up to the No. 3 or No. 2 spot.

Another loss likely won’t hurt the Panthers in the RPI rankings. Who the Panthers play after clinching a top four position doesn’t make much of a difference — they’ve proven this year they can beat top-10 teams this year. Perhaps the one team outside the top four who would give the Panthers their most challenging test would be conference foe Georgia Tech — who managed to beat Pitt at Fitzgerald Field House earlier this year.

On paper, there aren’t many ways where a three-loss Pitt team wouldn’t host a regional, but at the end of the day, BYU and Wisconsin can still make a strong case for the third and fourth spots.

Overcoming its demons and taking wins over both Georgia Tech and Louisville to end the season might just put Pitt in the conversation for the No. 1 national ranking.

With only two losses in a season including a number of wins over ranked teams, the committee would have no room to exclude the Panthers from a top four spot. They would even have a strong case to take the No. 2 spot from Texas on merit, as the Longhorn’s sole loss came at the hands of Baylor, who Pitt defeated earlier in the season.

Dethroning Louisville is unlikely if its only loss comes to the Panthers on Nov. 24 — but it is a very real possibility that a win would push the Panthers back into the No. 1 spot in the RPI rankings, forcing the committee to make some very tough decisions about who should take the No. 1 tournament ranking.

Prediction | Pitt finishes the year with three total losses and solidifies No. 4 seed in the tournament

With wins against Clemson and Georgia Tech and a loss to Louisville down the stretch, the Panthers will score favorably enough with the tournament rankings committee to host their region as the four seed nationally.

Wisconsin still looks poised to win the Big 10 and if they do so, will take the No. 3 seed from the Panthers.
Even if BYU remains at one loss for the remainder of the season, their RPI ranking and resume just won’t be enough to justify them being in the top four — especially not over a Pitt team who already beat them handily earlier this season.

Pitt will look toward veteran leadership to guide them in the final three games of the year. Players like graduate student outside hitter Kayla Lund, and fifth-year senior right side hitter Chinaza Ndee have already performed on the national stage for the Panthers and need to use their experience to keep the team on the right foot going into the tourney.
Anything can happen this late in the year, but the Panthers have certainly put themselves in a favorable position to do damage at the national level this postseason.

The Panthers’ next game will take place at Georgia Tech on Friday and will air on ACC Network. The NCAA volleyball tournament selection show is on Nov. 28 and will air on ESPNU.