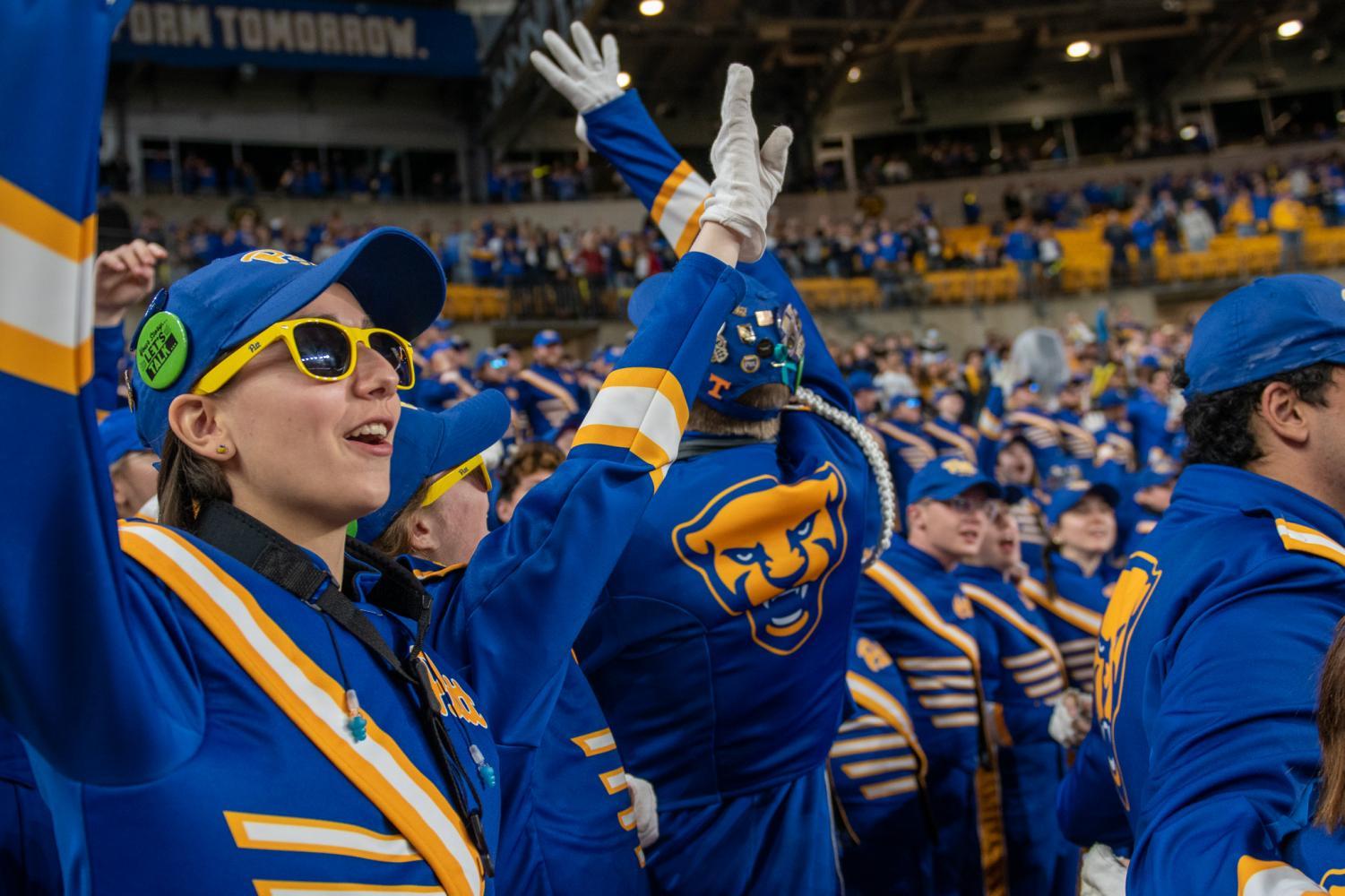 A member of Pitt band cheers in anticipation of “Sweet Caroline” during the Pitt vs. UNC game last Thursday. (Pamela Smith | Visual Editor)

A member of Pitt band cheers in anticipation of “Sweet Caroline” during the Pitt vs. UNC game last Thursday.

‘We all work together’: Behind the scenes with Pitt band

Follow the Pitt band during the Pitt vs. UNC football game on Nov. 11.

Pitt’s Varsity Marching Band, under the direction of Brad Townsend, consists of more than 300 instrumentalists, color guard members and Golden Girls — the majorette corps. They perform at all Pitt football home games and bowl games, as well as one or two away games per regular season.

Road to ACC Champs: Complete coverage of the historic season

Kayleigh Matthews, a senior nursing major who plays the piccolo, said she embraces both the joys and challenges of performing at Heinz Field.

“Every week at practice, we’re learning something new, which is exciting, but it can be challenging at times,” Matthews said. “Especially because there’s a lot of moving parts, but we all work together. And you know, it’s important that out of 300 people, everyone knows what they’re doing and then it looks great on the field.”

Game day for band members starts hours before arriving at Heinz Field. Before the Pitt vs. UNC football game on Nov. 11, Pitt band rehearsal started in the afternoon at the Sports Dome. A few solid practice hours later, the entire ensemble departed for Heinz Field. The band then moved to the ampitheatre, called the Panther Prowl, to prepare for their pregame performance.

Pitt band then marched down West General Robinson Street and Art Rooney Avenue into Heinz Field, which is called the “March to Victory.” Before it filled with music, the air carried the laughter and conversations of many Pitt Band members.

Melina Hudson, a senior environmental engineering major who plays the saxophone, said there is a strong sense of community fostered by Pitt band, across sections and years.

In the basement hallways of Heinz Field, Pitt band prepared to run onto the field and perform their pregame show about 20 minutes before kickoff. Matthews said this is one of the most pivotal moments for the band.

“Everyone really loves running out of the tunnels. We call it running out of the hole,” Matthews said. “Because we get our own smoke and you know, they play the hype video and then the drumline goes out there and performs and it really gets the student section hype.”

The band then retreated from the field to the stands, where reserved seats and some snacks awaited. Jill Lucchetti, a senior biology major, said playing in the stands is “always fun.”

“Because once we score, it’s like, the play’s done, you know, we did it. We played the fight song, can’t take it away from us now — even though they do sometimes,” Lucchetti said.

The fun did not stop after the band’s Veteran’s Day themed halftime performance. Hudson said the game day experience is one of her favorite band memories.

“Honestly, nights like tonight are my favorite memories when we get to run out of the tunnel and just be together and let the rest of the world fade away while we do music,” Hudson said.