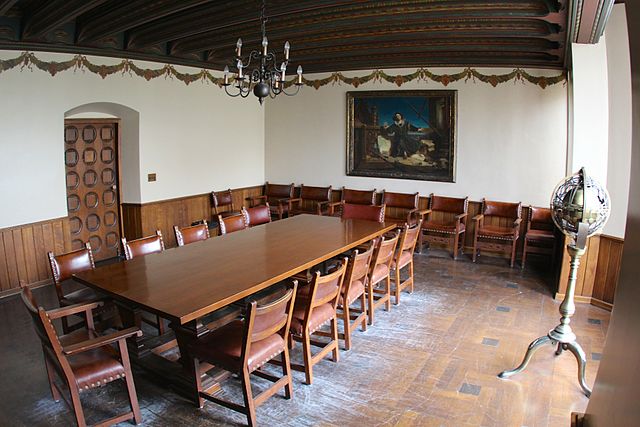 The Polish Nationality Room in the Cathedral of Learning.

Pierogies, paper cuttings and polkas are only a small portion of Polish culture. To learn more about Polish heritage, students are invited to virtually attend Polishfest this week.

The Nationality Rooms and Intercultural Exchange Programs celebrate the 39th anniversary of the Polishfest with “Polishfest 2021: Keeping Our Traditions Alive In A World Of Change.” The events, which celebrate Polish, Lithuanian and Carpatho-Rusyn traditions, are available for free on the Nationality Rooms website from Nov. 14 through Nov. 21. Contributors to the online format include members of the Polish committee, the Carpatho-Rusyn society and the Lithuanian committee.

Polishfest 2021 is structured in a way which allows viewers to interact with video presentations of their choice. These presentations feature a variety of cultural traditions including cooking and folk art, as well as historical and religious offerings.

This year’s Polishfest will look different compared to last year’s PowerPoints on Polish culture. The videos take the viewer to a variety of settings such as churches, kitchens, shrines and other various backgrounds, including the Polish nationality room.

Participants can view presentations and click on additional links to explore web pages detailing Polish culture. The bottom of the festival page additionally shares links for shops where participants can buy Polish baked goods and gifts from businesses such as S&D Deli and Krakus Polish Deli & Bakery.

Lawrence Kozlowski, director of Polishfest, said the event started 39 years ago when a group of Polish-Americans sought to preserve their culture.

“We want to get everyone together in a place to celebrate our heritage one Sunday of the year,” Kozlowski said. “This Polishfest is a way of reconnecting with our past and looking at it in the present day, and it’s going to be a doorway to our future to keep these things alive.”

Kozlowski said there are several appeals of the online format, such as that participants can pick and choose what videos they want to interact with.

“All those things that we say that make us Polish — whether it’s showing how to make a polish paczki or polish donut or paper cutting,” Kozlowski said. “Presentations will be put together in a virtual kind of way, and what’s exciting about this virtual presentation is that you don’t have to be in Pittsburgh to come to the Polish festival, you can share that Polishfest online.”

Kati Csoman, director of Nationality Rooms and Intercultural Exchange Programs, said the event is a celebration of heritage. She said despite this weeklong launch, the Polishfest web page will continue to be accessible after the festival.

“The idea is that it’s not just people of Polish heritage who attend, but people who may be interested in Poland and Polish culture,” Csoman said. “Following the event, this whole event will be archived on the Nationality rooms cultural exchange program’s new website, so people can go back and look it up.”

“I think it’s such an easy opportunity to be able to engage with something that is culturally enriching,” Csoman said. “It’s kind of fun to kind of be invited into, for example, the home of the Lithuanian women who are preparing the kugelis.”

Leszek Wajler, a member of the Polish Committee, said the Polishfest still has significant relevance for students, especially when it comes to education and exposing people to more cultural diversity.

“Each of the nationality rooms represents the people that came to the United States, their history, their culture’s history, their heritage,” Wajler said. “Don’t go and just see one room. Go and see as many as you can, just so you can appreciate the diversity.”

Csoman said events such as Polishfest are easy ways to engage with culture, and she encourages the Pittsburgh community to participate in this virtual event as much as they can, especially because of its convenience.

“If you’re going to binge-watch a Netflix series, why not binge-watch the Polishfest?” Csoman said. “It’s fun and I think it’s really interesting, both culturally and historically. I think there’s something for everyone.”