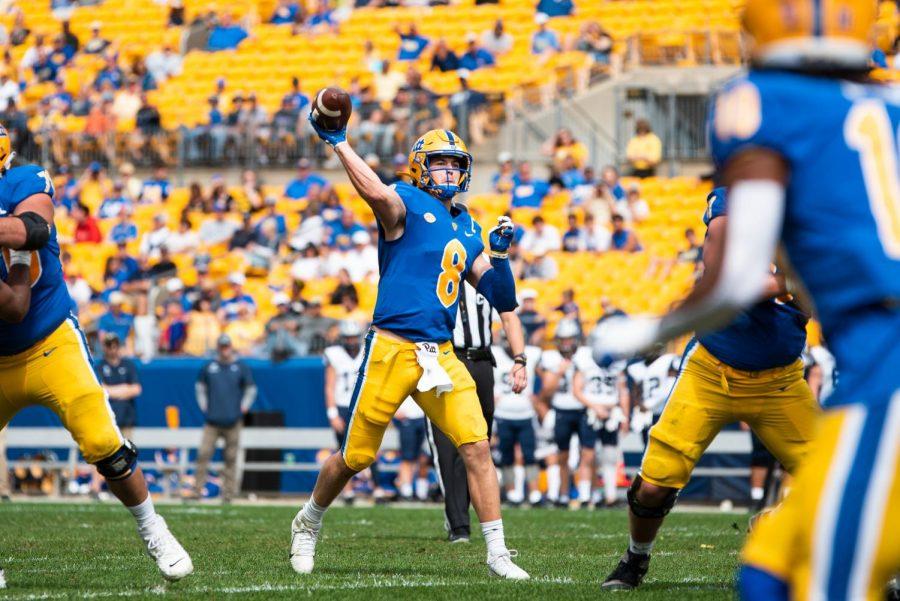 Kenny Pickett (8) throws the ball during the Pitt vs. UNH game on Sept. 25 at Heinz Field.

When walking into Pitt football’s practice facility on the South Side, the number of and the notoriety of the awards dotting the walls is staggering — a Heisman trophy, a Biletnikoff award, national championship trophies and a 2018 Coastal Division title trophy.

But one award has eluded the Pitt football program — an ACC Championship.

The Panthers came close before, but have never been able to sit upon the ACC throne since joining the conference in 2011. The closest the program has ever come to claiming a conference title was in 2018 when the Panthers fell to the Clemson Tigers 42-10. While much of the 2018 team has since moved on to the NFL or graduated, a group of “super seniors” from that year’s team remain and are looking to seize the next opportunity.

The long list is a product of the NCAA allotting these players an extra year of eligibility to play football, due to the COVID-19 pandemic. There was nothing forcing these players to come back, with most already graduating with an undergraduate degree. But the group wasn’t done donning the Pitt script on Saturdays just yet.

Tipton, who is in his seventh year with Pitt, said earlier this year that he’s trying to soak up every last second because once his career at Pitt is over, his football career is over as well.

“One sport that’s like death is football,” Tipton said before the season. “What I mean by that is the day you pick up that football, you have a death certificate when you stop playing that game … football is the one sport, once you put it down, it’s over. So, as long as I’m able and these legs keep running, I’m trying to play … I just love the game, the game has been my best friend.”

Pitt’s football team has preached a mentality of “we not me” this season, instilling a very close-knit unit. The mantra put the seniors in a position of leadership, and they seized this opportunity. Narduzzi said the fact that the players, Pickett in particular, lead the team is what sets this year’s team apart from the past.

“It comes down to the senior leadership,” Narduzzi said. “You’re only as good as your team. If you’re a player-led team, you have a chance with Kenny. I hope all our young guys learn from Kenny Pickett.”

Redshirt senior tight end Lucas Krull, who previously played for Florida before transferring to Pitt in 2020, said the group of players is the closest he’s ever been to.

“One hundred percent,” Krull said when asked if this was the closest he’s ever felt to his teammates. “The pride we have for each other and this University — it’s powerful … we love it and we love each other and we go out there and we do it for one another.”

Pickett, who might be the first quarterback selected in the NFL Draft, headlines the group of seniors. The fifth year has grown before Pitt fans’ eyes since making his debut in 2017.

But Pickett’s return to the Panthers was far from a sure thing. According to Pickett, he wasn’t sure about entering his name to the NFL Draft and coming back for another run at a championship. After weighing the pros and cons of leaving, he decided it was best for him to stay in Pittsburgh for another year.

Pitt was never supposed to be in the position it is now, according to oddsmakers and many analysts before the season. Even with Pickett coming back, the Panthers were the third and fourth option for many to win the Coastal, with UNC, Miami and Virginia Tech in front of them. But Pickett didn’t let this stop him from believing in his team — even all the way back in May, when the Panthers were nothing more than an afterthought to most.

“A championship,” Pickett said in May when asked what his goal was in his final season. “By far that’s the biggest thing. I would love to bring a championship back to this City and back to this school — that would be a great way to end my legacy and go out on top ––  with a championship. We’re working towards that everyday.”

Pitt has now played itself into first place of the Coastal Division, and controls its own destiny to book a trip to Charlotte for the Dec. 4 conference championship game. While Pickett without a doubt receives the most attention among the group of super seniors, he’s not alone in elevating this team back into the national conversation.

Like Krull, Petrishen wasn’t on the roster when Pitt fell to Clemson three years ago. The former safety was primarily a special teams player for the 2018 Penn State Nittany Lions. Since transferring in 2019, Petrishen has changed position to linebacker and set out to prove to himself that he could compete at a high level.

In his seventh year of college football, Petrishen is tied for No. 3 on the team in total tackles with 51, and leads the team in interceptions with three. En route to proving himself right, Petrishen is looking to help his fellow super seniors claim a conference title in their final year on the gridiron. While doing all of this, he’s embraced the team’s mantra of “we not me.”

“To me, [we not me] embodies our whole team as a group this year,” Petrishen said. “We’ve gotta focus on doing it as a group.”

Alongside Petrishen on the defensive side of the ball, Camp, Campbell and Pine have all played large and impactful roles. The experience and leadership has shone through a couple of times this season. After two of the team’s most emotional wins this season, the Panthers faltered the next week, suffering two upset losses at home.

But the week after a loss, the Panthers have bounced back and won, in resounding fashion, in both instances. Petrishen was sure to mention that the seniors will make sure that, from here on out, there will be no big-game hangover from one week to the next.

“It’s really an emotional rollercoaster,” Petrishen said after Miami upset the Panthers. “Hopefully it won’t allow us to get too far ahead of ourselves next time we have a big win — because we will have another big win this season.”

While this season means something to every player involved, now is the last chance for the seniors to cement their legacy. Tipton said in his and many other players’ final year, they want to be remembered as the team that brought home a championship.

“As for the seniors, everybody feels the same way,” Tipton said. “It’s the last go-around, so how do you want to be remembered? Nobody remembers the 5-7 team. Nobody remembers the 7-6 or the 8-5 [team] … It’s about winning a championship and making people understand that we’re no longer a team that you can just come in and feel like, ‘Oh, they’re just a tough team.’ No, you better be prepared because we’re coming.”

Pitt’s next opportunity to take another step towards a championship comes this Saturday as the Virginia Cavaliers come to Pittsburgh. With a win, the Panthers will officially clinch the division and book a trip to Charlotte. The game with the Cavaliers will kick off at 3:30 p.m. and air on ESPN2.