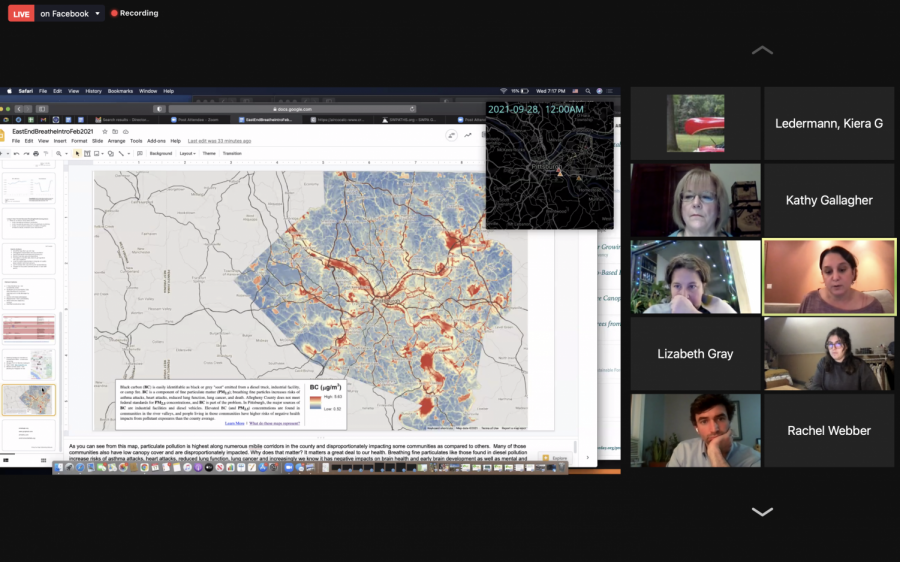 Big changes may be coming for Oakland car owners, according to Andrew Dash, director of City Planning. Dash said several aspects of the Residential Permit Parking program will change, such as parking grace periods and visitor parking passes.

The Oakland Planning and Development Corp. held a public meeting Wednesday on Zoom to discuss pending changes to the Residential Permit Parking program, as well as rental registry legislation updates and air quality monitoring efforts in and around Oakland.

The Department of City Planning is currently responsible for the creation and expansion of areas for the parking program, but the City is interested in transferring this to the Pittsburgh Parking Authority, which already permits and enforces RPP areas. Because this change requires a change to the City code, officials are determining other code changes they will make at the same time.

One proposed code change will create an option for communities to become hybrid parking areas. This would mean that instead of providing a grace period — or allowing people to park for one or two hours for free — people without permits will have to pay to park.

“We did limit that to 12 days a month that those can be used trying to both balance the needs of residents who have visitors that are frequent, but at the same time trying to limit some of the exploitation that we saw with the visitor passes,” Dash said.

According to Dash, another proposed change will include the creation of a series of new permits for non-residents such as medical caretakers, contractors working on long-term projects, in-home child care providers and landlords.

When Dash opened the floor to questions, one resident said she was concerned that landlord permits would cause problems for residents.

“We just have so many landlords,” the resident said. “My poor neighbor who lives at 300 Ophelia St. will never be able to park anywhere near her house. It’s just impossible. I don’t see how you can give any justification for that at all.”

Dash responded by stating that the City included landlord permits to support landlords who are working on properties, which “does tend to typically happen within the hours of an RPP district.” Dash said the concern was a “difference of opinion” that will ultimately be up to the City Council.

“Ultimately there’s been a lot of discussion, a lot of feedback has been given,” Dash said. “I think City Council will ultimately be the one to determine, you know, whether or not that proposal comes through as a part of ultimately what gets approved.”

Bruce Kraus, a City Council member who represents part of Oakland, gave updates on the rental registry legislation which City Council first introduced in 2014. The legislation would allow the City to identify Pittsburgh’s rental properties and put them on an inspection schedule, to ensure renters have safe living conditions.

According to Kraus, the legislation is currently being considered by the Mayor’s office and the fee structure will not be passed until Dec. 15.

“If adjustments need to be made, fees can be adjusted without having to tamper with the legislation in any way but that cannot be voted till Dec. 15,” Kraus said. “So I don’t expect anything to be in place in terms of application or enforcement until the end of the year.”

After updates from Kraus and Dash, Christine Graziano of the Breathe Project  — a coalition of environmental advocates, academics and public health professionals working to improve air quality in Pittsburgh — said the coalition has been working with the Create Lab at Carnegie Mellon to examine air quality in Allegheny County.

One data visualization the lab created shows black carbon particle concentrations and hot spots throughout Allegheny County. Graziano said awareness of black carbon is important due to its impacts on people’s health.

“Particularly in the Greater Pittsburgh area, you can see that some communities are disproportionately affected by these black carbon concentrations, which have serious health implications,” Graziano said. “Those fine particles really lodge in the tissues of our body, particularly impacting lung function and increasingly the data is showing that it has an impact on brain development in young children.”

According to Graziano, the lab is also examining air quality concerns surrounding the asphalt and cement plant near the Birmingham Bridge after receiving “numerous complaints” about odor coming from the site. The lab is using data collected from samples the CMU mobile lab took near the plant, air quality monitors installed throughout the community and qualitative data submitted by ground observers who regularly utilize the bike path near the plant.

To close the meeting, Andrea Boykowycz, assistant director of OPDC, announced the organization will partner with PittServes and TreeVitalize, an application-based community tree planting program, to plant new trees this Saturday at 9 a.m. on Parkview Avenue near Boulevard of the Allies. Participants must register beforehand, Boykowycz said.

Boykowycz also encouraged community members to join the next OPDC meeting on Nov. 29 that serves as the official Development Activities Meeting for zoning legislation to enable local developer Walnut Capital’s redevelopment plan for Oakland, ahead of a Planning Commission hearing on the legislation. She encouraged community members to share their opinions about the bill, which would rezone 17 acres in Central Oakland as part of the Oakland Crossings plan.

“This is an opportunity for the public to ask questions about the bill and to provide feedback about it and its content and its process all of which will then be delivered to the planning commission for their hearing in January,” Boykowycz said.