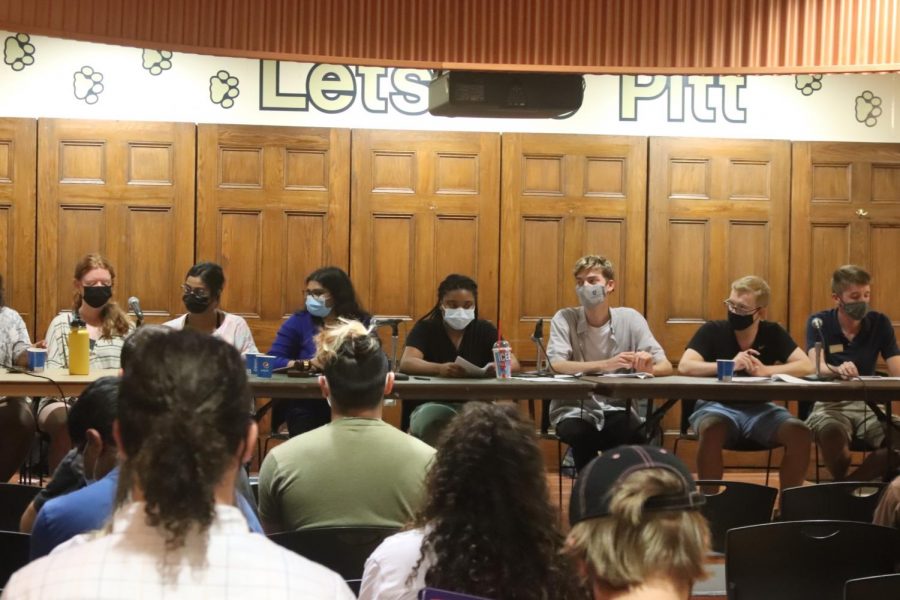 The Student Government Board meeting on Sept. 14 where Brennan Conway, far right, announced his outside bank accounts plan.

What has long been a dream for student organizations — more self-service management of their finances — may become reality in fall 2022 if all goes according to Student Government Board’s plan.

Brennan Conway, a member of SGB, said the board is working hard with stakeholders from across the University to set up private bank accounts for student organizations by next fall. He said while SGB originally planned for a pilot program to be introduced this semester, it won’t be implemented until the spring.

SGB was set to launch the pilot program at the beginning of this fall semester, but because of what Conway calls “legal and taxation issues,” SORC gradually pushed back the start date to spring 2022. Conway hopes to launch the official program during the fall 2022 semester.

Conway said SORC requested he redraft parts of his proposal in late September. According to Conway, SORC wants to ensure that donations made to Pitt student organizations are tax-deductible.

“They wanted those donations to count for the donors so they can get the tax credit,” Conway said. “But, also because when the University has more donations, that improves their alumni engagement metrics which helps to raise the U.S. News ranking. So, we just had to make sure that it worked on all fronts.”

Conway said some donations made to student organizations have a specific spending intent, such as for travel and scholarships. Students cannot spend donor money on anything outside of the specific intent and must provide SORC with documentation of their spending. With personal PNC bank accounts, proving spending intent is more difficult, as SORC cannot access the account and keep track of transactions.

Conway currently has two proposals he believes will remedy this issue and he’s currently working on getting one of them approved by SORC — SORC will hold donor money in a gift account or a University SORC bank account to transfer into student PNC bank accounts.

“They’re going to be reviewing it next week so if everything looks good it could [get approved] next week,” Conway said. “If we need to reconvene, we’ll work a few things out — but we’re really close and we’ve been making a lot of good progress.”

Conway decided to spearhead this program after several student organization business managers approached him with their financial frustrations during his campaign.

“I think the biggest frustrations are just with the inefficiency and how it takes a while, and also the inability to use things like a debit card and a checkbook, or certain mobile payment platforms,” Conway said. “Also, student groups feel that, money they raise themselves, they should be able to manage however they want — which I think is certainly reasonable.”

“Managing 500 plus student organization accounts and thousands of financial transactions per fiscal year certainly has its challenges,” Miller said.

Though she is excited for the pending program, Miller wants to ensure a smooth transition for students into the responsibility of financial independence.

“Our hope is that a potential move to outside accounts will allow students more flexibility in their spending and timelines,” Miller said. “However, with it will also come greater responsibility on the behalf of the students to manage their accounts with minimal University assistance.”

“I know things like this can get challenging to pass through administration, but I’m excited to see it up and running,” Weir, a senior mathematics and economics major, said.

Conway said this idea “has been on the table for SGB for a long time” and that Ben King, a former high ranking SGB official, met once with SORC to discuss a similar program. Conway said SORC supports the program’s current iteration.

“We talked to the people at SORC and they were supportive as well because there are only a handful of people who work in that office and they don’t want to have to spend all of their time dealing with transactions — so, it’s really a win-win situation.” Conway said.

But SORC had a condition for Conway before they agreed to his proposal — running a pilot program.

“Launching this pilot program was one of the conditions SORC had before actually making this happen,” Conway said. “You can imagine — there are hundreds of student organizations on campus. If we just gave everyone their own bank account right away and didn’t figure out what problems we had beforehand, that could be a challenge.”

George Shiarella, senior computer science major and business manager for the Club Running Team, said although SORC has been “great to [club running] this year,” its system is “honestly a bit convoluted.”

This year, SORC estimated that Shiarella’s outgoing checks at the start of the semester would take eight weeks to process. Shiarella said this was “unreasonable” for his club, but SORC was able to remedy this issue by using a credit card.

“Thankfully SORC has a credit card they can pay over the phone or online with, which is what we have done a few times now,” Shiarella said. “But this makes me wonder why we even have [this system] if it takes so long.”

Madison Danfield, business manager for Pitt’s Habitat for Humanity chapter, said the main reason she registered her club up for the pilot program was because she wants to use mobile payment platforms. She said she looks forward to “efficiency,” “more financial freedom” and “cutting out the middleman” with the pilot program.

Shiarella agreed and said he’s excited about more autonomy and efficiency, as well as the fact that he won’t “have to bother the SORC workers” as much anymore.

Weir said she had no difficulties with SORC in her position as allocations committee chair.

“I find [SORC] to be responsive and helpful, and they do a good job of spending the money that we allocate,” Weir said. “I don’t find SORC to be slow to respond, but I am also serving in a student leadership role and may have a bit more leverage than other students on campus do.”

Danfield said it was “frustrating” to hear that SGB pushed back the pilot implementation date.

“We had really looked forward to utilizing this outside financial account,” Danfield said. “It’s kind of a shame that we can’t use this outside bank account this semester. We’re still restricted by SORC.”

Danfield said she has had no issues with SORC this semester, but added that they have taken “a very, very long time” to reimburse club members in the past. Danfield also said it took SORC “a while” this semester to update her club finances in their system. She added that she believes all these issues “could definitely be mediated if [her club] had a PNC bank account.”

Shiarella said he is not frustrated with the delay — he barely noticed it.

“Honestly, I barely realized that this was a setback, we had never originally gotten a date for the launch so I had been under the assumption that it would start at the beginning of the spring term,” Shiarella said. “When I finally heard from SGB and SORC, I was not surprised. I’m just excited to utilize this program, and I’m not upset as long as it is implemented in time for me to utilize it.”

The details of the pilot program may change before it runs, according to Conway. He said he wants “to streamline the process as much as possible,” but that it’s a work in progress and needs time.

“We have to be deliberative with our process and take our time with things,” Conway said. “I’m just glad that we’re finally making progress with it.”