Pitt shoots the lights out from three, blows out LIU 92-41 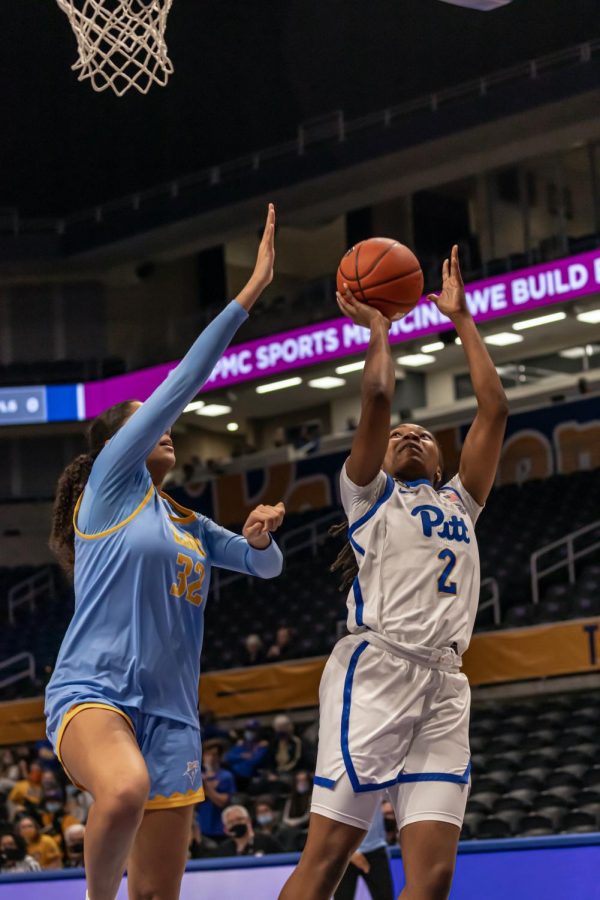 The win puts the Panthers at 3-0 to start the year, the first time the Panthers have done so since the 2016-17 season. This was also the largest margin of victory in a Panther win since they beat the University of New Orleans 90-38 on Nov. 9, 2018.

The Panthers seemingly couldn’t miss from behind the three-point line — shooting 47.4% from beyond the arc. Pitt also shot better from the free-throw line, at 63% against LIU — an improvement on the 52.9% they shot against Lafayette last week. The win inspired confidence in the players and coaches alike, according to head coach Lance White.

“I’m really excited about the win and we showed that we are a good basketball team,” White said.

The Sharks, on the other hand, couldn’t seem to buy a score, shooting just 26.2% from the field and turning the ball over 27 times on the night.

There was a clear gap between the two teams, and the Panthers wasted no time showing that on the court. The Panthers quickly jumped out to a 12-0 lead and would only pull away further for the rest of the first quarter.

Pitt went on to grow its lead to 55-20 to end the first half, but didn’t open up the second half as fast.

Pitt continued to extend its lead, but White said he felt his group let up a bit in that third quarter. The Panthers only outscored the Sharks 16-12 in the third, the lowest-scoring margin of any quarter.

Junior guard Destiny Strother made her first start of the season in the contest. Strother scored 17 points and was locked in from beyond the arc hitting five three-pointers. Strother typically came off the bench for White last year, but she made it clear she was comfortable in either role.

Strother also displayed her versatility, tipping in a missed shot. The junior said it was nice to prove that she could get it done not just shooting but also down low.

“It feels good to be able to provide something else and not only be a shooter,” Strother said.

Strother replaced sophomore guard Taisha Exanor in the starting lineup on Wednesday. White consistently switches up his starting lineups over the course of the season to ensure players who perform in practice get a shot to prove it in a live game scenario.

“I really question our starting lineups a lot because we have great competition in practice,” White said. “We told [the team] they need to prepare a certain way and then you have to produce.”

“I feel like it helps us all out,” Strother said. “In a game, nobody is just going to go easy on us so we compete with each other, we go hard at each other to ready for games.”

Junior guard Dayshanette Harris also saw her first action of the season last night. Although she was last year’s starting point guard, she only played 10 minutes against the Sharks due to a lingering injury. In her short time on the floor, Harris scored six points and also managed to pull down six rebounds.

The lead opened up opportunities for other Panthers to have big games off the bench. Sophomore Sandra Clesca put up 13 points and five assists coming off the bench. Exanor played a big role on the boards, leading the team in rebounds with 11 despite not starting this game.

“It’s really fun to see the contributions from a lot of different players,” White said. “We’ve talked so much this year about not having a huge drop-off when we go to our bench. We can play a lot of players and sustain.”

But the Panthers continued to have trouble holding onto the ball, ending the game with 23 turnovers. White said he felt that the Panthers were commonly trying to make something out of nothing.

Despite the Panthers’ guard depth, turnovers continued to pile up. Hayford and Exanor, both of whom are starters or have been starters, each turned the ball over five times.

The Panthers now look ahead to their City Game matchup with Duquesne on Saturday at 8 p.m. at the UPMC Cooper Fieldhouse. The Panthers will be looking to avenge their defeat from 2019 and take back the Pittsburgh crown.