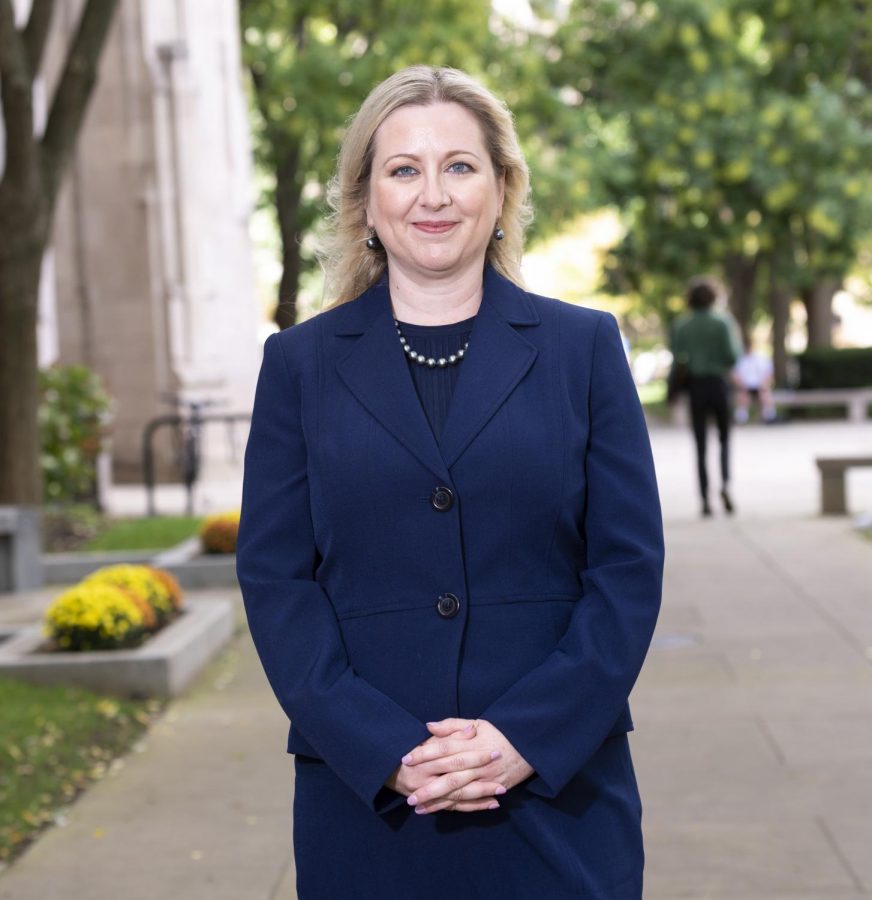 Nicola Foote, the new Honors College dean, outside of the Cathedral of Learning.

“I hope students know how important it is that they’re part of this wonderful and inclusive community where they are with incredibly talented and high achieving students,” Foote said.

Nicola Foote began as the new Honors College dean on July 1, after former acting dean Audrey Murrell resigned in February. Prior to joining Pitt, Foote served as the vice dean of the Honors College at Arizona State University, where she oversaw 170 honors-only faculty as well as more than 2,000 affiliated faculty. Foote said she plans to bring new programs and goals to honors students this year, such as more international programs.

Foote said she came to Pitt because she was excited by the opportunities it presented.

“I could not resist this opportunity,” Foote said. “I mean, Pittsburgh has just an extraordinary reputation and I felt like the opportunity in the Honors College was so unique and exciting because it is one of the oldest honors colleges in the nation and it gives me a very rare opportunity to take something historic, that’s meaningful to so many people, and build and innovate upon that.”

One project Foote said she is working on is incorporating Pitt families into University events, such as creating welcome sessions and family programs.

“I have been really working to better include the families of students into the University community,” Foote said. “So this was the first year that we held a family welcome session as part of our new student orientation so that families, partners and friends of the students could learn more about the student programs and we’ve been working to create a family advisory council so that families can provide their input.”

According to Foote, she hopes to enhance the quality of Pitt’s education and implement programs to better engage students, so students can participate in the most impactful types of academic experiences.

Foote also said she hopes to launch new programs, such as partnerships with other institutions.

“We will be launching the City Honors program where honors students will be able to immerse themselves fully in the culture of Pittsburgh,” Foote said. “We also hope to create more international programs by developing new partnerships with institutions in the Caribbean and Latin America, as well as in the United Kingdom, to create enhanced opportunities for student exchanges, as well as for hosting guest faculty from overseas.”

According to Foote, she has faced many challenges and hopes to make improvements soon, including making the Honors College’s space in the Cathedral of Learning more suited to its needs.

“I think with any job, part of understanding the role is to see where the challenges are,” Foote said. “We’re in the Cathedral of Learning, which is just an iconic space, but because it is an old historic building, we have some, some enhancements we can keep making as far as technology capacity, and just having more space to work in.”

Foote also said one of the biggest challenges the UHC faces currently is the need for more staff.

“I think our biggest challenge in the Honors College is that we have an amazing staff, but we have fewer staff than would be optimal for the number of students that we have,” Foote said.  “We’re really working to bring on some more people, but that’s of course, a challenge that requires resources and we have to be really intentional about how we do this.”

Despite the challenges, Foote said there are plenty of rewarding aspects of the job, including interacting with the students.

“I think the opportunity to interact with truly incredible students has been rewarding,” Foote said.  “Every time I meet with students, whether it’s individually or in a group, it is breathtaking to see the extraordinary things that our students do.”

She also said her door is always open for students to stop by and say hello.

“I want them to come and see me whenever they want in my office on the 36th floor of the Cathedral,” Foote said. “My door is always open and I love it when people come up to see me, even if it’s just to say hi.”