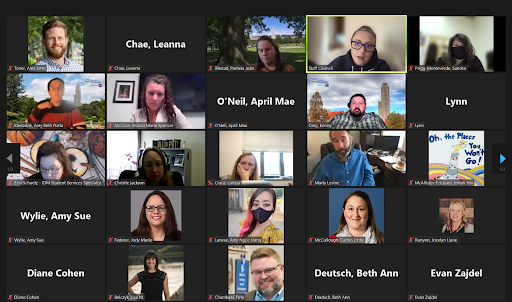 Pitt’s Staff Council during its Wednesday meeting to discuss Flex Work and a possible new project with The Pitt Pantry.

After fully remote classes last year, Kenny Doty said staff and students recognized the benefits of having a flexible work environment, and added that he felt that Staff Council’s work around the flex policy has been successful.

“[Chancellor Patrick Gallagher] was appreciative of Staff Council’s effort around flex work and said, ultimately, it was a great success that some of that was suboptimal,” Doty, the body’s executive vice president, said.

Pitt’s Staff Council spent its Wednesday afternoon meeting discussing a new hybrid model called Flex Work, as well as a possible new project with The Pitt Pantry and a push to collaborate with Pitt’s regional campuses.

The council first voted on if its future meetings should be held in person, virtually or both. The council preferred either using a hybrid model or staying virtual, which Doty said could be possible and effective if the details were worked out thoroughly.

“Hybrid meetings have a lot of challenges, but we can do them effectively,” Doty said, “We just need to be conscious of both in-person and remote people.”

Alex Toner, assistant director of community engagement, said the possibility of going in person — after only holding virtual meetings so far — gives the council the ability to function to their best ability.

“I think that in the past two years, we may have forgotten how much energy and enthusiasm are generated through meeting in person,” Toner said. “The ability to really debate and dig into some critical issues that staff face … are sort of elevated when we are able to meet in person and have those interactions.”

Along with discussing a flexible work model, Doty said the council’s officers met with Chancellor Patrick Gallagher and Dave DeJong, the senior vice chancellor of operations. Both Gallagher and DeJong emphasized how Flex Work — a new interim work policy — could be improved from listening to students’ feedback from their remote experiences. The Flex Work agreement provides the opportunity for all University employees to work remotely from home, outside of normal working hours or a combination of both.

The council also discussed its neutrality towards the recent faculty unionization vote. Pitt’s faculty voted to form a union last month with the United Steelworkers’ Academic Workers Association after initially launching a unionization campaign in 2016.

“Staff Council will take a neutral stance as an organization,” Doty said. “I encourage all staff to educate themselves and make an informed decision on where to, where to stand on that. We also are looking into ways to make some sort of impartial education available to everyone.”

Samantha Young, the staff life committee chair, discussed high food prices that she said has caused some staff and students to experience food insecurity. Young said the council should work with the Pitt Pantry as a service project to support staff and students.

“The service project, I was thinking, was possibly doing something with the campus food pantry, because I’m hearing that, while there are students that are food insecure, there is also staff that is food insecure,” Young said.

The council also discussed Pitt’s regional campuses and how other campuses may be experiencing similar problems to the Oakland campus, such as job creep, lack of staff and little to no cross-training — the practice of teaching employees different roles outside of their normal responsibilities.

Amy Kleebank, a University art director, said she mentioned the idea of the regional campuses working together when meeting with other staff in Harrisburg.

“I spoke about our shared governance and how, when we go to Harrisburg, it’s important for all of us to take part in,” Kleebank said. “I even spoke about newsletters … or anything that they might have that we all share together and what we can work on together.”

Toner said the creation of more roles, such as executive positions, implemented into the Staff Council structure could open many opportunities for the regional branch campuses to get involved in the planning process.

“Perhaps this is really, truly the time when we structurally create the components of Staff Council where [the regional branches] can be more involved,” Toner said. “Whether it’s really, truly identifying people on campus, on those campuses who can then be blended into our committees and these meetings as well, or creating a new executive position.”