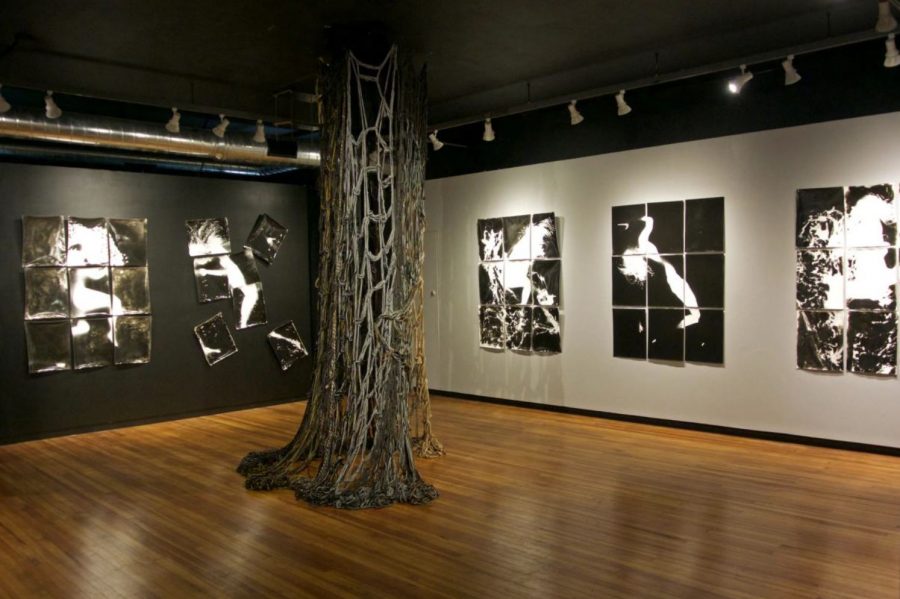 Installation of Hernease Davis’ “A Womb of My Own (Mistakes Were Made in Development)” at Visual Studies Workshop in Rochester, New York, in 2018.

A bright black and white photograph showing the outline of a woman curled to her side, titled “A Womb of My Own (Mistakes Were Made in Development),” lit up audience members’ Zoom screens on Nov. 18 in a presentation from artist Hernease Davis.

During the presentation, Davis, a Brooklyn-based multimedia artist, displayed her work to around 20 attendees. It was part of Pitt Studio Arts Department’s ongoing visiting artist series — a program that presents nationally and internationally recognized artists to students in the Dietrich School of Arts and Sciences. The visiting artists series, which lasts throughout the semester, consists of free public lectures, performances and workshops engaging students across various disciplines within Dietrich.

She began by discussing the “A Womb of My Own (Mistakes Were Made in Development)” series, which she said stems from trauma. She said she developed the pieces in the series to document her recovery from familial conflicts.

She used various mediums to express her emotions, including sound installation, crocheted pillows, blankets and vocal performance. She said the series developed through various ways, but primarily photographs.

“I call them emotional photographs. I started making work in the way that I’m making now in response to some very traumatic familial situations that were going on as a way of coping with something,” Davis said. “And through the years as I’ve found my way through photography, I’ve used it numerous times as a way of coping, letting go.”

Davis demonstrated the various elements of her work through visuals as well as sounds. The exhibit played hums sung by Davis to emphasize her emotions to audience members. She played samples of sound bites from her recent walk-through exhibit to emphasize the interactive feel of her works.

“I would say that my practice as an artist is what I often call an internal empathic process. It’s an ongoing conversation that I have with myself as a tool to deal with the feeling,” Davis said. “In terms of the materials, I incorporate the things that I do on a normal regular basis. The music is an element, the crochet is an element.”

Davis uses sound and performance to create her works. She said she treats the creative process as a healing tool. She is on faculty at the Visual Studies Workshop in Rochester, New York. She’s also a current Visiting Lecturer at the International Center of Photography-Bard Program in Advanced Photographic studies from Bard College where she explores empathy through art practices.

At the lecture, she discussed various elements of her recent exhibition at the Visual Studies Workshop in Rochester such as photograms, sound and crochet. Davis showed photographs of crochet nets as well as multiple photographs of her photograms to demonstrate that her art incorporates everyday elements.

A photogram is a photographic image made without a camera. An object is placed directly onto the surface of a light-sensitive material and then exposed to light, leaving behind a white imprint on a black background. One of Davis’s photograms features the outline of a woman curled to her side while another showed a handprint reaching out.

Davis explained that she laid on the surface of this light-sensitive material for hours to create the visuals seen in her photograms.

“I make these photograms specifically in response to a need. I decide when it’s time to do a photogram because I use the surface as a means of dealing with challenging emotions,” Davis said. “I used it to learn, I used it to get out a lot of anger and rage, I’ve used it to spend time contemplating things I didn’t understand.”

Melissa Catanese, visiting artist committee chair, said the visiting artist series committee, which consists of both faculty and staff, organizes the artists who are featured. She said the group was particularly interested in Davis after the artist’s recent “Recapitulation” exhibit in Pittsburgh at the Silver Eye Center for Photography. “Recapitulation” refers to a musical term that emphasizes the main point.

“Because Hernease’s work was recently exhibited here in Pittsburgh, she was on our minds,” Catanese said. “Her work addresses identity, trauma and self-care through the artistic process. This is a pretty relevant topic for our students these days.”

Catanese said the visiting artist series has always taken place online to allow artists to present their exhibits in an interactive format. She said the virtual event additionally allows for various participants to attend.

“The first visitor of our series was scheduled during lockdown, so we actually only had virtual events thus far,” Catanese said. “The virtual talks have enabled people from all over the globe to attend in addition to the Pittsburgh community, which is really exciting to see.”

Davis said the workshop with Pitt Studio Arts students had been a positive experience. She  mentioned an “insightful” experience she had with Pitt students discussing self-portraits.

“It’s really wonderful to get to know the Pittsburgh community a little bit. This was completely an organic outgrowing. I had an insightful experience yesterday with students where we interrogated self-portraiture during that workshop,” Davis said. “I find that my students really help me to come through with a lot of grounding, examples and also some more concrete ways of explaining things that I’ve been thinking through.”

Caroline Scalf, a first-year computer science major, said she enjoyed the exhibit. Scalf said she is involved within the Pitt Studio Arts community and appreciates the visiting artist program as well as other programs that the department has to offer.

“Regardless of your major, I think everyone should get involved in Pitt Studio Arts somehow. Whether that be through a club or through one of their many events, it’s a great way to become more well-rounded,” Scalf said. “It’s never too late to become invested in art.”