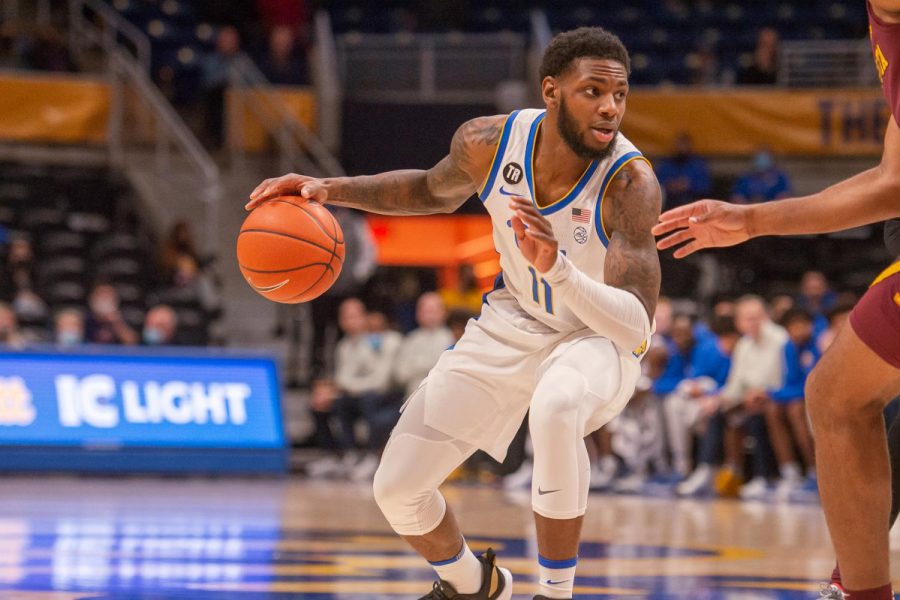 As sophomore guard Femi Odukale’s half-court heave bounced off the right side of the rim and the final buzzer sounded, the crowd at the Petersen Events Center let out a collective groan.

Their team had given them hope — only to crush it slowly as they let what looked like a sure win slip through their fingers.

Pitt men’s basketball, on its heels after a 0-2 week that included double-digit losses to Vanderbilt and UMBC, played its best 40 minutes of basketball against arguably its best opponent, but somehow still managed to suffer what head coach Jeff Capel called a “gut-punch loss.”

With a Power Five opponent on the ropes, Pitt (2-5 overall, 0-0 ACC) kept the door open long enough to let Minnesota (6-0 overall, 0-0 Big 10) mount a delicate but devastating comeback. Down one with 2.4 seconds left, Minnesota senior guard Luke Loewe tipped in a missed layup for the game-winning bucket to steal a 54-53 win for his Gophers against the Panthers.

After the game, senior guard Onyebuchi Ezeakudo said he wasn’t discouraged by the loss and that the team is closer to success than it may appear.

“This game, I think we fought the whole time,” Ezeakudo said. “We just had to close it out, but we didn’t. So we’re right there and that’s the good part of it. We just got to clean up a couple things.”

But it is that very fact that makes this loss — more than any of the four others the Panthers have suffered this season — sting so much. And while that fatal shot will live in the Panthers’ minds for a long time, a much longer stretch of ineffectual play in the closing minutes of the second half primed Pitt for defeat.

The Panthers took an eight-point lead — its largest of the night to that point — by way of an Odukale jumper with 9:59 left to play in the game.

That forced Gophers head coach Ben Johnson to call a timeout. It was exactly what they needed. Johnson told his team to settle in, that they had been in this position before and labeled the remaining minutes as “winning time.”

Following the break, Minnesota sophomore forward Jamison Battle hit consecutive 3-pointers to pull them within two points. He scored a layup 30 seconds later to knot the game at 42.

Pitt had gone in less than a full minute of game time from holding its biggest advantage to tied. It needed an offensive spark and never got it.

Sophomore forward John Hugley, who was in the middle of posting a 25-point, 14-rebound double-double — his third in Pitt’s first seven games — became a focal point for the Gophers’ defense.

They honed in on Hugley down the stretch, packing the paint and forcing other Panthers to make shots that never fell. While Hugley finished 9-16 from the field, the rest of his teammates combined to shoot just 11-36. Capel thought his team put up open shots that just didn’t fall.

“We didn’t make shots,” Capel said. “I think it’s as simple as that. John [Hugley] was having his way. They started packing it in, started going under on ball screens, just really flooding everything down there and we got some good looks but just couldn’t knock them down.”

Following the Gopher burst, Pitt and Minnesota engaged in a rock fight. With points coming in short supply, the Panthers were clinging to a one-possession lead as the clock rolled inside of three minutes remaining.

Neither team would score again until the 30-second mark, when Pitt tipped a Minnesota miss back into its own basket, cutting the visitors’ deficit to one at 53-52. Up one with possession of the ball inside of 40 seconds left to play, senior guard Jamarius Burton dribbled the ball near midcourt until there were seven seconds left, then proceeded to miss a contested, fall-away jump shot.

The Gophers collected a defensive rebound and called timeout to set up a play for senior guard Elijah Stephens. He missed a driving layup, but Loewe soared in behind unsuspecting Panther defenders and tapped the ball back in for two points.

It was the only shot Loewe made all game.

The Panthers will get two days off this week before they travel to Charlottesville, Virginia, for their ACC opener against the Virginia Cavaliers. Tip off is scheduled for 8 p.m. ACC Network will broadcast the game.