‘As authentic as it comes’: Former coaches reflect on Pickett’s career 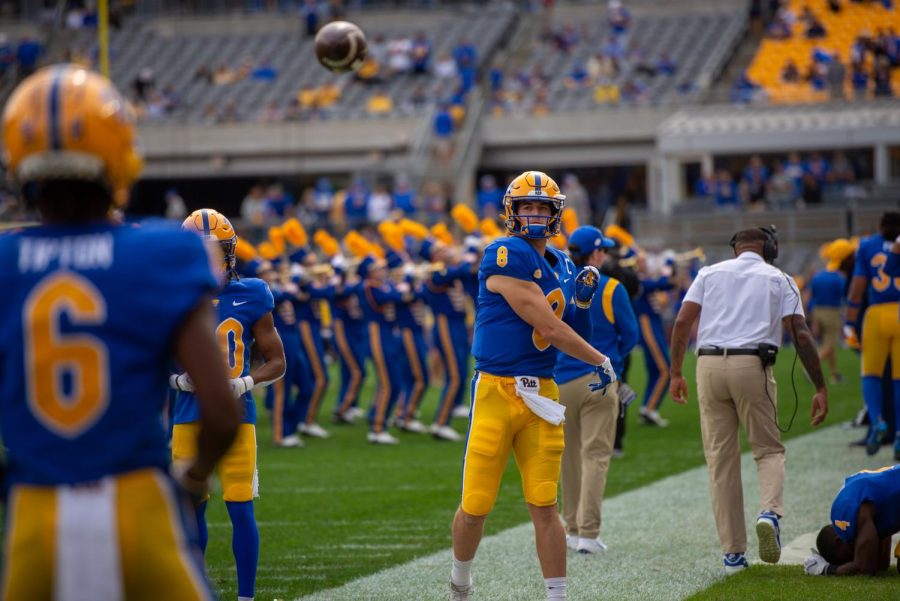 Kenny Pickett practices throwing the ball on the sidelines of the Pitt vs. UNH game in September.

OCEAN TOWNSHIP, N.J. — He surveyed the defense in front of him, before throwing a pass to an open receiver.

The receivers who Kenny Pickett, now Pitt’s redshirt senior quarterback, didn’t target came back to the huddle clamoring for him to throw the ball their way — claiming they were open. The quarterback looked around the huddle at the disgruntled receivers before lending them some sage wisdom.

“I have one football,” Pickett said, according to a coach who overheard the exchange. “I’m going to throw it to whoever gives us the best chance to score.”

This wasn’t a conversation he had this season. Pickett said this to his receivers when he was just 10 years old at Ocean Township High School’s youth summer football camp.

This is when Donald Klein — Ocean’s head football coach and the one who overheard the conversation in the huddle — knew this “kid from the Jersey Shore” wasn’t like anyone he had ever seen at his camp.

“He was just a really good athlete,” Klein said. “When you see him, initially, you see he’s more advanced than the other kids that age. He’s a smoother athlete. He can throw, he can run, he had good feet.”

Ocean Township High School in Oakhurst, New Jersey, has a fitting name, located just a few miles from the Atlantic Ocean. The 11-square mile town may not be the biggest in the area, but the town gushes in pride at their native son.

The town’s high school football field is a little different from where Pickett plays now at Heinz Field. There’s about 40 yards of bleacher seating behind the home team’s sideline and about 30 yards of seating behind the away team’s sideline. Including standing room, Pickett played his high school football in front of — at most — a couple thousand people.

Before Pickett and the game against Virginia — which Pitt won, clinching the ACC Coastal Division — some of the same people who saw him play in high school paid tribute to their former student and classmate.

Ocean Township Elementary School students and teachers wore shirts that had a Pitt football helmet emblazoned on the front and Pickett’s iconic No. 8 and “Pickett” on the back. Beneath the number, the shirts read “SPARTANLEGACY” — a tribute to his high school mascot, the Spartan. Klein said the shirts were a tribute to Pickett and all he’s done for his hometown.

There will be a sea of blue and yellow rolling through Big Red Country today! Supporting Oceans Own Kenny Pickett today throughout the district! @DPalaia @A_DePasquale48 @FootballPitt @kennypickett10 pic.twitter.com/Tmh4fDEhGw

“For Ocean Township, they get to see someone who went to the same schools as them, had the same teachers as them and had the same coaches as them come up and light college football and the world on fire,” Klein said. “For young people to be able to see that, they can put themselves in those shoes … he’s really a role model for everybody growing up. He’s somebody that we hold on a pedestal.”

Ocean Township has no other ties to Pittsburgh — it’s nearly a six-hour car ride to catch a glimpse of their former quarterback dominating the ACC. But this small town on the coast of Jersey with the “Big Red Country” moniker now proudly represents the Steel City. From blue and gold lawn flags to Pickett jerseys at school, the Spartans make sure Pickett feels supported in his hometown.

Tony Racioppi, Pickett’s personal quarterback coach who he trains with during the offseason, grew up in Ocean Township. Racioppi said it’s really special to see Pickett excel at the next level and inspire their hometown.

“It’s neat to see,” Racioppi said. “[The younger generation in Ocean] wants to grow up and be him. If that doesn’t say a lot about the player he is but also the kid he is — there’s never been a person that bumps into him that doesn’t think the world of him.”

Since leaving the Jersey Shore in 2017 to join the Panthers, Pickett has evolved into one of the most decorated quarterbacks Pitt fans have ever seen don the blue and gold. But it isn’t just what he’s doing on the football field that makes his town so proud of him. Klein said his character, humility and work ethic are what sets him apart, embodying what it means to be an Ocean Township Spartan.

“To have someone like Kenny Pickett who really is the epitome of the All-American student athlete come from your school and come from your program is a tremendous honor,” Klein said. “He’s been outstanding for Ocean Township to be able to have someone to root behind and root for … Kenny is the most humble person I’ve seen in that type of environment. He’s gracious with his time, he’s caring and he genuinely is appreciative of everyone that supports him.”

A finalist for the Johnny Unitas Golden Arm award and an option on the Heisman Trophy ballot, Pickett has taken the individual accolades in stride. The fifth-year has repeatedly said that the recognition is a tribute to his teammates just as much as it is to himself. Racioppi said Pickett isn’t putting on a facade of humility for the media, but he’s remained the same person he was before all of the recognition came.

Besides humility, Pickett possesses the innate ability to be someone that people look to for guidance. People either have the ability to lead a group of people or they don’t. Pitt Head Coach Pat Narduzzi has maintained all year that what sets this team apart from those from the past is the fact that the players lead the team.

By nature of being his team’s quarterback, Pickett has been the player others look to — whether that be how to handle success or an upset loss. According to Klein, Pickett’s leadership qualities are not exclusive to his time at Pitt.

“Kenny has the unique ability to motivate those around him in the right way,” Klein said. “Whether or not it needs to be an arm around you or a kick in the butt, whatever it is, Kenny is authentic as it comes with who he is and leading groups of people.”

“Kenny is just a special kid with an incredible work ethic that is hard to find,” Todd said in a prepared statement. “Most kids could not do the preparation and work that he has put in to be the quarterback he has become. Kenny is an outstanding leader who has earned every accolade that has come his way.”

The future NFL Draft Pick may not have won any New Jersey State Championships with the Spartans, but Pickett’s ability to inspire hope in Ocean Township is what makes him a legend in Big Red Country.

“There’s a theme here with him,” Racioppi said. “A, he’s a great player and B, he’s just a great kid. You just want to root for him — that’s family, that’s friends and that’s coaches. If there was a 7-year-old kid that walked up to him, he’d spend time with them and sign autographs — he would make that kid feel special. He’s always kind of gotten that … he doesn’t have to change who he is.”