‘Does not help our neighborhood’: OPDC discusses Walnut Capital proposal 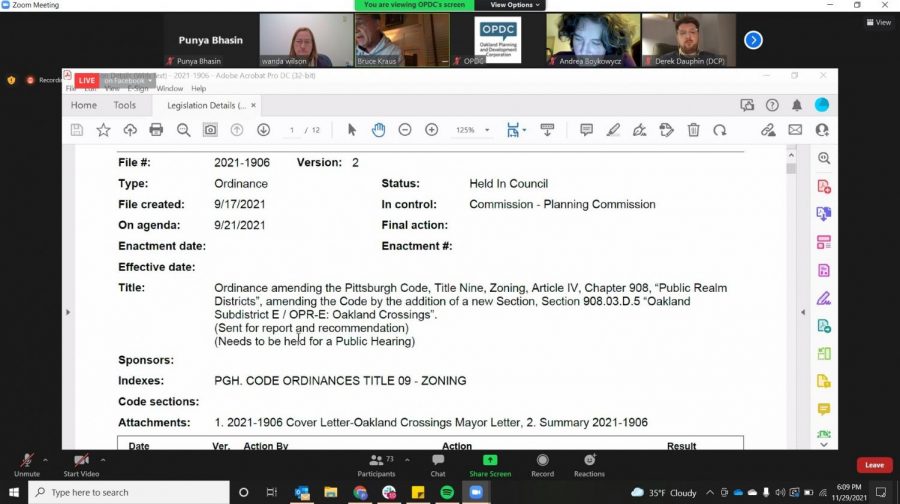 “Right now Central Oakland is not sustainable as we stand here today,” Kamin said.“There is no grocery store in Oakland today, there are no true amenities or businesses that serve people that live full time year-round in Oakland who are not students.”

Mayor Bill Peduto introduced the zoning legislation which would enable the plan, and the City Council voted in October to advance an amended proposal to the City Planning Commision. Many community members, including OPDC, denounced the proposal, arguing that Walnut Capital did not properly seek community input or consider the community’s needs.

Bruce Kraus, a member of the City Council who represents part of Oakland, opened the OPDC meeting by reading a statement from Dan Gilman, the mayor’s chief of staff, which said the legislation hopes to create an area not “aimed” toward students.

“This legislation creates an opportunity to expand green space, bring a new grocery store to Oakland, eliminate blighted properties, have walk to work housing, create new housing that is not aimed at students for the first time in years and to create a safer Boulevard of the Allies,” Gillman wrote.

At the meeting, many community members expressed strong opposition to the legislation. Ty Williams, a member of the South Oakland Neighborhood Group, said during his time running youth programs within the community, he saw many families lose their homes due to increased building of luxury residential housing.

“I’ve seen many families, programs and kids lose their housing, and they are all families of color,” Williams said. “After being evicted, I saw families try to find alternative housing, and folks said that they were unable to find anything that’s affordable without a long waiting list and these families end up evicted with the kids and parents separate from each other on the curb.”

Randy Sargent, another member of the South Oakland Neighborhood Group, said he believes the proposal will negatively affect low-income families.

“We’re losing our lowest-income families and those with kids here in Oakland, what you’re proposing will accelerate the loss,” Sargent said.

Kamin said Walnut Capital’s plan is to make Central Oakland more sustainable for the future by creating more residential areas for community members instead of students.

“You need to change that dynamic for Oakland, it’s going to continue to go on a downward spiral which it has been in terms of population loss, and it’s going to be completely if not, you know, 100% student population which is not a sustainable, viable option for Central Oakland,” Kamin said.

Michele Gorman, a community member in attendance, said Walnut Capital’s proposal is not compatible with the current neighborhood.

“I get it — it’s not sustainable, but you are replacing people already here with different people, and more long-term residents is great, but what happens to people already here?” Gorman said. “Your view is not our view, so your plan does not help our neighborhood.”

“We’ve had meetings separately on site with residents from cold targets. There are people that want good quality development, and we’re working closely with them to make sure that we don’t impact their quality of life,” Kamin said.

Kamin also expressed discontent with Wanda Wilson — OPDC’s executive director — who moderated the meeting. He said Walnut Capital was “sandbagged,” as they were not allowed to present their own slide deck instead of the publicly available legislation at the meeting.

“We were not permitted to show our presentation and we have not been provided in advance the data presented,” Kamin said. “It’s sandbagging that somehow this data that we asked for months and months ago, that nobody could provide, is now being presented. This is really unprofessional and inappropriate to show data to the public that has never been shared with us in the past, despite our requests.”

The meeting ended with more concerns raised from community members, especially about Walnut Capital’s specific building plans and strategies. Kamin said Walnut Capital’s strategies, such as installing generator plants, do not have or need a rational reason behind it.

“We want to be a leader in sustainability, not a follower,” Kamin said. “Anyone can nitpick through these things, there’s no rational or economic reason why somebody would put a large generation plant — you’re just using scare tactics, but the real use here and the intended use here is to use good, high quality, sustainable, mixed-use development.”