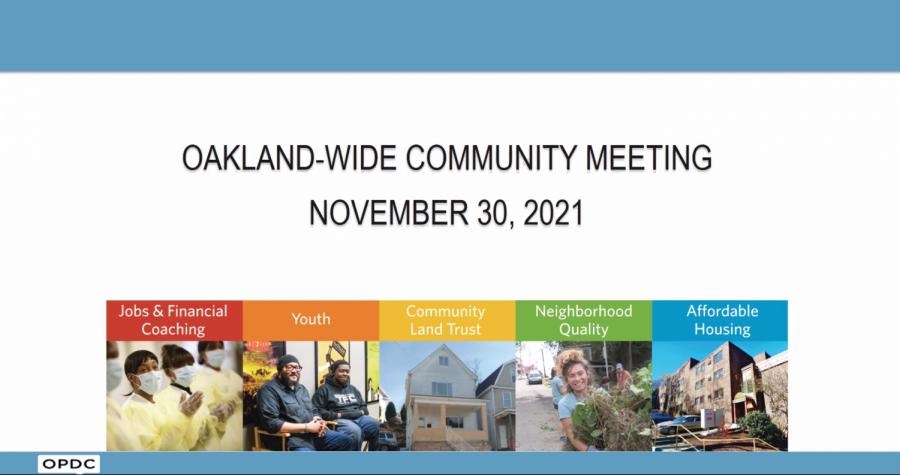 The Oakland Planning and Development Corp. held a meeting Tuesday evening to discuss plans for the new UPMC Presbyterian building and a 20-unit apartment complex.

Besides several plans by local developers to reshape Oakland, the neighborhood is also facing two other new major construction projects in the new year — a new UPMC hospital facility and a South Oakland apartment complex.

The Oakland Planning and Development Corp. held its monthly Oakland-wide community meeting Tuesday evening to discuss updated plans for the new UPMC Presbyterian building and a Paramount Construction Services plan to turn an office building on Ward Street into a 20-unit apartment complex. The meeting also served as the official design activities meeting for the UPMC project.

UPMC plans to construct a new building at the former UPMC Children’s Hospital site on Fifth Avenue and De Soto Street. It announced in May that construction will likely begin in summer 2022, and the building will open in summer 2026. The project team is made up of members from various engineering and design companies including HGA architects and engineers, IKM Inc. and Trans Associates.

The new Presbyterian Bed Tower will occupy around 900,000 square feet above Fifth Avenue  and will be 288 feet tall and no more than 17 stories. The building will include 636 beds for patients in the Intensive Care Unit, stepdown and discharge patients as well as a parking garage for 450 cars.

Bryan Cannon, design principal at HGA, said the building will include a “lifestyle village” — a large feature with three floors of accessible programming at the base of the building.

“You can come in and enjoy coffee at Starbucks or public education programs,” Cannon said. “The idea is that the hospital will not be read or experienced as a separate place, but as a building that is strongly connected and accessible to the community.”

The lifestyle village will provide the community with new resources and assets and is “the form of a handshake” between the hospital itself and the community, according to Kurt Spiering, vice president of HGA. Spiering said the village will also provide the patients and staff a separate, low-stress environment where they can find a sense of normalcy.

“We want to make sure patients, families and even staff who are working in this building for long hours and tending to patient needs have the abilities to just normalize for a brief moment and come to an area that has retail aspect or some sort of ability to get away from the stress that they are going through as a part of their patient care,” Spiering said.

Kyle Weisman, project manager at HGA, discussed the different sustainability, storm water management and environmental elements the project team focused on throughout the design process. He said the site will have about 20,000 cubic feet of storm water retention.

“Even though there’s a good amount of paving, there’s a lot of porous paving and pavers that allow for greater retention of water below some of the hardscape elements,” Weisman said.

Besides UPMC’s presentation, Tom Chunchick, the chief operating officer at Paramount Construction Services, presented Paramount’s plan to purchase a building at 3339 Ward St. in South Oakland and turn it into an apartment complex. Chunchick said while the plan is in the “preliminary” stage, the purchase is currently under agreement and, if all goes as planned, Paramount will close on the property in February 2022.

Chunchick said changes to the existing building include filling the attic space, adding in another floor and making the exterior more appealing.

The apartment complex will have two locations for parking — one location in the basement level of the building and a parking lot on Juliet Street, according to Chunchick. He said the basement-level parking will most likely be used for handicapped spots and drop-off, and the Juliet Street lot will provide about 40 parking spaces for tenant use.

Wanda Wilson — the executive director of OPDC, who moderated the discussion — presented a question from an audience member which asked how tenants will be charged for parking at the lot. The attendee also asked if tenants would be able to purchase a street parking permit from the City, since that would add cars to an already “over-subscribed” street parking system.

Chunchick said navigating parking is a challenge, but his team has not yet discussed the issue in full. He said he assumes Paramount will charge for parking through rent, not as a separate fee.

“On all of our existing properties, we do not charge for parking,” Chunchick said. “We do encourage people to use the parking lots and not utilize the streets for parking.”