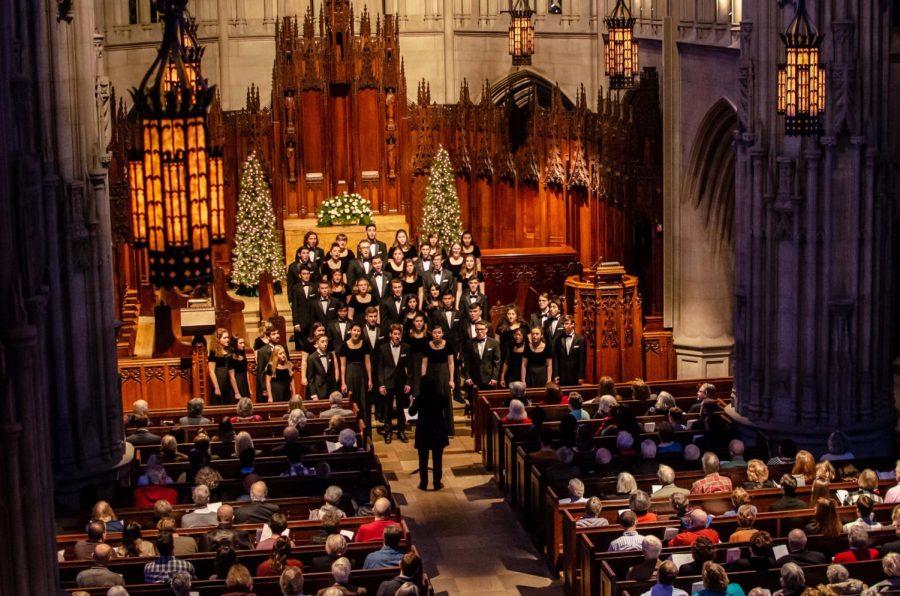 The Heinz Chapel Choir performs “To Make Music in the Heart” at their Holiday Concert at Heinz Chapel on Dec. 3, 2019.

By Ebonee Rice-Nguyen, For The Pitt News

The Pitt community can expect Heinz Chapel to be decked out in wreaths and tinsel this year as Pitt’s music ensembles prepare to return for their seasonal performances. After a year of performing from dorm rooms and over Zoom calls, students are looking forward to singing for live audiences once again in the upcoming holiday concerts.

The Heinz Chapel Choir, Men’s Glee Club and Women’s Choir will finally return to their musical holiday concerts starting Nov. 30 after a year of delays due to the COVID-19 pandemic. They performed online over Zoom in 2020 without audience members.

HCC will perform six separate concerts in Heinz Chapel. On Nov. 30th, the choir performed their first live concert of 2021 this year, which was free and open to the Pitt community. Heinz Chapel has been a part of Pitt’s campus since 1934, and student groups first performed in it in 1938.

HCC’s concerts consist of three sets, each with three to five songs. The songs differ in variety, featuring both modern and holiday classics. This season, the concert will follow the theme “Ponder the Treasure In Your Heart.”

The concerts also include songs that incorporate audience participation and interludes from Heinz Chapel’s organ. Due to COVID-19 restrictions, the performers will fill in the first couple of pews to follow social distancing regulations, rather than be separate from the audience.

Choir members and the audience this year are still required to wear masks. The number of people in attendance has also been reduced. There will also be a buffer of space between the audience and choir members during the performance.

“It’s just a really beautiful kind of moment where you’ve got all those voices circling you as a member of the audience and then the lights come up on the windows,” Rice said. “The whole building looks like it’s glowing … it’s just very intimate.”

According to Rice, this year’s concerts provide a stark contrast to 2020’s online venue. Rice said she studied the science behind COVID-19 and its transmission rate during vocal performances, and took this into account for safety reasons.

“A lot of the things that we knew about just navigating the virus, are all kind of exacerbated by singing because you expel more aerosol when you sing than when you just talk,” Rice said.

Last year, choir members could initially only perform in a tent on the Cathedral lawn, but eventually moved indoors as the weather changed. To protect everyone’s safety, Rice said she had to figure out how to approach indoor practices with COVID-19 cases rising.

For their 2020 holiday concert, the choir was not allowed a live audience and had to improvise. Rice said the groups recorded their performances in the chapel one after the other, taking breaks outside to allow for the air to clean.

“Our recording technician just layered those two recordings on top of each other. So it sounded like all 40 voices were singing together,” Rice said. “So we had the opportunity to be together in groups of 20, which was so much better than being alone in your room.”

Even with regulations in place, Rice said she sees how the concerts have changed some students’ lives. Rice remembered one sophomore who finally had the chance to perform the University’s alma mater for the first time with the whole choir.

“For this student, this really was the first time he had heard himself singing all together with the choir, all together in our performance space,” Rice said. “And it was hugely emotional for him. I had never paused to think about what that would feel like as somebody who navigated all of last year.”

Rice said she looks forward to seeing students experience the upcoming concerts, as many of them have never sung in the chapel before.

“I’m really mindful of what these concerts will feel like because it will be that experience that that student had with the Alma Mater times a thousand,” Rice said. “There’ll be a real audience with the music we’ve looked at all semester on the lighting, all of it coming together. I think it’s going to be really beautiful.”

Richard Teaster, the director of the Men’s Glee Club, shared the same enthusiasm as he worked to prepare for the Glee Club’s upcoming concert on Dec 11. at the First Baptist Church of Pittsburgh.

“I think that people take things for granted, you know, they realize now how much they miss having in-person music and being able to hear each other in a hall,” Teaster said.

Unlike Heinz Chapel Choir, Teaster said Glee Club was unable to perform in person at all last school year and lost members because of this.

“The first semester was completely just virtual video performances. We didn’t do any live singing at all,” Teaster said. “We lost a lot of members because it’s hard to want to be a part of a choir when you can’t sing in person with each other.”

With the year-long absence from the stage, Teaster said club members are looking forward to being in front of a crowd once again.

“I think it’s definitely channeled people’s energy and commitment level more. Rather than just taking these things for granted and just kind of going through the motion,” Teaster said. “I think everyone is a lot more psyched to be there and to be involved in it. You can kind of see that enthusiasm reflected in the community.”

Teaster said the Glee Club has prepared for the annual holiday concert this year by offering a music selection that ranges from American classics to songs from the swing era.

“If they don’t really like classical music a whole lot, we do barbershop, we’ll occasionally do popular tunes,” Teaster said. “It’s a wide cornucopia of music.”

Rhia Godhania-Carter, a member of the Pitt Women’s Choral Ensemble, said these performances are extremely important to the student body.

“It’s important for kids in the community to know that they can perform music and pursue music at the collegiate level,” Godhania-Carter said. “It’s important to showcase something other than grades, statistics and GPAs.”

Teaster said he believes that the concerts allow students an opportunity to pursue a kind of creativity their studies may not provide.

“I think we kind of show a different side of Pitt because it gives the opportunity for people to see other sides of the students,” Teaster said. “Maybe more creative sides that, that perhaps you might not initially associate with as a research university.”

A previous version of this story referred to Men’s Glee Club’s director as Richard Teaser. His name is Richard Teaster. The article has been updated to reflect this change. The Pitt News regrets this error.