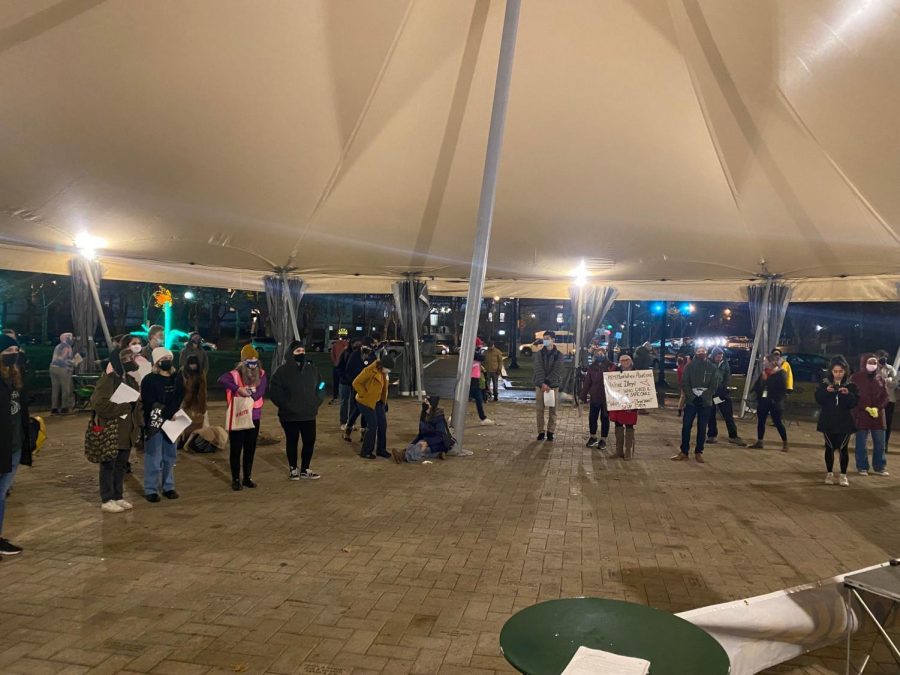 A crowd gathered under the tent at Schenley Plaza at a rally for abortion rights on Wednesday evening.

As Sofia Sunseri sat down on a temporary stage under the tent at Schenley Plaza, preparing to begin her speech with microphone in hand, she made it clear to the crowd how she felt about arguments being made against abortion rights at the Supreme Court.

“I’m really f—ing pissed off right now,” Sunseri said. “So I’m guaranteeing you that I will swear and I will cry.”

Sunseri and several other speakers addressed a mix of roughly 40 Pitt students and other Pittsburgh residents on Wednesday evening at a rally for abortion rights, organized by Pitt’s Planned Parenthood Generation Action club. Alexa Pierce, the club’s president, said the goal of the rally was to raise awareness of attacks on abortion rights and to make sure that abortion rights advocates are heard.

Pierce said the club started planning the rally a couple weeks before Thanksgiving break. She said Dobbs v. Jackson Women’s Health Organization — a case the conservative-majority Supreme Court is currently considering, which could overturn Roe v. Wade, a 1973 Supreme Court case that ruled abortions to be legal under the “right to privacy” from the 14th amendment — motivated the PPGA club to hold the rally.

“For several reasons, the ruling that will come from this case is extremely important,” Pierce said. “Not only for us college students, as we are the most popular age group to seek out abortion care, but for those living in areas where reproductive care is severely limited and becoming more scrutinized as we speak.”

Oral arguments began Wednesday in the Dobbs case, which involves a 2018 Mississippi law that restricts most abortions after the 15th week of pregnancy. Jackson Women’s Health Organization, the only licensed abortion clinic in Mississippi, challenged the constitutionality of the law. The U.S. District Court for the Southern District of Mississippi held that the law was unconstitutional, but Thomas Dobbs, the state health officer of the Mississippi Department of Health, appealed to both the U.S. Court of Appeals for the 5th Circuit and later the U.S. Supreme Court for review.

Besides Sunseri, other speakers at the event included a board member from the American Civil Liberties Union club at Pitt, a representative from the Western Pennsylvania Fund for Choice and a patient advocate from Planned Parenthood.

The attendees ranged widely in age, from a baby in a stroller to older Pittsburgh residents. One protester held a sign that read, “I remember when abortions were illegal,” “Ask me who died and who got safe ones” and “Making abortions illegal won’t stop them.”

Sunseri, who told the story of her two abortions — one at 19 and another at 23 — said abortion should be considered nothing more than a medical procedure that is private and does not involve legislators or the Supreme Court.

“From the very beginning they treated me like a patient calling with a medical condition … It was just a medical procedure,” Sunseri said. “For that’s what it is. This was a private matter between me, my partner and my doctor — that’s it.”

Maddison Bakker, a first-year student at the Pittsburgh Institute of Mortuary Science who attended the rally, said she was impressed with the turnout despite the unpleasant weather.

“It’s crazy how many people did show up, even though it’s so cold and rainy,” Bakker said. “I just think that means people are really passionate about that here, and it’s great to see so much of the student body of Pitt come out to support this.”

Volunteers mainly ran the rally, with some including members of the PPGA club along with others. Volunteers also ran the merchandise table — passing out items such as pins, hats, gloves, posters and T-shirts, many bearing the slogan “Bans off our bodies” — and solicited donations for the Western Pennsylvania Fund for Choice and asked attendees to sign up to volunteer for Planned Parenthood.

The official speakers weren’t the only ones voicing their opinions out loud. The crowd booed and hissed at mentions of crisis pregnancy centers, which often have religious anti-abortion missions. The attendees also chanted several slogans led by various speakers, including “Stand up! Fight back,” “Working women give ‘em hell! It is right to rebel” and “Imperialism deserves to die! Women hold up half the sky.”

Bakker said she found out about the rally from an Instagram story of a friend who is a Pitt student. She said she had been hoping to take part in a rally for abortion rights since moving to Pittsburgh from Franklin, Pennsylvania, and that abortion rights are important to her personally because of her past experiences.

“I’ve been wanting to take part in a couple of rallies or something now that I’m finally in the area that has them,” Bakker said. “Just for my own personal story, I was sexually assaulted when I was in high school and thankfully, I did not end up pregnant, but I’ve always felt that if I had been pregnant, then I would not — I can’t imagine myself being able to go to college and move out here.”

Sunseri said regardless of whether or not the Supreme Court overturns Roe v. Wade in the Dobbs case, abortion rights advocates will continue to fight.

“No matter what the decision from today’s case turns out to be, we will not give up,” Sunseri said as she teared up. “I will not give up, for I know how important this choice is. I will stand and speak up at every opportunity, telling my story and supporting anyone who wants to tell theirs with pride.”

A previous version of this story referred to Sofia Sunseri as Sophia Sunseri. The article has been updated to reflect this change. The Pitt News regrets this error.