Column | ‘We, Not Me’: How Pitt’s offensive success has been a true team effort 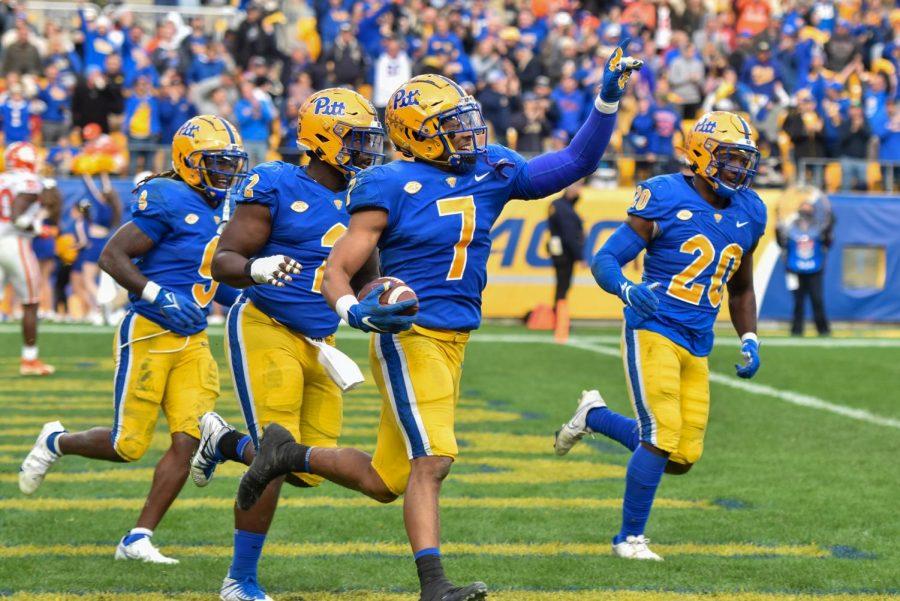 Pickett has blossomed into, perhaps, the best football player in the country in his final season at the helm for the Panthers and is a legitimate Heisman Trophy candidate. Addison’s breakout season has placed him as a frontrunner for the Biletnikoff Award, which recognizes the nation’s top wide receiver. But for an offense this prolific, the recognition must extend beyond two players.

The Panther passing attack is currently the best in program history, but it’s important to first acknowledge the role the ground game has played in opening up the field for Pickett. Pitt totaled just 1,319 rushing yards and averaged a lackluster 3.4 yards per attempt in 2020. Narduzzi came into this season in search of a true single workhorse to lead the rushing attack.

What Pitt has found instead is an extremely effective committee of running backs, all of whom have greatly contributed to Pitt’s improvements running the football. The Panthers improved to 1,873 yards on a much more efficient 4.1 yards per carry, with all three of their main ball carriers totaling more than 450 yards each.

Junior running back Vincent Davis led Pitt in rushing last year, and while his touches have reduced slightly, he has been far more consistent and effective as the season has progressed. Davis provides sure hands and reliable blocking in the passing game and has been fairly effective as a scat back in the run game.

Between the tackles, Pitt has relied on first-year tailback Rodney Hammond to pick up tough yards and move the chains for the Panthers.  He’s done so effectively, averaging 5.2 yards per carry. Hammond’s downhill rushing style and willingness to fight for extra yards at the end of runs have greatly contributed to Pitt’s ability to control the time-of-possession late in games.

Finally, many pegged sophomore running back Israel Abanikanda as a major breakout candidate heading into the season. While he’s shared touches with the other two backs, he has been the most efficient and explosive running back for Pitt in both the running and passing game. Abanikanda’s big play potential adds an extremely valuable final dimension to a complete and well-rounded Pitt backfield.

Pitt fans may have grown used to workhorse running backs in the past, but this cohesive trio of rushers is perhaps more effective than one dominant rusher. In offensive coordinator Mark Whipple’s balanced, pro-style offense, establishing the run is essential to unlocking the passing game and Abanikanda, Hammond and Davis have done just that.

Improvements in the run game can also be largely attributed to a solid, experienced offensive line. There were several questions for the Panthers after the loss of several starters up front, namely center Jimmy Morrissey. But many different players have stepped up for Pitt and its depth has proved to be an essential quality.

Pitt’s offensive line contains a mix of seasoned veterans, such as senior tackle Carter Warren and junior guard Jake Kradel, along with new starters, such as graduate transfer Marcus Minor and senior center Owen Drexel. The Panthers have suffered several injuries up front, but their depth has been pivotal in keeping those injuries from inhibiting the success of the offense.

The offensive line has also kept the pocket fairly clean for Pickett, allowing just 2.17 sacks per game, good for a tie for No. 4 amongst ACC teams. Pickett’s time to operate in the pocket, combined with his individual ability to extend plays with his legs, is a large part of the foundation of Pitt’s offensive success.

The final piece is the remarkable pass catchers.

Sophomore receiver Jared Wayne has emerged as a solid, sure-handed possession receiver and moves the sticks consistently with big catches in crucial situations. His role has expanded due to the injuries of senior receiver Taysir Mack and sophomore receiver Jaylon Barden, both of whom are also key pieces to the passing attack when healthy.

Senior receivers Shocky Jacques-Louis and Tre Tipton have also shown improvement and consistency. The overall strides taken by every receiver on Pitt’s roster this year can be largely attributed to new wide receivers coach Brennan Marion. But wide receivers are not the only key pass catchers on the roster.

The final piece of Pitt’s offense is its excellent tight end group. After years of searching for consistent tight end play, the Panthers now feature two All-ACC caliber players at the position. Senior tight end Lucas Krull came on strong at the beginning of the year, and has remained one of Pickett’s favorite red zone targets.

First-year tight end Gavin Bartholomew has also added an entirely new dimension to Pitt’s offense with his emergence. Bartholomew has become a dynamic player after the catch, using his physicality to break tackles and create big plays. This physicality also makes him a very good blocking tight end, and he frequently slips out of his blocks in the redzone for touchdowns.

While Pickett and Addison deserve all the credit they’re receiving and more, the Panther offense is more than a two-man job. Depth, consistency and complementary skill sets from all of Pitt’s position groups are all huge reasons for its success.