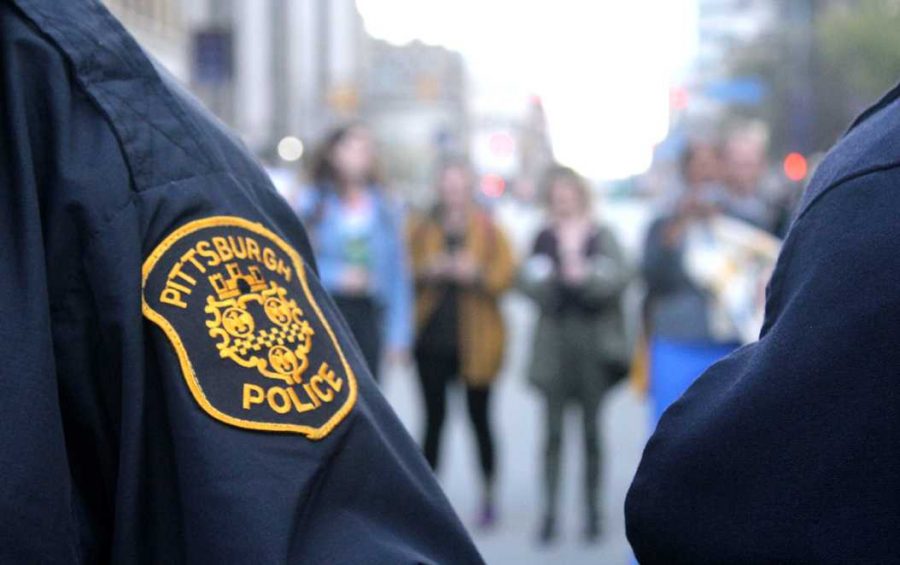 A City police officer faces a line of people.

While Pitt football prepares for the ACC Championship, its biggest game of the season, Pittsburgh Public Safety is making extra preparations for rowdy celebrations at home. The game is taking place in Charlotte, North Carolina, but City officials said they expect large crowds and parties in Pittsburgh as well.

“We appreciate that this is a big game for Pitt and that many more fans than usual will likely be coming out to support the team and hopefully celebrate a win,” Public Safety Director Wendell Hissrich said in a statement. “However, there will be zero tolerance for property damage or violence of any kind and police will be on high alert for impaired drivers.”

Cara Cruz, a spokesperson for the Pittsburgh Department of Public Safety, told the Pitt News that residents will see not just an increased police presence, but an increased number of non-police public safety personnel such as paramedics and firefighters.

“It is safe to say that students will notice an increased presence of public safety personnel, not just police, in the areas around campus,” Cruz said.

Pittsburgh and Pitt police, along with the Pennsylvania State Mounted Unity, will have extra officers on patrol, in addition to mounted, motorcycle, bicycle and K-9 units in Oakland and on the Southside, according to Pittsburgh Public Safety.

The Pittsburgh Bureau of Fire and Bureau of EMS will support the Department of Public Safety’s efforts as well. They will also be setting up light towers in busy areas that might need extra lighting.

“Out of an abundance of caution, we have arranged with City police to have extra officers on duty to ensure a safe environment for any students who may be celebrating,” Pitt said. “We would remind all members of the Pitt community of our celebrate responsibly campaign, and we hope everyone has a good time and enjoys the game.”

The No. 15 Panthers and their opponent from the Atlantic Division, No. 16 Wake Forest, are scheduled to kick off the conference title bout at 8 p.m. ABC will broadcast the game nationally.